New Zealand were far too strong at Eden Park in Auckland for new look France team in First Test winning 52-11.

Bruising All Blacks forward power was unleashed on the vaunted French defences opening spaces out wide which New Zealand hammered in a five-try 14-minute blitz which rocked the visitors who lost the first Steinlager Series Test 52–11 at Eden Park in Auckland on Saturday.

By the end of the game there was a look similar to the Rugby World Cup quarter-final extravaganza in London in 2015 when the All Blacks won 62-13, especially in the manner they dissembled their opponents' structure.

Much of the pre-game talk was of a potentially changed All Blacks style. If that was the case it was like back to the future as play after play saw the All Blacks spinning the ball wide in the time-honoured, almost out-of-date, backline fashion, albeit with their modern variations.

Yet, also it was the power of the forward assault that laid the foundation and fitting that the final try of the game was a demonstration of that power as replacement flanker Ardie Savea drove at the line and was then dumped over by his supporting pack.

If this was to be a sign of a French revival, it is a case of back to the drawing board so comprehensive was the All Blacks' performance.

The second half pressure was unrelenting, committing the French to most of the time in their own territory, and when they did get out wing Rieko Ioane intercepted a pass and ran 80m for his second try.

Having tried to implement more of their running game in the first half but stymied by what could best be described as 'first Test frenzy', the home side's rustiness saw a lack of the usual cohesion, resulting in mis-timed passes, the first of which produced the game's opening try, against the run of play.

But if the All Blacks were guilty of not securing the ball as often as they would have liked, the French also appeared over-anxious close to the line, dropping ball of their own in the face of strong All Blacks' defence.

Six minutes into the game, the French made ground after a break by right wing Teddy Thomas. When the ball was transferred across to the left wing, the tackle was made and ruck formed. The ball dropped out the French side with no-one in position to use it. 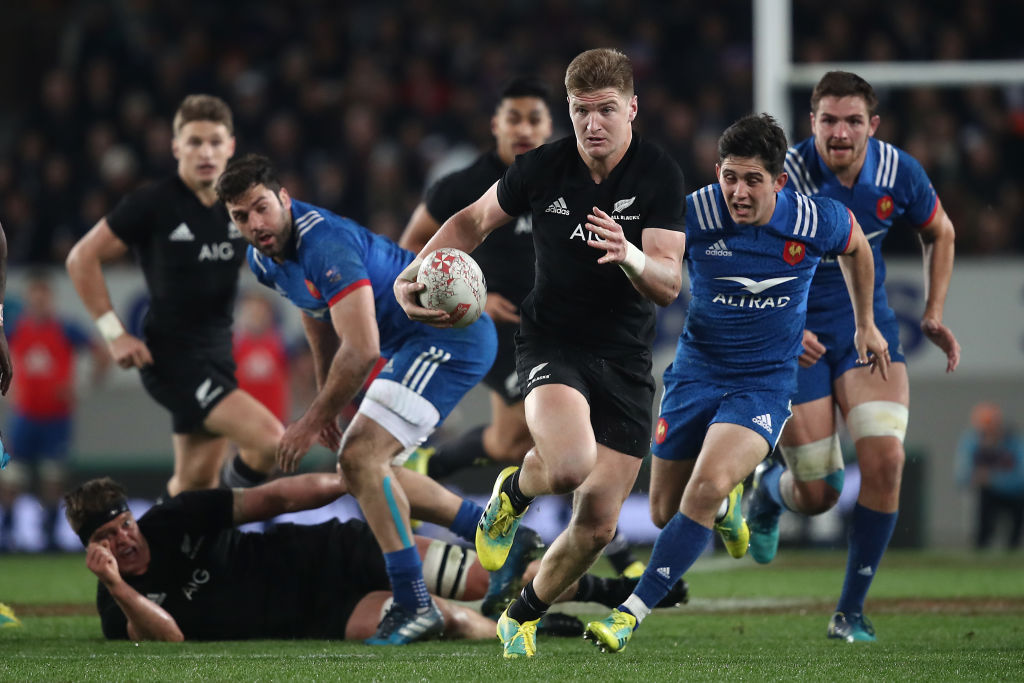 All Blacks wing Ben Smith played the ball and tried to pass to fullback Jordie Barrett on the sideline, but French wing Remi Grosso seized the ball and ran 30m uncontested for the opening try.

The Barrett effect came into play in the 21st minute when lock Scott fed fullback Jordie into a gap. Second five-eighths Ryan Crotty was in support but grounded short of the line. Lienert-Brown played halfback to see Beauden Barrett cross in the corner.

A 37th minute try looked to have been scored by Lienert-Brown after he bumped off a tackler following another Crotty break. However, a check of video footage revealed halfback Smith had been in front of the play and had blocked a defender from making a tackle attempt.

New Zealand were under penalty advantage and ran the ball but the French defence held until lock Sam Whitelock was held up over the line just after the halftime siren sounded.

In the second half it was a clear New Zealand tactic to apply the pressure with direct running at the French pack. It proved effective and while again it took time to settle, the striking arrival of substitute Karl Tu'inukuafe could not have been more timely.

He came in to scrum which saw the French team pushed off the ball to earn a penalty chance which Beauden Barrett converted.The French lost lock Paul Guabrillagues when a high tackle on Crotty saw him sin-binned but it proved crucial as the All Blacks continued to maintain pressure and when Barrett slipped a left-footed kick through to the corner hooker Codie Taylor secured the ball and scored in the 52nd minute – a try that opened the floodgates.

Three minutes later, after the restart, the French cleared the ball to halfway but Beauden Barrett took the ball and threw infield to Jordie with the ball passing through Ben Smith, Lienert-Brown, Taylor, Crotty who returned to Taylor and he found Smith inside him for the try.

There was no respite for France when penalised, after numerous warnings for closing the gap at the line, a penalty took play close to the line and from the maul, the French defence was sucked in, a point used by Aaron Smith to run blind, draw the defence and release the ball to wing Rieko Ioane for a 61st minute try.

The All Blacks' bench continued to prosper with Damian McKenzie replacing Jordie Barrett to find himself on the end of the line after No.8 Luke Whitelock ripped the ball free from the French in a tackle. McKenzie sped into a gap and left the French defence falling over themselves in a 50m run to the line.

Three minutes later, in the 66th minute, McKenzie was in the action again, this time on the end of a long pass from Beauden Barrett. He made ground then fed fellow replacement Ngani Laumape who bullocked his way through the defence to get over for another try.

It was a comprehensive start to the All Blacks' season and one that defied all pre-game predictions.