First Test: Springboks Come From Behind to Beat England

Springboks come from 21 points behind to overhaul England and then hang on to win a sensational match 42-39 at Emirates Airline Park, Johannesburg.

The character shown by a team full of inexperienced players and some tactical changes on the field were two of the main reasons Rassie Erasmus felt the Springboks managed to overturn a significant deficit to beat England by 42-39 in the opening Test of the Castle Lager Incoming Series at Emirates Airline Park in Johannesburg.

England started with a bang and raced to a 24-3 lead in the opening quarter, thanks to three converted tries and a penalty goal, but SA Rugby’s Director of Rugby said they made a few tactical adjustments, which stared the comeback.

By the break, the Boks were ahead by 27-24 after a brace of tries by Sbu Nkosi, who was on debut for South Africa, as well as Willie le Roux and Faf de Klerk, both of whom were back in green and gold for the first time since 2016.

Aphiwe Dyantyi, also on debut, scored in the second half, and Handre Pollard added four conversions and three penalty goals for a personal haul of 17 points.

“It certainly wasn’t the start we wanted in our first Test at home and I was worried, because we had a lot of young players against a very experienced England side,” said Erasmus.

“It certainly could’ve gone from bad to worse, but credit to Siya (Kolisi), Duane (Vermeulen), Beast (Mtawarira) and Handre (Pollard), our senior players, for getting us back on track. Still, we only scraped through in the end and we made too many errors, so there is a lot for us to work on.

“When we managed to keep the ball, England were under the same stress we were early in the game. I’m proud of the guys – they showed character and it’s something we can take forward.”

Kolisi, who captained the Boks for the first time, said: “I was very nervous as we didn’t expect to have such a tough time early in the game, but we have guys who had been in situations like that before.

“Credit to the new caps, because they didn’t panic and showed they just wanted to play, so we decided to take control of the game and it worked.

“Everything came together for us, the nerves were gone, we managed to get into sync and do those things that we know we can do well. We obviously would have wanted to start better today, but the character the guys showed was amazing.” 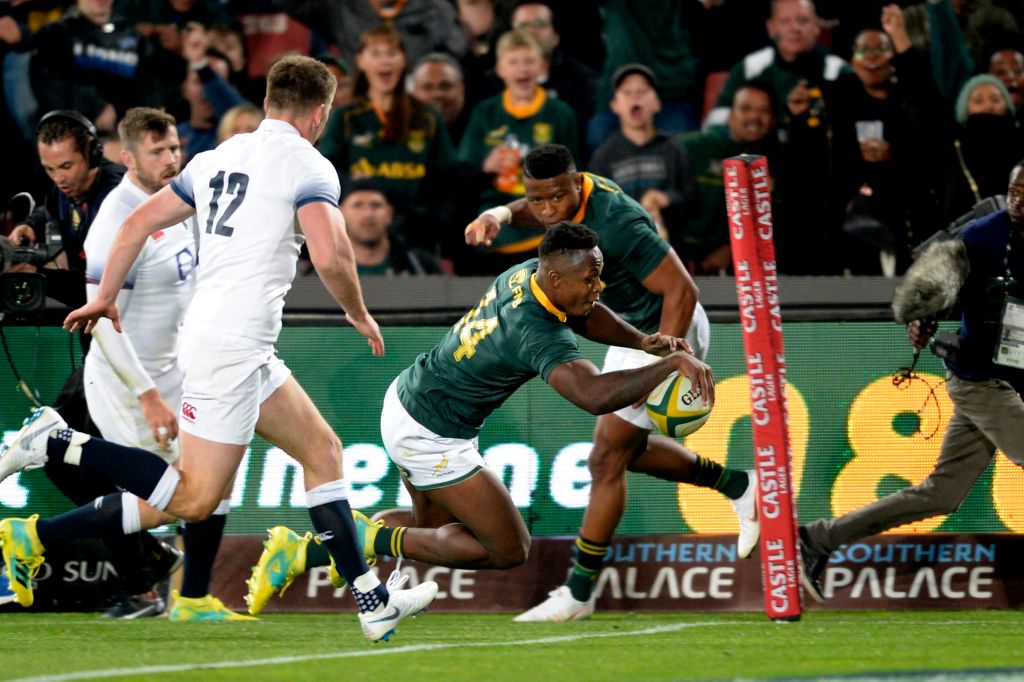 Erasmus said he expected England to kick more, and they were a bit surprised when the visitors attacked the wide channels with relative ease.

“It was a tactical mistake on my part, but as soon as we realised we needed more width on defence, and the players adapted on the field, things started going our way,” said Erasmus, who admitted that the Boks will have to make a number of “brave decisions” in the next couple of months.

“When you have such a big number of players with very few Test caps, a lot of work will have to be done,” said Erasmus.

“If we had lost, it would’ve created doubt, but it will be a bit easier now to get consistency in selection. Still, we will have to try a few things next week and we will have to make big calls going forward, which probably means we’ll lose some matches, but we have to get players exposed to Test rugby and see if they have what it takes to make it at this level.

“Our replacements all went to the USA last week and I expected them to run out of steam a bit after some time, but all of them made a big impact.

“There were some great individual performances, but we still made too many unnecessary errors and we have a lot to work on. Looking back, we probably got out of jail free today, but just as they could have put us away, we could have put them away.