The Wallabies down to 14-men after 14 minutes outscored Wales three tries to two but lost  in the final minute.

The Wallabies have suffered an agonising one-point loss in their final match of the 2021 Test season, after going down to Wales 29-28 in Cardiff.

Australia struck early in the match to set up the high-intensity clash, with a grubber kick from Hunter Paisami allowing Andrew Kellaway to cross for the game's opening try, and his ninth for the year. [pictured below]

The home side were quick to strike back as Dan Bigger reduced the margin for Wales before a red card to Rob Valetini in the 14th minute forced the Wallabies to play a man down for the remainder of the match.

Australia were then reduced to 13 men after a yellow card to Kurtley Beale for a deliberate knock down in a tackle. The home side crossed for their first try of the match, as they took advantage of the two-man advantage.

However, the Wallabies were resolute in their attack and O'Connor kicked a penalty to level the scores before another three points to Bigger gave Wales a 16-13 lead at the break.

Wales were first to strike in the second half with Nick Tompkins snatching a try to extend the home sides lead, in one of the game's major talking points. 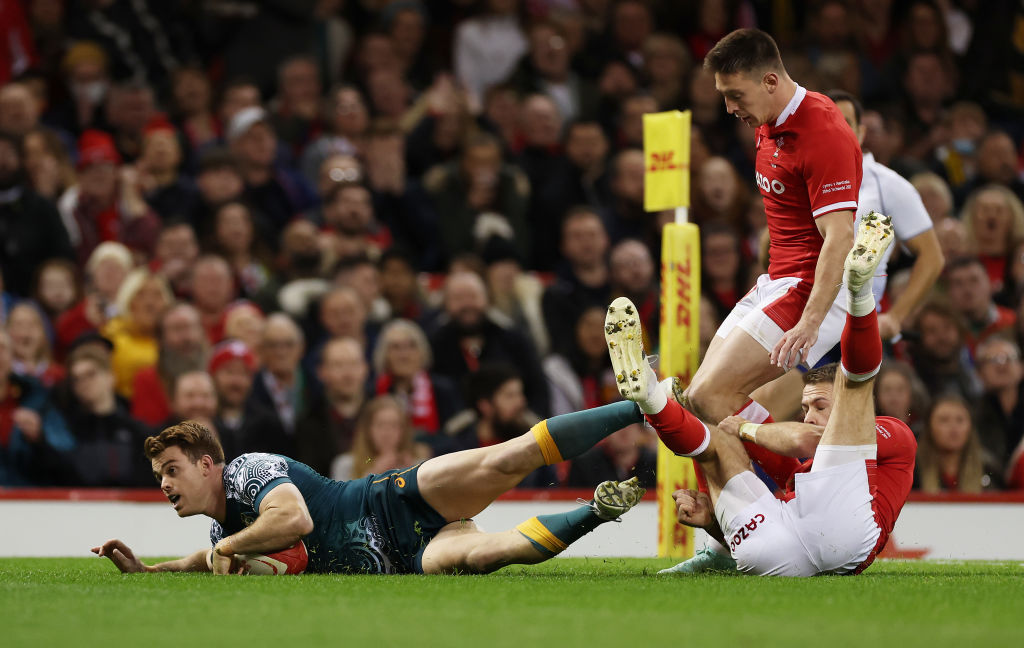 The hosts were then reduced to 14 men after a yellow card to Gareth Thomas, which provided the Wallabies with another opportunity to capitalise.

Nic White was next to cross for the Wallabies after an enterprising move from Kurtley Beale inside their own half, before Filipo Daugunu found a try the corner shortly after to put Australia within a point.

James O'Connor hit the post with the conversion but Beale stepped up soon after to provide some Wallabies heroics. The fullback kicking over a penalty from 45 metres out to edge the visitors in front with two minutes left to play.

It was heartbreak for Australia though as Wales struck back after full-time with replacement Rhys Priestland landing a penalty to give the hosts a one-point win.