The Springboks won the series in the final few minutes of the Third test in cape Town thanks to a late Morne Steyn penalty.

Twelve years ago, Steyn kicked a famous penalty goal to help the Boks clinch the most anticipated Series in world rugby and he turned back the clock with the second of two successful kicks at goal. The Boks then had to hold on, which they did thanks to a powerful scrum, to earn the series victory.

As much as Steyn's short stint on the field - he replaced Handré Pollard with 15 minutes to go - was telling, as destructive was another Cheslin Kolbe try 57 minutes in, and dominant Bok scrumming efforts in the last quarter of the match.

The Springboks were trailing 10-6 at the break and a much improved second half effort eventually saw them home. It was Kolbe's surgical intervention in what has now become a trademark run to the line that put the Boks in the lead for the first time. The winger ran around would be tacklers as if non-existent and dotted down for the most crucial of tries.

The Lions traded three more penalties with the Boks, after that, every time to draw level, but with three minutes left, conceded the penalty that would split the two sides over a three-Test battle that was fought until the bitter end.

The match started as the previous two with the aerial battle not abandoned at all. The first two South African bombs were won back, but with no real advantage and when scrumhalf Ali Price hoofed into the air, the Boks went offside, but flyhalf Dan Biggar missed the kick to the left after three minutes in.

The Springboks had a great attacking opportunity to score six minutes in. A good attack down the left saw Lukanyo Am being tackled five meters short, but the next pass was dropped. Advantage was played by referee Mathieu Raynal and the Boks were awarded a penalty for offside play by the red team.

Pollard slotted and the Boks were 3-0 up. Biggar who was involved in the Am tackle, cried off after that and Finn Russell took his place 11 minutes in.

The Lions' replacement flyhalf was quick into action with a penalty goal four minutes later. The Bok scrum was penalised just outside of their red zone and the Scotsman kicked his first points of the series to draw scores level.

That soon became a lead to the Lions as Ken Owens was driven over from short range. The Boks were penalised for a high tackle and Russell kicked to the corner. The Boks seemed to check the first Lions drive, but a second shove saw no resistance and Owens scored. Russell's conversion was spot-on for a 10-3 lead after 20 minutes.

The Springboks' discipline was not great at this stage, given Lions attacking opportunities galore. They opted for the lineout again, but the next one did not yield results though as they were penalised, and the Boks could escape. South Africa were under pressure at this stage with very little territorial advantage. 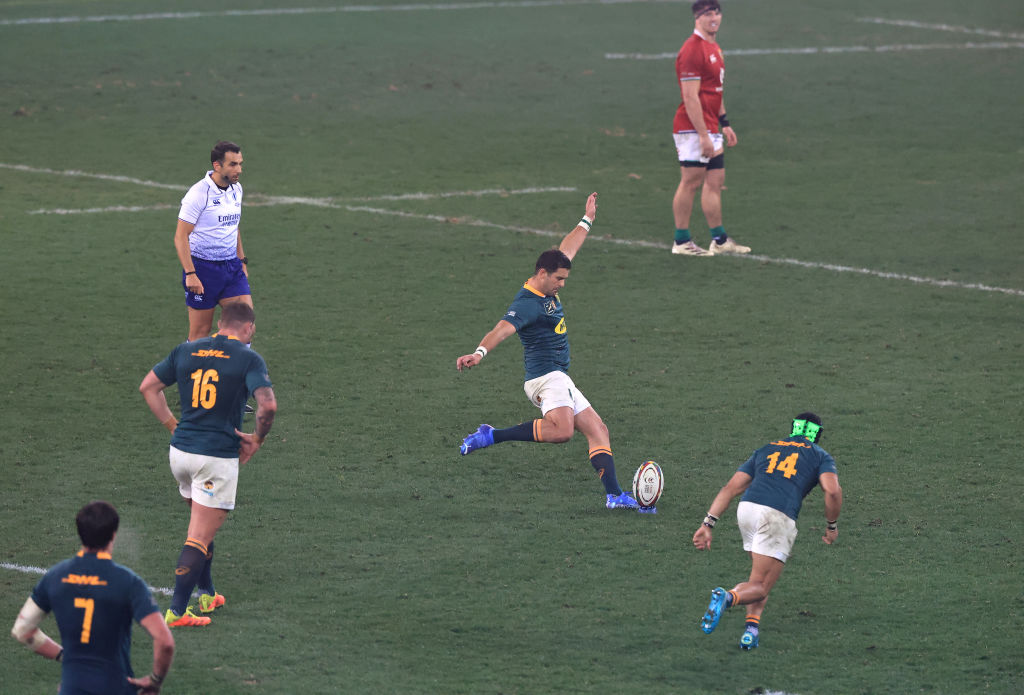 The defining moment - the Steyn penalty that won the Series

Another promising Lions attack came to nothing as Damian de Allende turned the ball over and Eben Etzebeth also manage to steal a crucial lineout near his own line. Having made over 80 tackles in the half, the 10-6 score line was a moral victory for the Boks at the break.

The second half started well for the Springboks. They gained the ascendency on attack and the Lions defense was penalised twice by Raynal. The first time the Boks went for the attacking lineout, but it yielded no results, while the second, a penalty attempt by Pollard rebounded off the post with another no result.

The Springboks clearly had more intent at this stage but there was not enough thrust in their attacking efforts. The next opportunity for points, when Kolbe was taken high by Russell, 52 minutes in, gave Pollard yet another chance to redeem his previous effort. The Bok flyhalf missed again.

Kolbe then worked his magic of making defenders look silly. Pollard kicked the conversion, and the Boks regained the lead after 57 minutes.

The second half was turning into a nailbiter. Russell kicked a 46-meter effort after Jasper Wiese was ruled offside and Steyn, who just replaced Pollard at flyhalf, got a first look at the sticks a minute later. He slotted the penalty goal and after 65 minutes the Boks had the lead again.

The Lions had a penalty right in front of the Springbok poles after 70 minutes and instead of levelling the scores opted for a line-out drive. That was stopped as the Lions were held up over the line. From the resulting scrum South Africa was awarded the penalty that allowed Steyn to clear the danger.

But not quite as a turn-over gave the Lions another penalty and this time Russell slotted to draw scores even again at 16-16. The Boks had one more surge and it proved vital.

Herschel Jantjies chased one high in the night sky and from the resulting melee, the Boks found themselves on the right side of the penalty. Steyn then slotted the series winning penalty.

The Lions had one more go, but another powerful Bok scrum resulted in a South African penalty. The rest as they say, is history.