Powerhouse prop Taniela Tupou has been named to return for the Wallabies Second Test against England at Suncorp Stadium.

The Wallabies will recognise NAIDOC week by wearing their First Nations jersey for the first time in 2022 in Meanjin (Brisbane) and will also sing the national anthem in Yugambeh language as they pay homage to Uncle Lloyd McDermott, the first Wallaby to identify as a First Nations man.

Tupou's return is one of seven changes to the matchday 23 that defeated England in Perth, with Brumbies tall timber Nick Frost in line for a Test debut, named as lock cover off the pine.

Queensland star Jordan Petaia will start his first Test at fullback with Tom Wright due for his first appearance in a Wallabies jersey in 2022 on the right wing.  Marika Koroibete takes his familiar position on the left edge.

Tupou is joined up front by last week's debutant David Porecki and loosehead prop Angus Bell, who plays his 18th Test at just 21 years of age.

Matt Philip comes into the starting second row and will partner Cadeyrn Neville after Darcy Swain was suspended for two weeks following his red card in Perth last weekend. 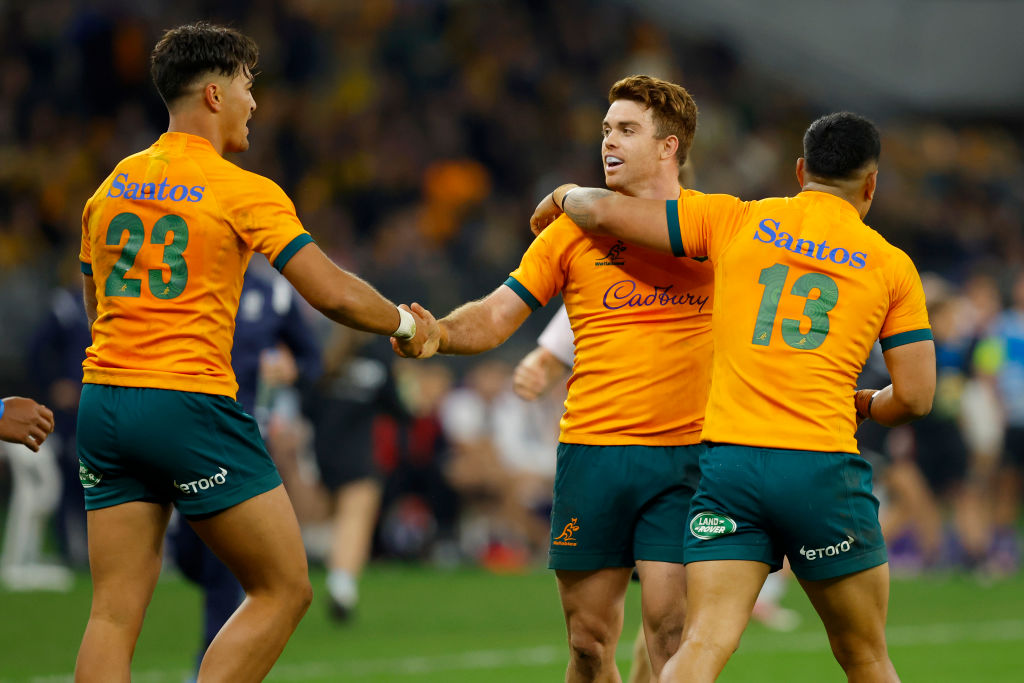 Andrew Kellaway [centre] one of several injury problems for the Wallabies

Noah Lolesio retains the number 10 jersey after a composed performance in the opening Test last weekend and will again partner Brumbies teammate Nic White in the halves.

Inside centre Samu Kerevi returns to Suncorp Stadium, having his made his Wallabies debut against England at the same venue in 2016.  He will combine with hard hitting Reds centre Hunter Paisami who replaces Len Ikitau at outside centre.

The athletic Nick Frost is in line to become Wallaby number 953, named as a potential debutant in the number 19 jersey.  Last weekend's try-scorer Pete Samu will again cover the backrow.

NSW number nine Jake Gordon will create impact as the finishing scrumhalf, with James O'Connor selected as the replacement playmaker.  Brisbane-born Izaia Perese will play his first Test match on home soil and rounds out the matchday 23.

Saturday night's match will be the 100th Test held in Brisbane, where a win would secure the Wallabies a piece of history as the first team to win the Ella-Mobbs Cup.

Wallabies coach Dave Rennie said: “It's great to have Taniela back this week and he's extremely excited to pull on the gold jersey in his hometown."

"Equally Jordy is looking forward to the opportunity at fullback and of course it will be a proud night for Nick and his family for his Test debut.

"We will proudly be wearing the First Nations jersey and singing the national anthem in Yugambeh language on Saturday night as we pay our respect to Uncle Lloyd McDermott and the First Nations people of this country."