Ireland Make History with Win Over All Blacks

Ireland make history with 32-22 win against All Blacks for first ever series win in New Zealand.

Ireland eyes were well and truly smiling when completing a famous Series victory over the All Blacks in Wellington on Saturday.

It was an outstanding display. They were up 22-3 at halftime and while the All Blacks fought back to 25-22, the Irish had the final say when the home side's desperation over-ruled their execution with mistakes ensuring Ireland would not be denied.

For the All Blacks it was their fourth loss in their last five Test matches and the first time since 1998 they have suffered consecutive losses at home.

Ireland gained a place in history by matching the effort of the 1937 Springboks, the 1949 and 1986 Australians, the 1971 British and Irish Lions and the 1994 French by winning a series in New Zealand.

Matching their efforts was first five-eighths and skipper Johnny Sexton. Apart from leading the side to success, in a personal celebration, achieved 1000 points for Ireland during the game. The playmaker personified pulled all the right strings with goal-kicking to match.

Lock Tadhg Bierne was again influential, not only in the lineouts but in ball-in-hand play around the field, picking off one impressive intercept for effect and gaining turnover balls at the breakdown in the vital last 10 minutes. Hooker Dan Sheehan was outstanding running off mauls, putting in a shallow sidestep to work his way closer to the advantage line.

Another outstanding servant of their game, flanker Peter O'Mahony again contributed massively around the breakdown.

The All Blacks showed more fight, but again they paid the price of a slow start, and mistakes in key plays. They attempted to get back in the game after the break pushing Ireland hard in the middle stages of the second half.

Stringing together 23 phases to open the second half, the All Blacks threw everything at Ireland with flanker Ardie Savea's bullocking running making a big impression and, at his last attempt he scored, again showing class to twist and get the ball down. 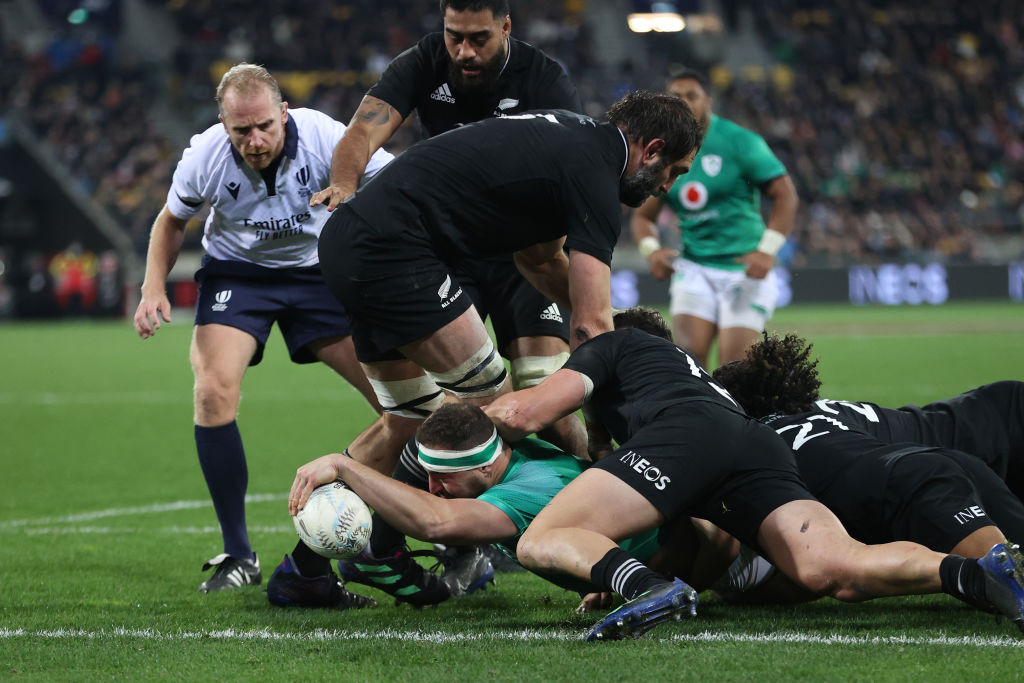 Then in the 51st minute, after Ireland prop Andrew Holden made a head-to-head tackle on lock Brodie Retallick to receive a yellow card.

From the penalty, first five-eighths Beauden Barrett found touch. From the lineout, the ball was moved from the line where blindside flanker Akira Ioane entered the picture, driving through tackles off the ruck, beating fullback Hugo Keenan to score and getting New Zealand back to 17-22.

The All Blacks looked to try to build fluidity with long phases, but when Ireland were given chances they showed equal propensity for playing at punishing speed.

A Sexton probing kick was handled by the All Blacks. Fullback Jordie Barrett secured the ball, before it was released to Savea, who in-passed to wing Will Jordan. He beat No8 Caelan Doris, and then moved into space, opting to take on the cover defence, out-pacing then to score an outstanding solo try.

But after such a productive quarter Savea blotted his copybook by taking a ball from the base of the Irish ruck only to be penalised. Ireland played a lineout move and replacement hooker Rob Herring drove around the maul to score in the tackle, allowing Ireland out to a 10-point lead with 15 minutes to play.

Ireland were inspiring in the face of the All Blacks' determination and there was no way through for the home side. The home side only had to make 60 tackles in the Test but the Irish effort was personified in the 141 tackles they made.

At halftime, there looked little chance of the All Blacks getting back into the game.

Mistakes aplenty occurred for the All Blacks in the first half. Ireland made another great start with flanker Josh van der Flier crossing after a lineout maul five minutes into the game.

By comparison, the All Blacks were unable to get their lineout fluidity with Ireland contesting nearly every throw, picking off two, and seeing a not-straight call for another as the home side attempted a late assault just out from halftime.

However, matched with Ireland's outstanding defence, making 50 to 25 for the All Blacks, and while missing 12, there was still safety in numbers to deny the desperate home side opportunities.

In the 27th minute, another lineout to Ireland created a chance for Lowe and fullback Hugo Keenan to work the ball to and fro between them in two different moves before Lowe slipped a no-look pass inside to Keenan to score.

Beauden Barrett conceded a penalty 45m out and Sexton demonstrated the Irish confidence by landing the goal.

But even when the All Blacks extended the Irish during the best phase of the game, they conceded ball in the 22m and Ireland worked it back downfield to utilise a scrum, even under pressure, to work the ball clear for the ball to be worked right, before it was sent back for Aki to carry play forward and slip a pass for centre Robbie Henshaw to score.

The All Blacks' solitary scoring had been courtesy of a 23rd minute penalty goal to Jordie Barrett.