Ireland claimed a famous win beating the All Blacks 23-12 in Dunedin.

A first Test win over the All Blacks on New Zealand soil, in the second Test in Dunedin on Saturday, has seen Ireland set up a Steinlager Series decider in Wellington next week.

In what was one of the more bizarre Test matches played by either side, especially the first half, the All Blacks were outshone by an Irish pack that showed more of their traditional unity and power, and who, as a team, tackled with the relentlessness Ireland sides are famous for.

Knock-ons, indecision and frustration combined to leave the All Blacks playing catch-up rugby throughout the game.

And in a reversal of the first Test fortunes, it was Ireland who got hands under the ball as both replacement All Blacks hooker Samisoni Taukei'aho and lock Brodie Retallick tried to ground the ball for tries in the final quarter.

Long-serving Ireland first five-eighths Johnny Sexton can retire happy having helped beat the All Blacks at home, and in New Zealand, for the first time. He left the field seven minutes from the end with a leg injury but his partner in arms flanker Peter O'Mahony, who was outstanding, held on until the end.

For the All Blacks there was a belated try, scored by replacement wing Will Jordan, but it did nothing to dull the lustre, or magnitude, of Ireland's win.

They also took advantage of the All Blacks being reduced to 14 men when replacement prop Angus Ta'avao was sent off in the 30th minute after a head clash.

A technical point, in replacing Ta'avao with another prop, denied the All Blacks Ardie Savea for the remainder of the game.

Two yellow cards preceded Ta'avao's departure and did nothing for the composure of the side. There was a glimmer of hope for the All Blacks in the last 10 minutes of the first half, but Irish determination in defence shut down any hopes of an All Blacks recovery.

Ireland made use of their possession advantage early in the second half after Sexton put replacement centre Bundee Aki into space. He linked with the ever-present O'Mahony to set up another run at the line. 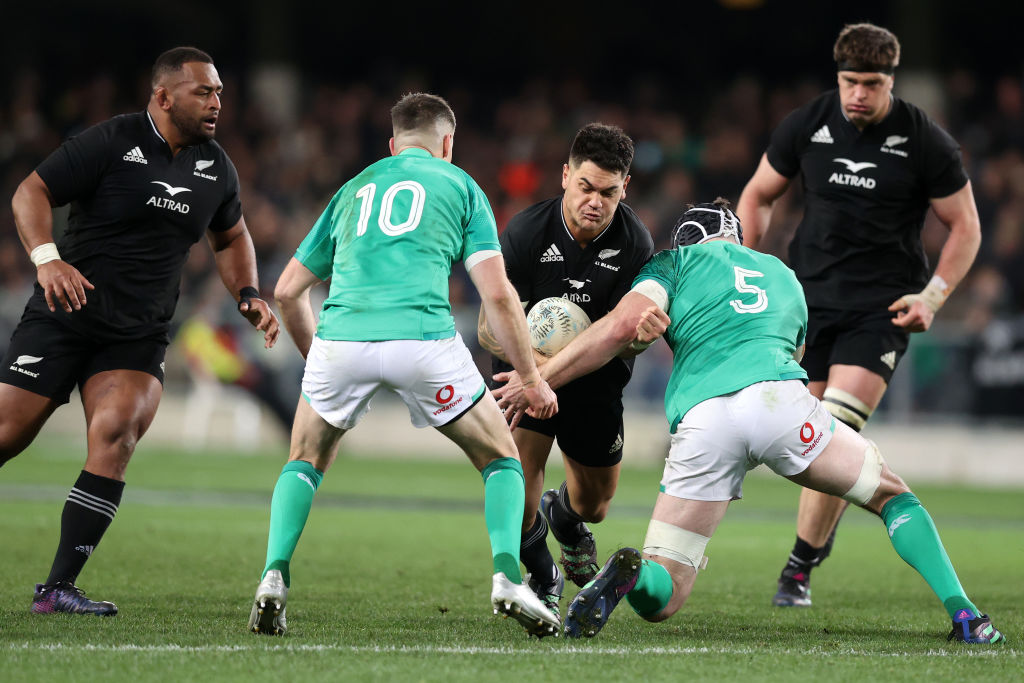 Lock Tadgh Beirne carried play forward and then, after a series of probes, it was prop Andrew Porter who went across for his second try of the night.

A first half like no other in All Blacks rugby history saw Ireland take a 10-7 lead to the halftime break. They should have had more, but missed opportunities saw the home team hold on at near impossible odds to finish the half only three points adrift.

A possible early game-breaking chance went begging for Ireland when they worked a move into the All Blacks goal-mouth only to have wing James Lowe drop the ball.

Ireland scored after two minutes when Beirne raced into a gap in midfield to see his forwards race in with the scent of a try in their nostrils and it was prop Andrew Holden who scored.

Wing Leicester Fainga'anuku and prop Ofa Tuungafasi were sin-binned. Fainga'anuku, in the 16th minute, for an aerial challenge involving head contact and Tuungafasi for an early tackle, that went close to conceding a penalty try in the 24th minute.

But then Ta'avao was sent off for head collision in a tackle on Ireland centre Garry Ringrose, which, when Tuungafasi returned saw No8 Ardie Savea forced out of the game because he had been the player who left the field to allow prop Aiden Ross to prop the scrum.

Ireland lock James Ryan was sin-binned for persistent offending close to the Irish line in the 39th minute.

Fuelled by a succession of penalty infringements, the All Blacks pounded the goal-line, resorting to tap kicks at times to put defensive pressure on Ireland.

Finally, after the halftime hooter had sounded, hooker Codie Taylor picked up to drive at the line. The ball popped out the side of the ruck, and first five-eighths Beauden Barrett raced in, tapped the ball ahead, and through the legs of Tadgh Furlong, to touch the ball down first.