A late Ardie Savea try helped the All Blacks to a hard-fought 32-30 victory over the Springboks in their Rugby Championship Test in Pretoria on Saturday.

In a tightly contested match, the home side made a bright start and dominated the early exchanges but two Handré Pollard penalties were all they had to show for their efforts before the All Blacks struck back with two penalties of their own from Beauden Barrett, which meant the sides were level at 6-6 at half-time.

South Africa upped the ante on attack after the break and eventually held a 30-13 lead by the hour-mark before the world champions' late comeback saw them score 19 unanswered points during the final quarter.

If the truth be told, the All Blacks were far from their best as they were under the cosh for large periods although they did well to fight back and eventually outscored their hosts by four tries to three.

The Springboks were the dominant side early on and took the lead in the fourth minute when Pollard slotted a penalty from 52 metres out after Kieran Read was blown up for offside play on defence.

The All Blacks conceded several further penalties over the next 10 minutes and the Springboks were soon camped inside their opponents' 22.

In the 13th minute, Damian de Allende was held up while crossing the All Blacks' try-line but, once again, the world champions strayed offside on defence and Pollard doubled his team's lead when he added the resulting penalty.

South Africa continued to dominate and had the bulk of the possession and territory during the next 10 minutes and kept the All Blacks pinned inside their half thanks to accurate kicking out of hand from Pollard and Faf de Klerk.

New Zealand soaked up that early pressure and opened their account in the 26th minute courtesy of a penalty from Barrett after Eben Etzebeth infringed at a lineout 10 metres inside South Africa's half.

And 10 minutes later, Barrett drew his side level when he added another three-pointer of the kicking tee after illegal play from Francois Louw at a ruck.

Just like the opening half, the Springboks were fastest out of the blocks after the break and four minutes after the restart Steven Kitshoff got a pass out to Jesse Kriel, just outside the All Blacks' 22, and he did well to shrug off tackles from Waisake Naholo and Ryan Crotty before outsprinting the cover defence to score the opening try.

Five minutes later, South Africa went further ahead when Siya Kolisi made a brilliant line break before offloading to De Allende, who dotted down under the posts.

Once again, Pollard was successful off the kicking tee but the All Blacks responded shortly afterwards courtesy of an Aaron Smith try after Codie Taylor tore the home side's defence to shreds with a superb run in the build-up.

Despite that setback, the Boks did not panic and in the 59th minute Cheslin Kolbe ran onto a pass from Willie le Roux and dotted down in the right-hand corner but only after confirmation from the television match official after desperate tackles from fly-half Barrett and Rieko Ioane on defence.

Pollard retained his perfect goal-kicking record by slotting the conversion which meant the Boks had their tails up with the score 30-13 in their favour.

But despite that huge margin, the All Blacks showed why they are the world champions as they came back strongly during the game's closing stages.

Two minutes after Kolbe's try, the All Blacks created space for Ioane on the wing and he cantered in for an easy five-pointer after an inch-perfect long pass from pivot Barrett.

The All Blacks finished stronger and they spent most of the final 10 minutes inside South Africa's half. And after an extended period camped deep inside the Boks' 22, Scott Barrett barged over the whitewash from close range in the 75th minute with Richie Mo'unga's conversion making it a three-point game.

Just before full-time, the All Blacks were hammering away at the Boks' try-line before Savea showed his class to dot down under a mass of bodies and, once again, Mo'unga added the extras with the last act of the game to clinch the win for New Zealand. 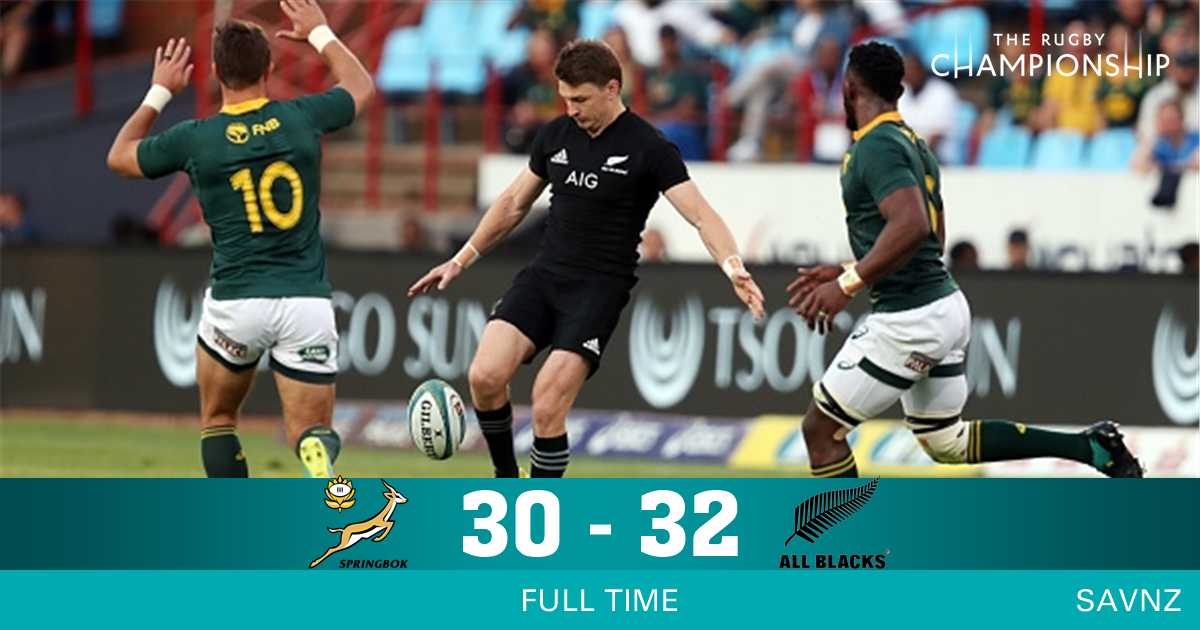