Late All Blacks Rally Too Much For Scotlsand

It took the introduction of the All Blacks' bench to shake off the Scottish challenge in Edinburgh.

Scotland, for 54 minutes through the middle stages at Murrayfield, sniffed their long-awaited first win over New Zealand, but a fourth quarter All Blacks recovery saw debut wing Mark Telea score the match-winning try for a 31–23 win.

Undeterred by the All Blacks two-try blitz in the first five minutes, Scotland stormed to a 17-14 lead at halftime and while nudging ahead through penalty goals in the second half, they could score no more tries.

After a Jordie Barrett penalty goal reduced the margin to six points after 62 minutes, and the momentum burst from the All Blacks' bench, they took control of the game and came home stronger.

A barrage of quick possession and movement carried them to the Scottish line where replacement Jack Dempsey was sin-binned for a deliberate knock down of the ball.

New Zealand had the scrum from five metres out. No.8 Ardie Savea, who was again powerful, made the first burst at the line but it was lock Scott Barrett who scored with 15 minutes left.

Mistakes from the All Blacks compounded, and with penalties mounting, Scotland were able to nudge their way ahead through the trusty boot of first five-eighths Finn Russell.

The penalties eventually evened up at 13 apiece and the All Blacks' had reward for their efforts to move the ball, making 487m to 385 for Scotland and forcing them to make 151 tackles to 112 of their own.

By the end, the solidity of the introduced players, headed by halfback TJ Perenara, who made his 57th appearance off the bench – an All Blacks record, allowed them to secure the faster ball they needed to stretch Scotland out wide. Centre Rieko Ioane gave Telea the pass for the vital last try while hooker Codie Taylor was powerful on the break.

Props George Bower and Fletcher Newell had an immediate impact at the scrum where the penalties started to flow New Zealand's way while flanker Shannon Frizell was dominant with ball in hand.

Savea and Dalton Papali'i managed 13 turnovers to Scotland's eight and were still having an impact in the 80th minute.

Telea had a dream start to his Test career. His first touch came after having to turn back to gather a kick-pass, but he still managed to beat his challenger and take play to the Scottish 22m where a penalty resulted. After the kick to the corner hooker Samisoni Taukei'aho scored after two minutes 20 seconds.

Scotland roared onto attack from the restart but Papali'i secured ball at the breakdown. Clearing their 22m they set up left-wing wing Caleb Clarke for a powerful charge from a kick through down the flank. And another cross-kick to the goal-line where Telea had a try at his second touch.

But after 15 minutes Scotland roared back into the game after a break into the line from fullback Stu Hogg, who chipped ahead to the in-goal was impeded by centre Anton Lienert-Brown in the chase for the ball. After a TMO check, referee Frank Murphy ruled a penalty try and time in the sin-bin for Lienert-Brown.

Papali'i secured another turnover but in attempting to space on the left, second five-eighths David Havili attempted to run first five-eighths Beauden Barrett into the open but his pace was straight to wing Darcy Graham who beat Clarke and Jordie Barrett before scoring to level the scores after 13 minutes.

Scotland maintained their momentum, aided by a string of All Blacks infringements, with Russell kicking a penalty goal after 30 minutes.

The half finished with Scotland throwing everything at the All Blacks line until another turnover, this time by No8 Ardie Savea resulted in a penalty for the kick to touch and halftime.

More All Blacks gained big game exposure in the northern hemisphere, but their greatest lesson was in the response from the experience injected into the game from the bench. 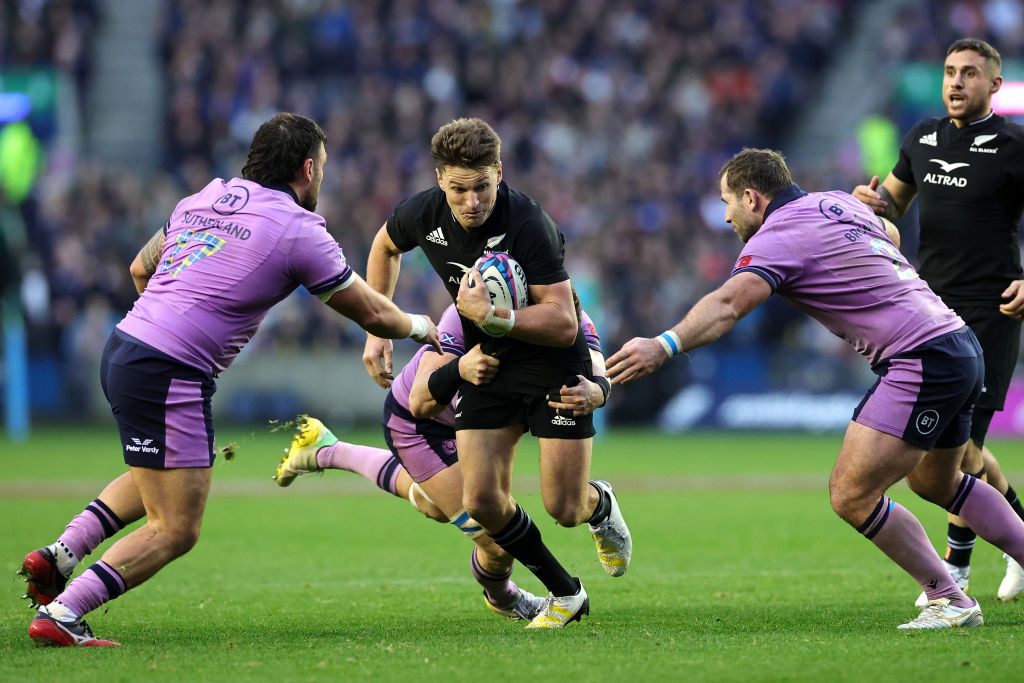