Springbok Aphiwe Dyantyi and All Black Rieko Ioane are two of the world's best young wingers and go head-to-head in Pretoria.

In the titanic struggle at Westpac Stadium last month, the tight margin of the final score was reflected in the battle of the left-edge speedsters for each team. South Africa’s Aphiwe Dyantyi scored two tries and made three clean breaks; his opposing No.11 Rieko Ioane scored two tries for New Zealand and made five clean breaks. In the end, it was Dyantyi who had the last laugh, as the Springboks held on to record a historic 34-36 win on New Zealand soil: now Ioane and his All Blacks teammates will look to return the favour when they travel to Pretoria, with each side’s classy left-winger set to light up the field.

Having made his international debut less than four months ago, Dyantyi has taken little time in finding his feet on the world stage. A tidy start to his career in the June Internationals has been followed by a spectacular showing in The Rugby Championship, to the point where he is now sitting equal-first on the tournament’s try-scorers list alongside Beauden Barrett with five in the bag. 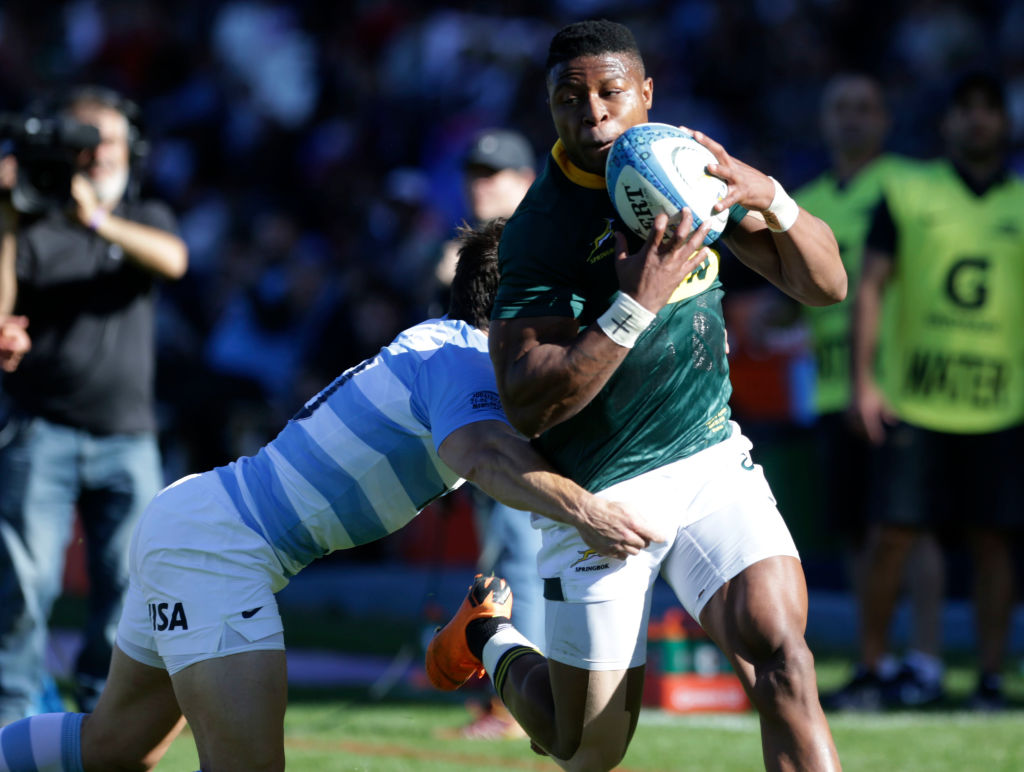 Dyantyi had the unenviable task of lining up opposite one of Australia’s most dynamic outside backs in Israel Folau last week, but more than held his own against the Waratahs fullback. After bagging a try in the opening minute, Dyantyi outclassed his opponent, making more tackles and gaining more metres. His defence this tournament has been impressive for a player with just a few games under his belt – he one of only three wingers or fullbacks with 20+ tackles and over 200 metres gained to his name (alongside Waisake Naholo and Bautista Delguy). 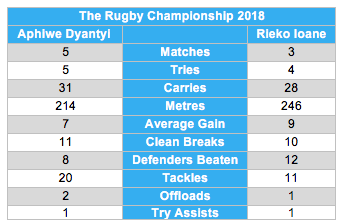 After he missed a few games at the start of the tournament, Rieko Ioane has exploded into some spectacular form on the left edge. He has bagged a brace in each of his last two games, gaining over 200 metres combined across those matches. The 21-year-old has stamped himself as one of the most exciting young prospects in world rugby with an insatiable hunger for tries – he has scored 20 tries in 19 matches for the All Blacks, including four in three games against the Springboks. He sits atop the try-scorers list for 2018, with nine tries in just six games.

The fact that Ioane and Dyantyi are likely to line-up on opposite sides of the field means we are unlikely to see a clash of these young titans in the physical sense, but each winger will want to be the spark their side can rely on to provide a scintillating carry or run-away try. The Rugby World Cup kicks off in less than a year, and both Ioane and Dyantyi will want to stamp their authority as the world’s premier winger in the lead-up to the competition.