At the conclusion of the 2015 World Cup, the names Bernard Foley and Handre Pollard were fresh in everyone’s minds. Off the back of some superb creative rugby crafted by Foley, the Wallabies had stormed into a final that many pundits tipped they wouldn’t make before the tournament began. For the South Africans, a 21-year-old called Handre Pollard kicked five goals from five attempts against New Zealand, out-performing the legendary Dan Carter with the boot in a thrilling semi-final. Pollard (93) and Foley (82) finished second and third respectively for highest point scorers at this tournament; now the pair are hoping to rediscover this form when they face-off this Saturday.

In the June International series against England, Pollard led the Springboks to an unassailable 2-0 lead before being named as a substitute for the final game. He kicked 28 points in the two games he started but has struggled with the boot in The Rugby Championship. Pollard has kicked just four goals from 11 attempts. While he has been solid defensively, he went missing in attack as he failed to set up any tries against Argentina. Some have even called for him to vacate the No. 10 jersey against the Wallabies. 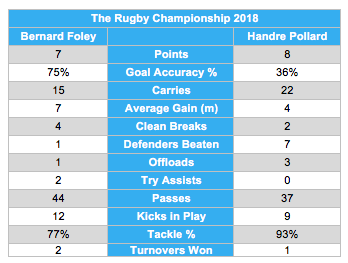 Two straight losses against Ireland followed by back-to-back defeats against New Zealand has put Australia, and their playmaker, Foley, up against it. He has been solid with the boot but struggled to find that same creativity from the 2015 World Cup, with the Wallabies scoring 20+ points just once this year. Two try assists against the All Blacks is certainly commendable, but Foley will need to step up in attack to lift Australia off the bottom of The Rugby Championship ladder.

Defensively, Foley has been out-performed by Pollard, and the South African playmaker will no doubt be sending traffic towards Foley in defence. The Waratahs fly-half has been tidy with his goal-kicking and sits equal-second in his team for clean breaks behind only Marika Koroibete (5).  The running game of Foley and halves partner Will Genia is slightly ahead of their South African counterparts this series, especially when considering the Wallabies were up against the feared All Blacks pack. Pollard and Foley have faced each other just once before, Pollard coming up trumps in Cape Town, 2014 with a 28-10 win, and this encounter is sure to be a perfect test to see which fly-half is closer to rediscovering some 2015 World Cup-form and get their side on track in the chase for the Web Ellis trophy in Japan next year.