Wallabies search for first win on tour as coach Dave Rennie shuffles his team for the match against Wales in Cardiff.

Tighthead props Taniela Tupou and Allan Alaalatoa have both made full recoveries to be named to take their place for the Wallabies final Test of 2021 against Wales.

Tupou is set to start alongside hooker Tolu Latu who made his return to the Test arena last weekend while James Slipper will captain the side for just the second time in the absence of the injured Michael Hooper.

The side will wear their First Nations jersey on Saturday evening, the second time it's featured in a Spring Tour Test and the first against Wales.

Hooper will be replaced by Pete Samu at openside flanker with the dynamic backrower joined by blindside flanker Rob Leota and no.8 Rob Valetini as the starting loose forwards. Valetini is one of just three players to be picked in every Test this year, alongside Slipper and outside centre Len Ikitau.

Reds winger Filipo Daugunu is the final change to the starting XV, earning his first Wallabies jersey since breaking his arm in the series decider against France back in July.

Rory Arnold and Izack Rodda will continue to refine their lock partnership, named to start their third consecutive Test.

After a perfect night from the boot at Twickenham, James O’Connor will again steer the ship from flyhalf with Nic White again the starting scrumhalf, after a strong performance in last week's match against England.

The youthful midfield of Hunter Paisami and Ikitau have been named to start, with the pair having started all four of the Wallabies Tests Spring Tour Tests in what is the first overseas tour of their international careers.

Daugunu is joined by World Rugby Breakthrough Player of the Year nominee, Andrew Kellaway on the wing for the Test at Principality Stadium, with Kurtley Beale to wear the 15 jersey at fullback.

Brumbies hooker Folau Fainga’a will move to the pine to accommodate Latu’s first start since 2019, with Alaalatoa and Angus Bell the reserve props.

Will Skelton has been named as the replacement lock for the third straight week, with Lachlan Swinton recalled as the backrow cover. 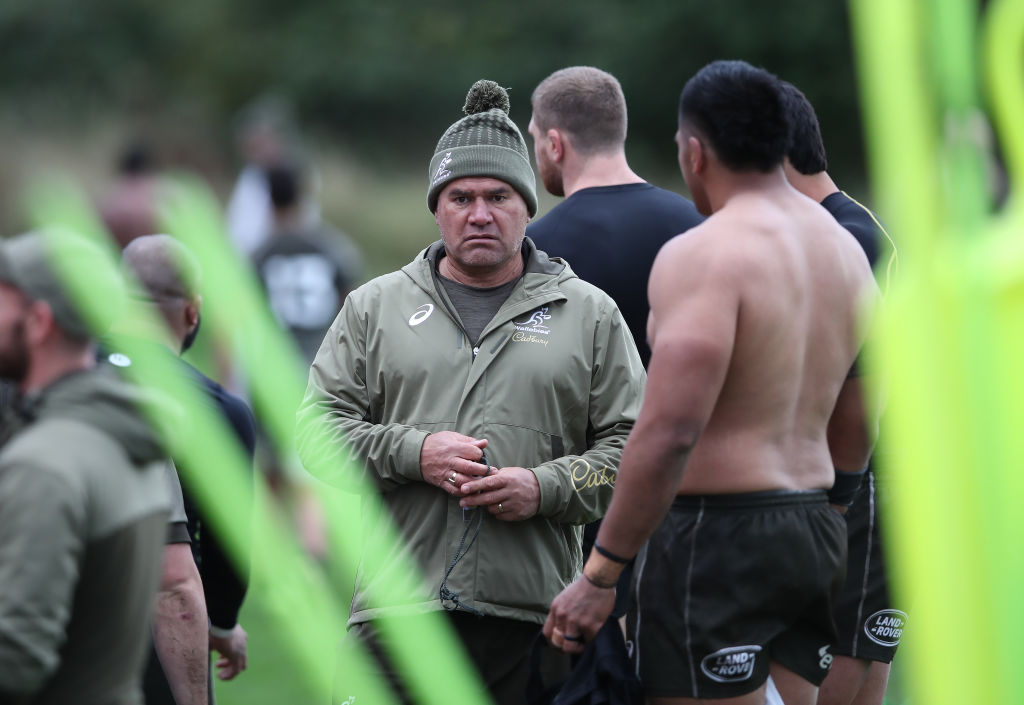 Queensland Reds livewire Tate McDermott is the finishing scrumhalf with Waratahs inside back Lalakai Foketi earning his first Test call-up, and is in line to become the 950th Wallaby on Saturday. Fleet-footed Tom Wright rounds out the matchday 23.

Wallabies coach Dave Rennie [pictured above] said: “It’s great to have Taniela and Allan back in the mix this week, they bring a level of experience that will be key for us against a tough Welsh team.”

“Slips is hugely respected in our mob and a strong contributor to our leadership group.  He was the obvious choice to lead us in the absence of Hoops.

“Lalakai has been with the squad all year and worked extremely hard to earn his first International opportunity in what’s a proud moment for him and his family.

“We’ve made some great shifts this year, but we’ve been disappointed with our performances in the last two Tests and we’ll be looking to ensure we finish the year on a positive note against Wales on Saturday night.”

The Wallabies Spring Tour Tests will be ad-free, live and on-demand with extended coverage on Stan Sport.