All Blacks smash several points scoring records as they beat Italy 47-9 in Rome.
Under normal circumstances, against superior opposition, a 47-9 win by the All Blacks would have been satisfactory but against Italy in Rome on Sunday (NZT) frustration meant it wasn't the performance they would have wanted.

It took a two-try scoring effort from lineout chances close to the line by hooker Dane Coles to finally halt the All Blacks' scoring inertia. It was no surprise that he commented when awarded the man of the match award that the score didn't reflect how hard the game was.

It was a game that will go down as providing plenty of lessons for the younger All Blacks to absorb as they look to their futures.

If pushing a case for the remaining Test matches of the tour halfback Finlay Christie did himself no harm with an outstanding display after coming on when Brad Weber suffered a head knock that could limit his opportunities for the final two games.

Lock Josh Lord also impressed, maintaining a high standard throughout, not only in securing possession but showing strong defensive skill in open play, appearing on the wing at one stage to snuff out an Italian chance.

It was Christie who scored the All Blacks' first try 27 minutes into the game. It was welcome relief after Italy, by virtue of determined close-quarter tackling, feasted on the All Blacks' inexperience.

Denied an early try from referee Karl Dickson's decision not to allow an advantage to home wing Monty Ioane, Italy held their line until the 27th minute when the power of the All Blacks' scrum came into play.

Just out from Italy's line, the home pack was pushed off the ball and as the ball popped out the side replacement Christie picked up the ball and stretched out to score. 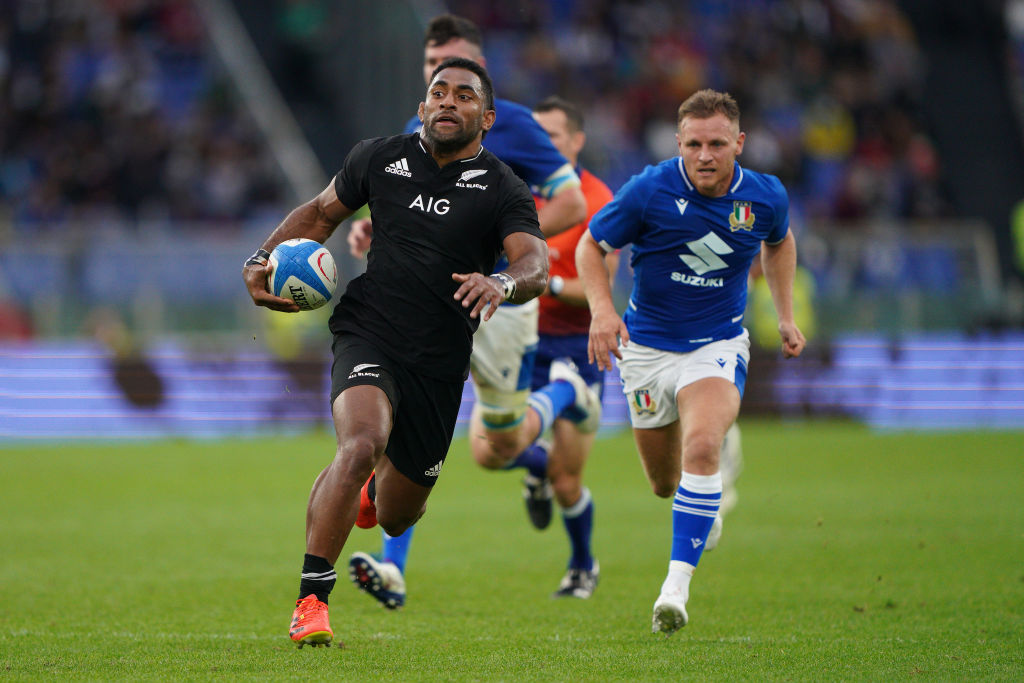 Sevu Reece scored one of the All Blacks seven tries

Christie then secured a high ball and set play back downfield. The Italians were penalised for first five-eighths Richie Mo'unga to find the touch and from the lineout, the resulting maul produced Coles' first try.

Two minutes from halftime, he was in again, launching himself off the back of a lineout maul and scoring from 10m out. It was his 20th try, putting him third behind Richie McCaw and Kieran Read as top try-scoring All Blacks forwards.

For their efforts Italy only gained six points from penalty goals through first five-eighths Paolo Garbisi. He added another before being forced from the field with an injury.

Then, as the experience started to appear from the bench, prop Ofa Tuungafasi charged through a ruck, fed Christie, who raced into space and had wing Sevu Reece in support. The wing had too much speed to touch down.

Asafo Aumua struck another blow for the try-scoring hookers brigade when crossing from a fast-moving maul in the 68th minute before adding a second in the 75th minute.

If footwork wasn't able to provide routes through the home defences, the variation in passing speed orchestrated by Mo'unga created a 70th minute try when a weighted pass to wing George Bridge provided space on the flank for No8 Hoskins Sotutu to put his speed to use to run in a try

Italy wing Ioane had an outstanding game, several times working his way around New Zealand's defence but the try he was denied was the closest Italy looked like scoring. For all their defence, which was severe, they lacked finesse with the ball in hand.

The All Blacks also broke three world-records in the process of their victory. The seven tries scored in Rome took the side to 96 tries scored so far in 2021, the most ever recorded since Argentina scored 92 tries in 2003. They also moved to the top of the all-time point scoring ladder with 675 points in 2021. The previous leader was South Africa who scored 658 points in 2007. Richie Mo'unga's six conversions also took the All Blacks to 66 successful conversions in 2021, four more than what South Africa acheived in 2007.