The Southern Hemisphere is well represented in this year's nominations with several players and coaches from the SANZAAR family nominated.

The rugby family can now cast their vote for six of the prestigious World Rugby Awards 2021 categories after the nominations selected by the star-studded panel were revealed on Monday.

The remaining six categories will be voted by the World Rugby Awards panel, a stellar team of rugby legends who will have the hard task of selecting winners for the World Rugby Breakthrough, Coach and Referee awards as well as the newly created Men’s and Women’s 15s Dream Teams of 2021.

To maintain the integrity of the outcome, the panel will have the opportunity to review the public voting to ensure the recipients are fitting winners in their respective category.

Nine countries are represented among the nominees in Argentina, Australia, England, Fiji, France, Italy, New Zealand, South Africa and Wales, with France having the most representatives with eight, two more than England and New Zealand. Fiji are also rewarded for their teams’ performances at the Tokyo 2020 Olympic Games with four nominees in the Men’s and Women’s Sevens Player of the Year categories.

Australia captain Michael Hooper – who became his country’s most-capped captain in September – and England’s Maro Itoje have both previously been nominated for the Award, but lively scrum-half Antoine Dupont becomes the first Frenchman to be nominated since 2012 while Samu Kerevi is rewarded for his impactful return to the Wallabies midfield in 2021 which saw them win five tests, their best run outside of a Rugby World Cup year since 2008.

Four first-time nominees in this category representing the two teams that have led the way in women’s rugby in 2021. Poppy Cleall and Zoe Aldcroft are two powerhouses of the England pack, both comfortable in either the second row and back row, while Caroline Boujard scored what is believed to be the joint-fastest hat-trick in Women’s Six Nations history against Wales in April. Laure Sansus’ selection, meanwhile, make it three years in a row that a French scrum-half has been nominated for the prestigious award.

Three flying wingers and an exciting talent at fly-half who have all lit up the international stage over the last year. Will Jordan is the second-fastest All Black to 15 test tries and has only failed to score in two of his 12 tests, while Andrew Kellaway is closing in on the Australian record for most tries in a debut season with eight in 12 tests in 2021. Louis Rees-Zammit became the youngest British and Irish Lion player for more than 50 years after impressing for Wales, while Marcus Smith has looked like a veteran in the England No.10 jersey since his debut in July. 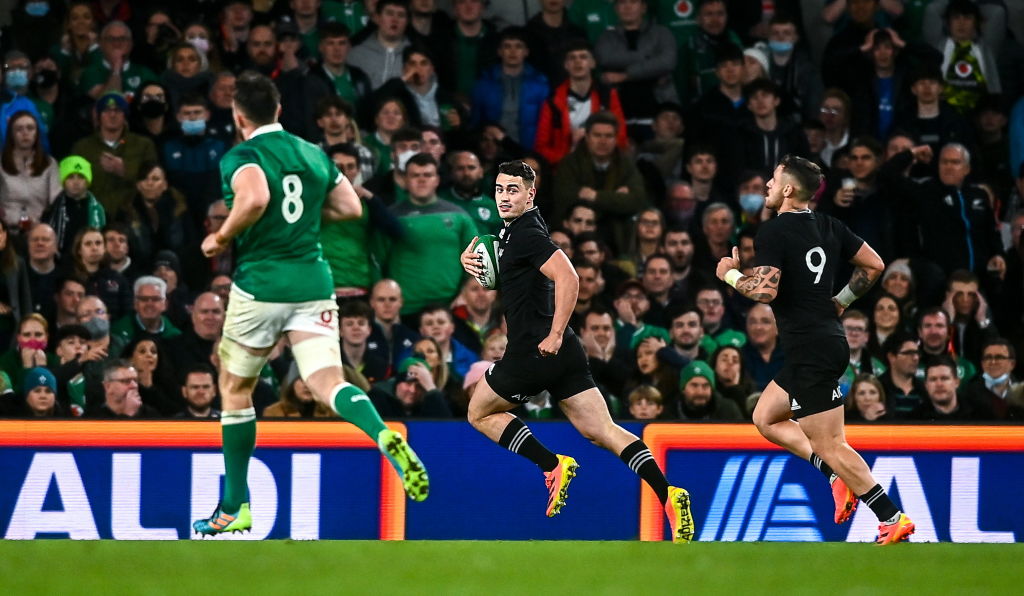 All first-time nominees split across sevens and 15s, Allan Bunting and Cory Sweeney led New Zealand to Olympic gold in Tokyo, the one remaining accolade they were missing, while Simon Middleton led England to another Women’s Six Nations title and back-to-back record victories over world champions New Zealand in 2021. Ian Foster coached New Zealand to Rugby Championship and Bledisloe Cup success in a record-breaking year, while Dave Rennie has injected youth and experience into a Wallabies side that won five matches in a row, two of them against world champions South Africa.

The nominees blend the guile and experience of New Zealand’s co-captain and talisman Scott Curry to the fresh exuberance of youth of Argentina’s Marcos Moneta, the top try-scorer with six in Tokyo. Fiji continue their proud record of having at least one player among the nominees from 2013 onwards with two gold medallists in Napolioni Bolaca and Jiuta Wainiqolo, the latter marking his Fiji debut in a global sevens tournament with the opening try of Tokyo 2020 to quickly announce himself to the world.

New Zealand’s inspirational captain Sarah Hirini led the Black Ferns Sevens to the Olympic gold that had driven them on for the last five years, while Anne-Cécile Ciofani was a standout for France on the way to silver. Two players who helped inspire Fiji become their nation’s first female Olympic medallists are also nominated in Alowesi Nakoci and Reapi Ulunisau, the latter belying the fact it was her debut in a global tournament by finishing as top try-scorer with eight, including a record four against Brazil in the pool stage.

Three tries that began deep in their own 22 from a free-kick or scrum and were quickly turned into tries after free-flowing attacks and the fourth a run back from a clearing kick to halfway. Damian Penaud’s try against Scotland in the Six Nations saw the winger gather his own chip dot down, while France team-mate Pierre-Louis Barassi finished off a move that had begun five metres from their own line against Australia in July. Cheslin Kolbe’s dancing feet and offload released Lukhanyo Am to score for South Africa A against the British and Irish Lions, while an outrageous offload from Beauden Barrett was gratefully received by Luke Jacobson to finish another flowing move from the All Blacks in The Rugby Championship against Argentina.

Two French tries in the Women’s Six Nations, one to round out an impressive debut from Emilie Boulard late on against Wales when she finished off a slick passing move in the corner and the other another run-in from back-row Romane Ménager against Ireland. England swung the ball wide quickly from a lineout to find Abby Dow, the winger running around the outside of the defender to race in against hosts France a week after their Six Nations final triumph. The final nominee comes from the RWC 2021 Europe Qualifier, hosts Italy stealing an overthrown Scottish lineout near halfway to quickly send Sara Barattin over near the posts.

After a special edition in 2020 due to the COVID-19 pandemic, the prestigious World Rugby Awards return in 2021 to celebrate on-field achievements of the calendar year and recognise the teams and individuals who have inspired players and fans around the world. The pandemic has continued to impact the international stage with a number of teams having only returned to test rugby in the last couple of months.

Placed at the end of the November international window, the biggest accolades in rugby union will be virtually handed to their recipients from 6-10 December. The 12 categories will be unveiled on World Rugby social media channels including Instagram, Twitter, Facebook and YouTube (@WorldRugby).

The other categories to be awarded next month are the World Rugby Referee Award, the Vernon Pugh Award for Distinguished Service and the World Rugby Men’s and Women's 15s Dream Teams of the Year in association with Capgemini.

World Rugby Chairman Sir Bill Beaumont said: “The World Rugby Awards are the ultimate accolade for rugby, and we are delighted to honour the outstanding players and individuals who have made an impact on our game on and off the field in 2021.

“The pandemic and its consequences have restricted several unions from playing international games this year and we recognise that not all rugby stars have had a chance to shine. Nevertheless, the World Rugby Awards Panel has done an amazing job in selecting suitable candidates in each category and I would like to congratulate all nominees who, deservingly, have been shortlisted for this year’s awards.”