World Rugby has unveiled the shortlists for the prestigious World Rugby Awards 2022, which will be presented in Monaco on Sunday, 20 November.

Following a stellar year for international rugby culminating in a record-breaking Rugby World Cup 2021 in New Zealand, nominees for the sport’s ultimate accolade feature players, coaches and unsung heroes who have made their mark on 2022 both on and off the field.

Fans can cast their vote on social media and select their winners for the two International Rugby Players Men’s and Women’s Try of the Year categories until Thursday, 17 November at 23:59 GMT.

Twelve countries are represented among the nominees in Australia, Canada, Chile, England, Fiji, France, Italy, New Zealand, Scotland, South Africa and Wales, with Ireland having the most representatives with eight. Australia are also rewarded for their performances on the HSBC World Rugby Sevens Series and at Rugby World Cup Sevens this year with five nominees in the Men’s and Women’s Sevens Player of the Year categories.

Returning to a physical format for the first time since the pandemic, the 22nd World Rugby Awards will be handed to their recipients on 20 November from 19:30 CET. Stars and legends from 15s and Sevens will gather in the iconic Salle des Étoiles for a magnificent ceremony under the High Patronage of HSH Princess Charlene of Monaco. The global rugby family can follow the red carpet and evening of celebration on World Rugby social platforms (@WorldRugby).

World Rugby Chairman Sir Bill Beaumont said: “The World Rugby Awards are the ultimate accolades for rugby, and we are delighted to honour the outstanding players and individuals who have made an impact on our game on and off the field in 2022.

“On behalf of World Rugby, I would like to congratulate all nominees of this 22nd edition for their incredible achievements over the past calendar year. Not only have they showcased tremendous rugby skills, but they have also inspired millions of fans around the world helping spread the values of our sport.

“I am looking forward to host the global rugby family next Sunday under the high patronage of HSH Princess Charlene of Monaco and the Principality for a night of celebration in Monte-Carlo.”

Previous winners Antoine Dupont and Johnny Sexton are in the running to be named Player of the Year for a second time. Dupont, who won the most recent award in 2021, helped France to a men’s Six Nations Grand Slam, scoring tries against Ireland and England. Sexton, named Player of the Year in 2018, and first-time nominee Josh van der Flier were part of the Ireland team that claimed an historic series win against the All Blacks in New Zealand. Lukhanyo Am [pictured below]  is also nominated for the first time, having helped the Springboks to a series win against Wales earlier this year. 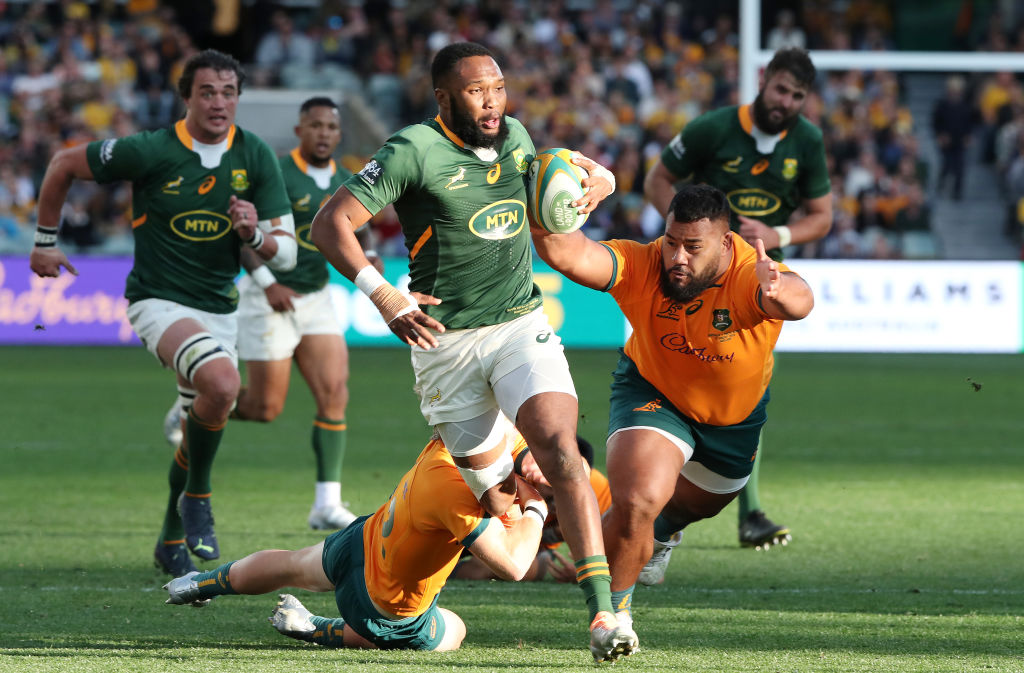 Rugby World Cup 2021 winners Portia Woodman and Ruahei Demant are among the nominees for this prestigious award. Woodman, who scored seven tries in New Zealand to take her tournament tally to a record 20, could win the award for a second time, while first-time nominee Demant was named Player of the Match in their final victory against England. Canada skipper Sophie de Goede, who had a huge impact in New Zealand, and England flanker Alex Matthews, who started every match for England during both the Women’s Six Nations and RWC 2021, are also in contention. Laure Sansus is nominated for the second successive year, meaning a French scrum-half has been on the shortlist for the last four Women’s Player of the Year awards.

Already a star in sevens, Ruby Tui took 15s by storm in 2022, scoring eight tries in nine tests ahead of the RWC 2021 final. Black Ferns team-mate Maiakawanakaulani Roos, meanwhile, cemented her place in the New Zealand second-row with a string of commanding performances. Roos is the youngest player on the list, born 15 days after England prop Maud Muir, who featured in all 13 of the Red Roses’ matches in 2022. Vitalina Naikore was one of the standout players for Fijiana in both their victorious Oceania Rugby Women’s Championship campaign and debut appearance at Rugby World Cup.

Three back-three players who have set pulses racing over the past year and an exciting hooker make up the nominees. Having broken into the Ireland team during the men’s Six Nations, Dan Sheehan and Mack Hansen each played an integral role in the series win against New Zealand in July. Italy full-back Ange Capuozzo scored twice on his debut and then set up the match-winning try as the Azzurri secured a first win against Wales in 15 years. Henry Arundell made an instant impact on test rugby, scoring a try within six minutes of coming on to win his first England cap, against Australia in July.

World Rugby Coach of the Year

This year’s nominees are an equal split between coaches working in the men’s and women’s games. Wayne Smith led the Black Ferns to a sixth Rugby World Cup triumph, and first on home soil, beating England in the final. Under Simon Middleton’s guidance, the Red Roses had put together a world-record 30-match winning run until that defeat, completing a fourth successive Women’s Six Nations clean sweep along the way. In the men’s game, Andy Farrell masterminded a first Irish series win in New Zealand, as well as the team’s rise to the top of the rankings. Fabien Galthié, meanwhile, oversaw a Six Nations Grand Slam with France and has guided Les Bleues on a country-record unbeaten run.

Three team tries and two impressive solo efforts make the list. Sylvia Brunt was on hand to supply the finishing touch for New Zealand against Wales, following a flowing move that was supercharged by a Ruahei Demant break. Australia were eliminated from RWC 2021 at the quarter-final stage but scored one of the tries of the tournament against England as Emily Chancellor slid in after some slick hands in difficult conditions. Another fine team move from Ireland against Wales in the Women’s Six Nations ended with a superb offload from Sam Monaghan to the onrushing Linda Djougang, while South Africa’s Nomawethu Mabenge combined strength, agility and pace to run in from halfway against Spain. England’s Abby Dow showed impressive pace to finish a fine length of the pitch effort at a crucial moment in their Rugby World Cup 2021 semi-final against Canada.

Four counter-attacking tries that started deep inside the attacking team’s own half and one example of pure pace. Chile fly-half Rodrigo Fernandez picked up the ball just outside his 22 and then slalomed past six USA defenders before reaching the line, a feat made all the more implausible by the incredibly wet conditions. Chris Harris finished off a fine team counter-attack for Scotland against Italy, while Edoardo Padovani touched down for the Azzurri against Wales following a scintillating break from Ange Capuozzo. Louis Rees-Zammit, meanwhile, used his acceleration to leave the South African defence trailing in his wake. Lalakai Foketi [pictured below] finished off a masterful Australian try against France with an effort that began in their own 22, forwards and backs combined to show pace and skill to score a 90 metre wonder try. 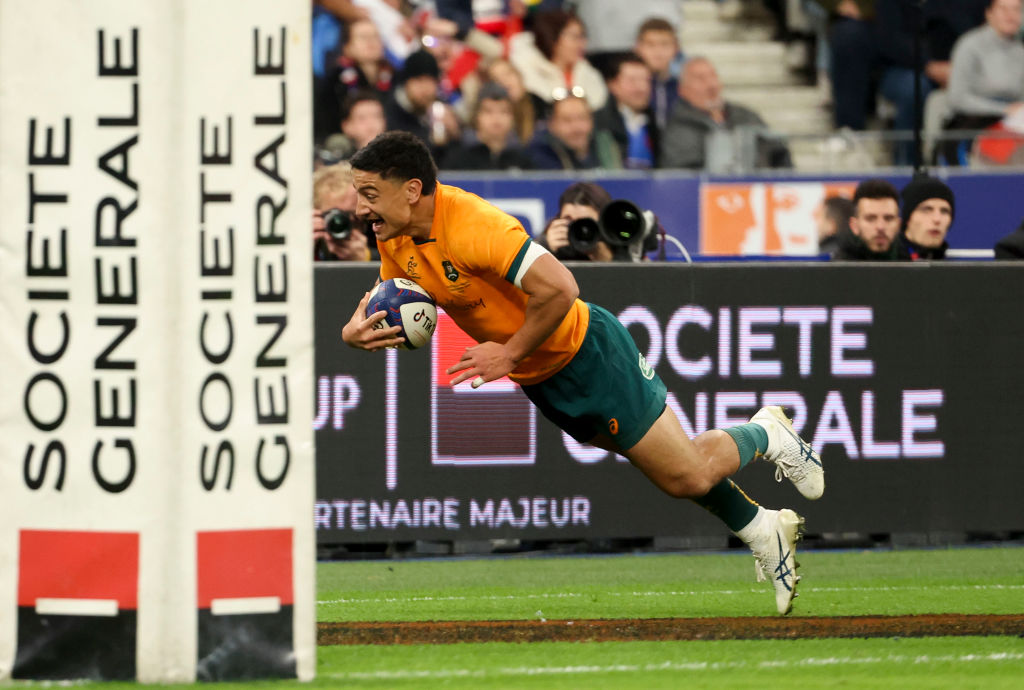 Australia co-captain Charlotte Caslick is one of three players nominated from the reigning Series, Commonwealth Games and RWC Sevens champions. Caslick finished the 2022 Series top of the DHL Impact Player Table and played every match in England and South Africa as her side won gold. Maddison Levi, who scored a hat-trick in the RWC Sevens 2022 final, and Faith Nathan, who became the first player to score five tries in a single match at the tournament, are also nominated. Ireland winger Amee-Leigh Murphy Crowe is also in contention having topped the 2022 Series try-scoring charts with 36.

Two members of the Series-winning Australia squad have been nominated for this prestigious award. Nick Malouf captained the side throughout their triumphant campaign, while Corey Toole scored 43 tries as the Australians won the title for the first time. Ireland’s Terry Kennedy was the only player to score more tries (50) than Toole during the 2022 Series and he signed off from a remarkable sevens career by helping his country to victory in the Rugby World Cup Sevens 2022 bronze final. Kaminieli Rasaku built on a fine debut year on the Series by helping Fiji to a third RWC Sevens title, scoring four tries in as many matches in Cape Town.