Red cards aplenty as Wallabies stun All Blacks in Brisbane

Australia showed great character to bounce back from last weak's heavy defeat against New Zealand and claim a 24-22 triumph over their trans-Tasman rivals in Saturday’s Tri-Nations Test in Brisbane.

Although an entertaining encounter, the match was marred by ill-discipline, with both sides finishing with 14 men after Ofa Tu'ungafasi and Lachie Swinton were red-carded in the opening half.

Tu'ungafasi was sent off in the 23rd minute after making direct contact to the chin of Tom Wright when tackling the Wallabies wing, and Swinton received his red card for a similar offence on Sam Whitelock five minutes before half-time.

After suffering a record defeat to the All Blacks last weekend, the Wallabies were under pressure but they delivered a much better performance in this fixture and were competitive throughout.

Reece Hodge, who made only his second Test appearance at flyhalf for Australia, finished with a 14-point haul after slotting four penalties and a conversion. Their other points came via tries from Wright and Taniela Tupou.

For the All Blacks, Rieko Ioane, Codie Taylor and Tupou Vaa'i scored tries while Jordie Barrett succeeded with two conversions and a penalty.

The Wallabies were fastest out of the blocks and took the lead as early as the third minute courtesy of a try from Test debutant Wright. Hodge delivered a teasing chip kick deep inside New Zealand's half and Tom Banks did well to gather the ball before offloading to Wright, who dotted down.

It didn't take long for the All Blacks to respond. Five minutes later, a Ngani Laumape pass inside Australia's 22 was knocked backwards by Wright but Ioane was quickest to react and gathered the loose ball before crossing for his 26th try in his 32nd Test.

Midway through the half, Australia regained the lead when Hodge slotted a penalty after Sevu Reece infringed at a breakdown. Shortly afterwards, New Zealand suffered that setback when Tu'ungafasi was sent off for his illegal hit on Wright. With a numerical advantage, the Wallabies had the bulk of the possession and territory but despite that, it was the All Blacks who scored next via a 33rd-minute penalty from Barrett.

From the restart, Wallabies debutant Swinton committed his indiscretion and referee Nic Berry had little hesitation in giving him his marching orders after checking television replays. Swinton's exit saw New Zealand regaining the initiative and they spent the closing stages of the half on the attack inside their opponents' 22.

Just before the interval, the Wallabies were reduced to 13 players when Marika Koroibete was yellow carded for playing the ball on the ground close to his try-line but despite his departure, the Wallabies held on and the teams changed sides at half-time with the score deadlocked at 8-8.

Despite Koroibete's absence, Australia made the brighter start to the second half courtesy of a penalty from Hodge in the 50th minute but New Zealand struck back two minutes later when Taylor scored their second try off the back of a lineout drive deep inside Wallabies territory.

That score did not deter the home side, who reduced the deficit to a point by the hour-mark when Hodge added his third penalty. In the 68th minute, it was the All Blacks' turn to play with 13 men when Scott Barrett was yellow-carded after he slapped the ball from Nic White's hands when the Wallabies scrum-half tried to clear from a ruck. Hodge succeeded with the resulting penalty which gave his side a 17-15 lead.

Australia continued to attack and were rewarded in the 75th minute when Tupou barged over from close quarters and although the All Blacks struck back with a late try from Vaa'i, it wasn't enough as the Wallabies held on in the game's dying moments to secure their first Test win of 2020. 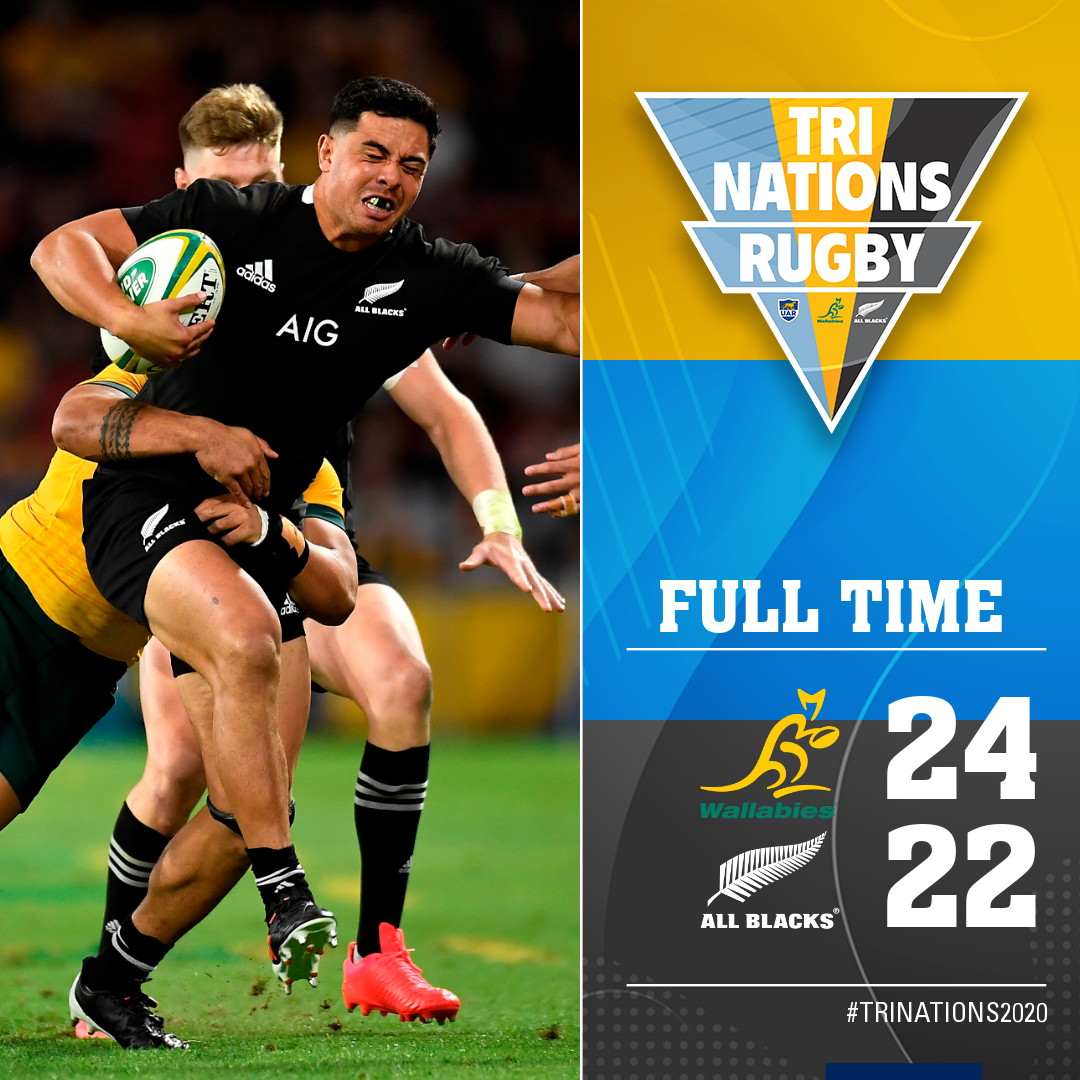