RUGBY'S GREATEST OF THE DECADE RECOGNISED AT WORLD RUGBY AWARDS

11 SANZAAR member union players selected in Team of the Decade as Richie McCaw is named Men’s Player of the Decade.

The World Rugby Awards Special Edition in December celebrated members of the rugby family who have provided outstanding service during the COVID-19 pandemic as well as players and teams who have starred over the last decade in a virtual show.

Instead of the traditional awards celebrating performances on the pitch in 2020, fans had the opportunity to vote for six Player and Try of the Decade Awards with the World Rugby Awards’ star-studded panel given the difficult task of selecting two Teams of the Decade.

A total of 394,795 votes were cast by the public across the six categories during the voting window in October with rugby fans eager to have their say on who should claim the prestigious accolades for last decade.

Six nations are represented in the World Rugby Men’s 15s Team of the Decade selected by the star-studded panel with seven players from New Zealand, three from South Africa, two from Ireland and one each from Australia, Italy and Wales. The Team of the Decade boasts a total of 1,637 test caps between them. 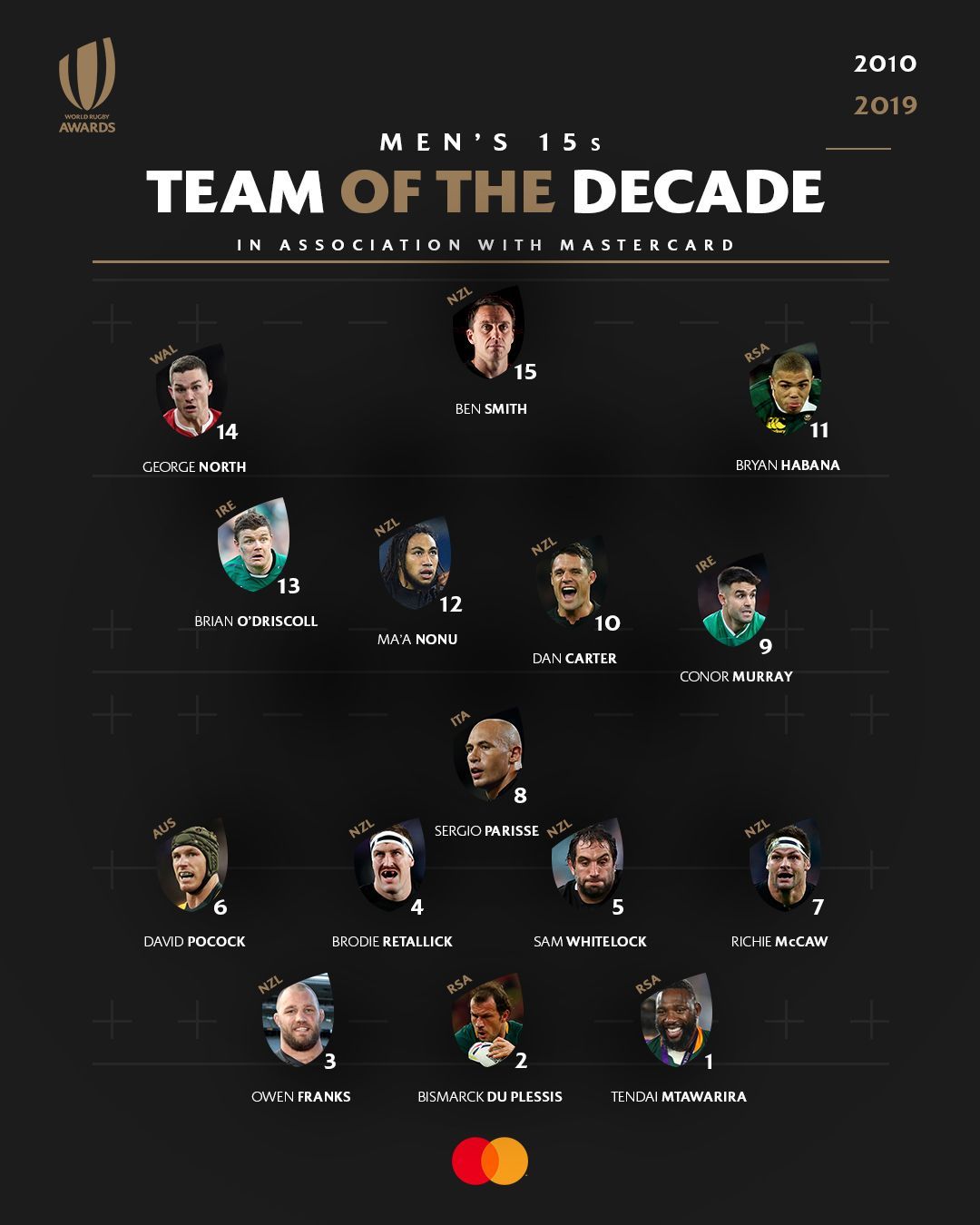 The World Rugby Women’s 15s Team of the Decade in association with Mastercard was selected by the panel that traditionally determines the annual accolade and, after much debate, features eight players from England, six from New Zealand and one from France. Fourteen of the team have won at least one Rugby World Cup, the exception being number eight Safi N’Diaye who has two bronze medals to her name.

The World Rugby Women’s Sevens Player of the Decade was claimed by Black Ferns Sevens star Portia Woodman. The only player to be named World Rugby Player of the Year in both 15s and sevens, Woodman pipped team-mates Kayla McAlister, Michaela Blyde and Ruby Tui and Australia’s Olympic champions Emilee Cherry and Charlotte Caslick to the accolade.

Woodman claimed her second award of the night when her try against USA in the Rugby World Cup 2017 semi-final was named International Rugby Players Women’s 15s Try of the Decade.

The World Rugby Awards Special Edition also recognised the many players around the globe who chose to give up their time and volunteer with their club, a chosen charity or association during the COVID-19 pandemic to help those less fortunate. Four of these players were profiled during the show in Italy back-row Maxime Mbanda, South Africa’s RWC 2019 winning captain Siya Kolisi, Canada’s Pam Buisa and former Wales centre Jamie Roberts. Other examples can be found here.

World Rugby Chairman Sir Bill Beaumont said: “First and foremost, I am deeply proud of how the global rugby family has reacted to what has been an exceptionally challenging year. The rugby heroes featured in the ceremony and all the others that provided outstanding service during the pandemic are an inspiration to us all. This special edition of the World Rugby Awards is certainly a tribute to their resilience and solidarity.

“I would like to congratulate all tonight’s recipients for their outstanding contribution to our game over the last decade, and for some of them, for many years to come. They are already part of rugby’s history and it is my great privilege to acknowledge their legacy with these awards.