The Wallabies have gone down to Scotland 15-13 at Murrayfield after a nail-biting clash in Edinburgh.

It was a fast start and captain Michael Hooper elected to keep the hosts on their feet with a quick tap from inside the Wallabies own half setting the tone.

James O’Connor missed an early chance to open the scoring off the penalty tee before Hamish Watson scored the first try for Scotland after 20 minutes, with a trick lineout play too hard to stop from five metres out.

The Wallabies had a Tom Wright try pulled back after Hunter Paisami cleaned out beyond the ruck, as the penalty count started to blow out against the visitors.

Hooper then had a try of his own disallowed under the sticks, which would have levelled the scores with five minutes left to play in the first half, but Allan Alaalatoa was yellow carded instead and Scotland received the penalty after a high cleanout in the preceding ruck.

That decision seemed to spur the Wallabies into action and an O’Connor penalty on stroke of half-time narrowed the margin to four points at the break.

Taniela Tupou was taken off for a head injury assessment early in the second half with James Slipper shifting to tighthead prop, but the change didn’t stop the Wallabies momentum.

A simple scrum play unleashed debutant Izaia Perese, who had entered the play for an injured Jordan Petaia, with the ball quickly recycled for Rob Leota to barge over for a try from 10 metres out. 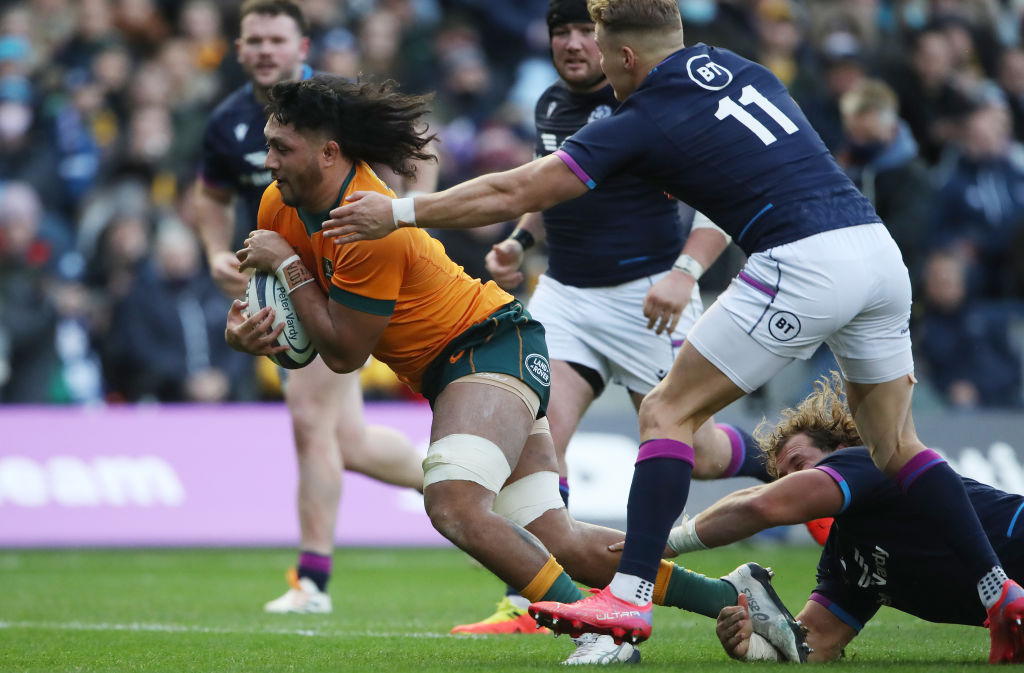 
The hosts hit back as Scotland scored in the corner after an athletic finish from debutant Ewan Ashman to re-take the lead with 20 minutes left the play.

It was tit-for-tat on the scoreboard as James O’Connor edged the Wallabies ahead after a penalty in front of the posts before Scotland did the same through Finn Russell to put their noses back in front.

Neither side grasped their opportunities in a tense final ten minutes, as Scotland held on for a two-point win at Murrayfield.

The Wallabies will now travel to London for their clash against England at Twickenham next Saturday before facing Wales in Cardiff to close out the year.