A stellar year for the Springboks was triumphantly crowned a day after the RWC Final when the team collected the three top awards in the World Rugby Awards at a glittering event in Tokyo.

The awards were rich reward for a year in which the Springboks completed the unprecedented double of winning both the Rugby World Cup and the Castle Lager Rugby Championship in the same season.

The team finished the year at No 1 in the world rankings, for the first time since 2009.

The Springboks won 10 out of 12 tests, scoring 424 points and 52 tries and conceding only 138 points and 10 tries – only four of them in seven matches at the Rugby World Cup.

Statistically, it was the most successful Springbok season since 1998 when the team was in the middle of a 17-match winning streak.

It was the first time South Africa had won any of the top three awards since 2009.

The titles came a little over 24 hours after the team had collected the Rugby World Cup for the first time since 2007, with a 32-12 win over England at the International Stadium Yokohama in Japan.

The Springboks were chosen in preference to fellow Rugby World Cup semi-finalists England, Wales and New Zealand and Japan. 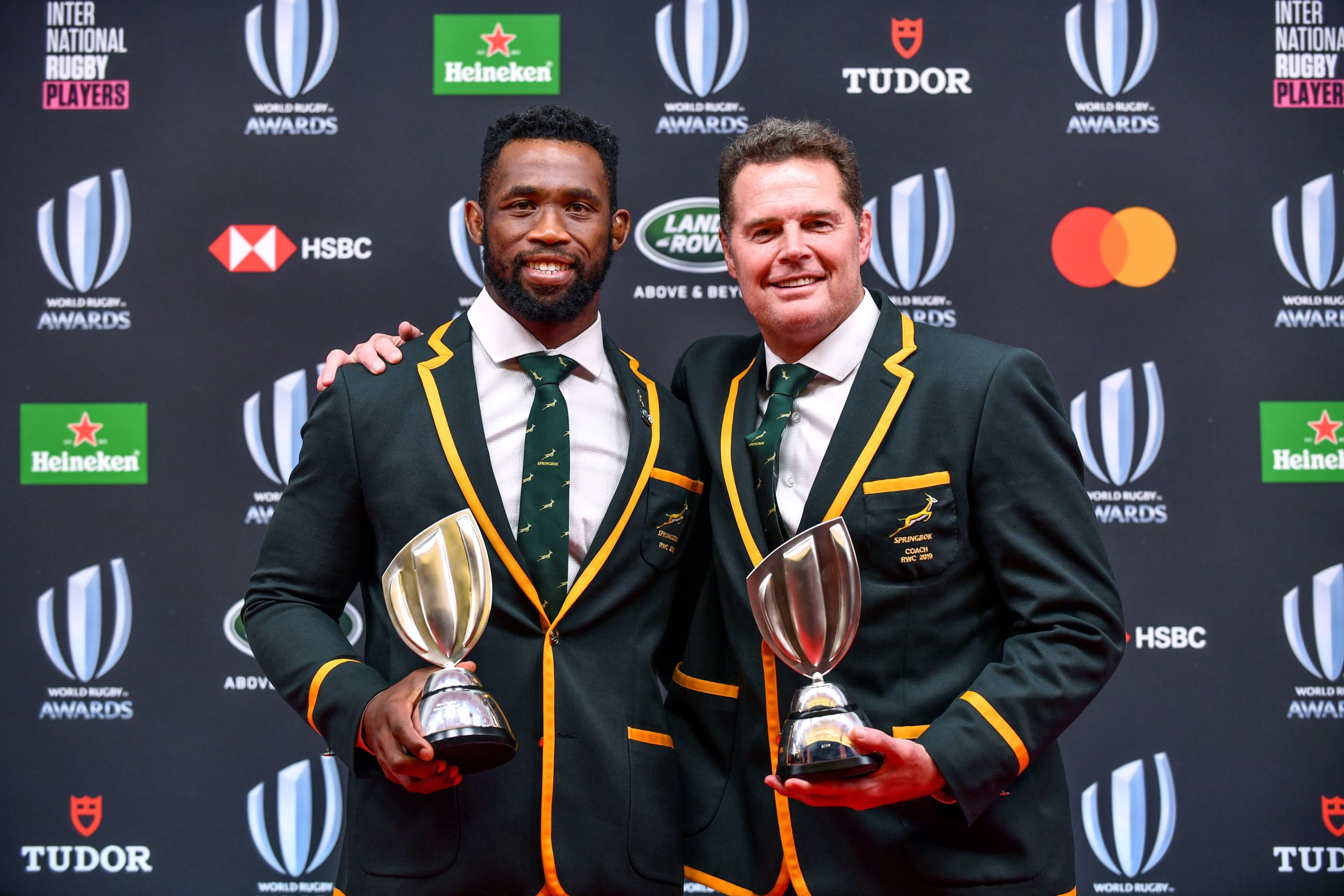 South Africa were also nominated in two other categories.

Herschel Jantjies was listed with England wing Joe Cokanasiga and France flyhalf Romain Ntamack in the category of Breakthrough Player of the Year, for players who have appeared in less than a full international season. The award was won by the 20-year-old Ntamack who has established himself as his nation’s preferred flyhalf.

Cobus Reinach’s hat-trick try in the 66-7 demolition of Canada was nominated as one of the four tries of the year. TJ Perenara of New Zealand took the award for a length-of-the-field score involving several players against Namibia.

New Zealand Rugby Chief Executive Steve Tew congratulated South Africa for a remarkable win that had won over the hearts of many rugby fans around the world.

“The All Blacks love the contest and rivalry with South Africa, but we also share a special friendship borne out of mutual respect, admiration and love for the game.  They deserve the accolades and we look forward to hosting the World Champions in New Zealand during the Investec Rugby Championship next year," he said.

As the curtain closed on RWC 2019, Tew acknowledged the efforts of World Rugby and Japan Rugby to host a remarkable tournament which saw record crowds at matches.

Tew gave special tribute to Ruby Tui, named Women’s Sevens player of the year, and TJ Perenara, who won Try of the Year.

“The Black Ferns Sevens show us every year just how remarkable they are.  We were proud even before the ceremony began, knowing that every nominee in the Women’s Sevens category was a Black Ferns Sevens athlete, and one of our own was guaranteed to take the trophy.   This speaks volumes about how highly regarded they are on the world stage.

“Congratulations to Ruby on winning this award.  She can be very proud of her efforts in striving for excellence; her leadership both on and off the field make her a key figure in the team.  I know that her fellow nominees, Tyla Nathan-Wong and skipper Sarah Hirini, would be equally thrilled for her,” he said.

"TJ's try was a pure crowd pleaser - there wouldn't be too many fans watching in the stand or at home, that wouldn't have been impressed with the skill on display, and the sheer excitement that that try delivered.