Duane Vermeulen will make his first appearance for the Springboks since the 2019 Rugby World Cup final when South Africa resume their Rugby Championship campaign against Australia at the CBUS Super Stadium in Gold Coast.

The experienced No 8 – who joined the Springbok squad at the start of the Castle Lager Lions Series in August but has yet to play a match – has recovered fully from the ankle surgery he had earlier this year and headlines the return of a handful of injured players for the important encounter.

Scrumhalves Faf de Klerk (leg strain) and Herschel Jantjies (hip pointer), and flank Marco van Staden (ankle) are also back from injury as Springbok coach Jacques Nienaber made 13 changes to his matchday squad for the match – seven in the starting lineup and six on the replacements bench.

Five of the changes to the starting team that defeated Argentina 29-10 in the second round of the Rugby Championship in Nelson Mandela Bay were amongst the forwards. Vermeulen takes over from Jasper Wiese at the back of the scrum, and Eben Etzebeth comes in for Marvin Orie at lock, while a new front row of Steven Kitshoff, Frans Malherbe (both props) and Bongi Mbonambi (hooker) will be in action.

The two changes in the backline are on the right wing, where Sbu Nkosi replaces Cheslin Kolbe who took a knock to the leg at training, and scrumhalf, where De Klerk returns for the first time since the second Test against the British & Irish Lions in place of Cobus Reinach.

Nienaber was pleased to have a handful of players back from injury as the Springboks embark on a challenging four week stretch to defend their Castle Lager Rugby Championship title, with back-to-back Tests against Australia before successive encounters against New Zealand.

“We have been following the progress of the injured players on a daily basis, so we knew that we would be in a position to select most of them for this match,” said Nienaber.

“Duane, Faf and Herschel are Rugby World Cup winners, and so is Eben, who is back after we rotated him to manage his workload, while Marco has made a strong impact on the field this season as well, so we are pleased to have them back in the fold."

“Australia pose a strong threat with their running rugby and they like to keep the ball in play. They will also be playing in front of a charged-up home crowd, so it will be good to have these experienced players back as they know what it takes to perform in big matches.

With the Springboks’ last Test being close to three weeks ago, Nienaber said it was important for the team to hit the ground running against Australia to maintain the momentum they’ve built up this season.

“We had sufficient time since our last Test to give the players a break after the physically taxing start to the season, and to work in a hard conditioning week before we tackle the remaining four Castle Lager Rugby Championship matches,” said Nienaber.

“We will be tested thoroughly in the next four weeks, so we have to be up for the challenge mentally and physically. There are also trophies such as the Nelson Mandela Challenge Plate and the Freedom Cup up for grabs, so we will prepare well and give our best on the field.” 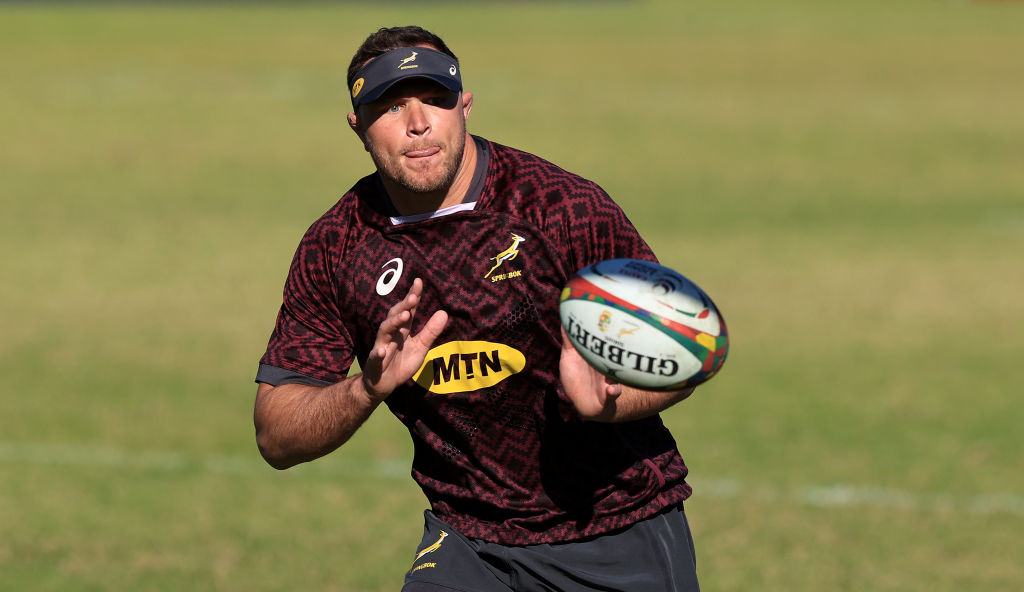 No.8 Duane Vermeulen returns for the Springboks in the Gold Coast

Quade Cooper will make a remarkable return to the Test arena after being selected at flyhalf for the Wallabies showdown with Rugby World Cup holders, South Africa, on the Gold Coast on Sunday night.

The Rugby Championship match will also see skipper Michael Hooper equal George Gregan’s record for most Tests as Wallabies captain, when he leads the side out for the 59th time at Cbus Super Stadium. In his 112th Test, the match will also see Hooper overtake George Smith as the fifth most capped Wallaby of all time

The fixture will also be the starting debut for Angus Bell, the youngest member of the squad as he joins hooker Folau Fainga’a and tighthead prop Allan Alaalatoa in the front row, with the latter set to bring up his 50th appearance for the Wallabies.

After returning to the Test side via the pine last week, Izack Rodda earns a starting berth in the second row alongside Matt Philip. The backrow remains unchanged for the third consecutive Test with blindside flanker Lachlan Swinton and number 8 Rob Valetini joining Hooper, who will fill the familiar number seven jersey.

Reds nine Tate McDermott will partner Cooper in the halves with the midfield combination of Samu Kerevi and Len Ikitau earning another opportunity together.

Cooper's last Test was more than four years ago, when he ran out against Italy at Suncorp Stadium in June 2017. The mercurial flyhalf has a strong record against the Springboks, boasting nine wins against the reigning world champions over his 70-Test career.

A settled back three sees Marika Koroibete on the right wing, Andrew Kellaway on the left wing and Tom Banks at fullback.

Western Force hooker Feleti Kaitu’u is one of two potential debutants named on the bench. Gold Coast local James Slipper will play his 107th Test in front of his family and friends with Taniela Tupou set to be unleashed as the reserve tighthead prop. Melbourne-born Rob Leota is the second potential debutant in the squad, with Brumbies backrower Pete Samu retaining his spot in the match-day 23 after an impressive impact in Perth last weekend.

Australia has won eight of their last 10 matches against the Springboks at home, but the two sides have never met at Cbus Super Stadium on the Gold Coast in the storied 88 year playing history.

Wallabies coach Dave Rennie said: “We’re thrilled for Quade that he’s earned another opportunity to pull on the gold jersey for his country. He’s had a really positive impact since joining the group, put pressure on us as selectors and he’s excited to get out there and perform on Sunday night."

“The match is also a huge occasion for our leader Michael Hooper. He’s been in phenomenal form and to equal George Gregan’s record as the most Tests as captain of Australia is a testament to his leadership and resilience."

“We also can’t overlook Allan and Reece who will bring up 50 Tests for their country, another outstanding achievement for two ultimate professionals who leave it all on the field every time they wear the jersey.”