Springboks are Champions of the World

The Springboks are Rugby World Cup champions after demolishing England in a magnificent final 32-12 to maintain the Souths grip on the Tournament.

The two tries, in the last quarter of the match, saw the Boks crush England and claim a third crown in the world showpiece, 12 years after John Smit's side won the Cup and 24 years after Francois Pienaar held the Webb Ellis Cup aloft with the last Nelson Mandela.

The Springboks held a 12-6 lead at the break, but never looked like surrendering that lead thanks to an enormous effort from the pack of forwards.

The two tries, both created from some clinical finishing by the wingers, were dramatic to say the least, but the foundation of the epic win came from a strong scrum that never took a step back all day.

Up to that point, Handré Pollard unnerving boot kept the scoreboard ticking, mainly from scrum penalties, where the front row of first Tendai Mtawarira, Bongi Mbonambi, Frans Malherbe and then Steven Kitshoff, Malcolm Marx and Vincent Koch having no peers on the day.

The two late tries eased the nerves of more than 50 million South Africans supporting the team in Japan.

At the start both teams belted out their national anthems with gusto and carried those passions into the first phases of play. 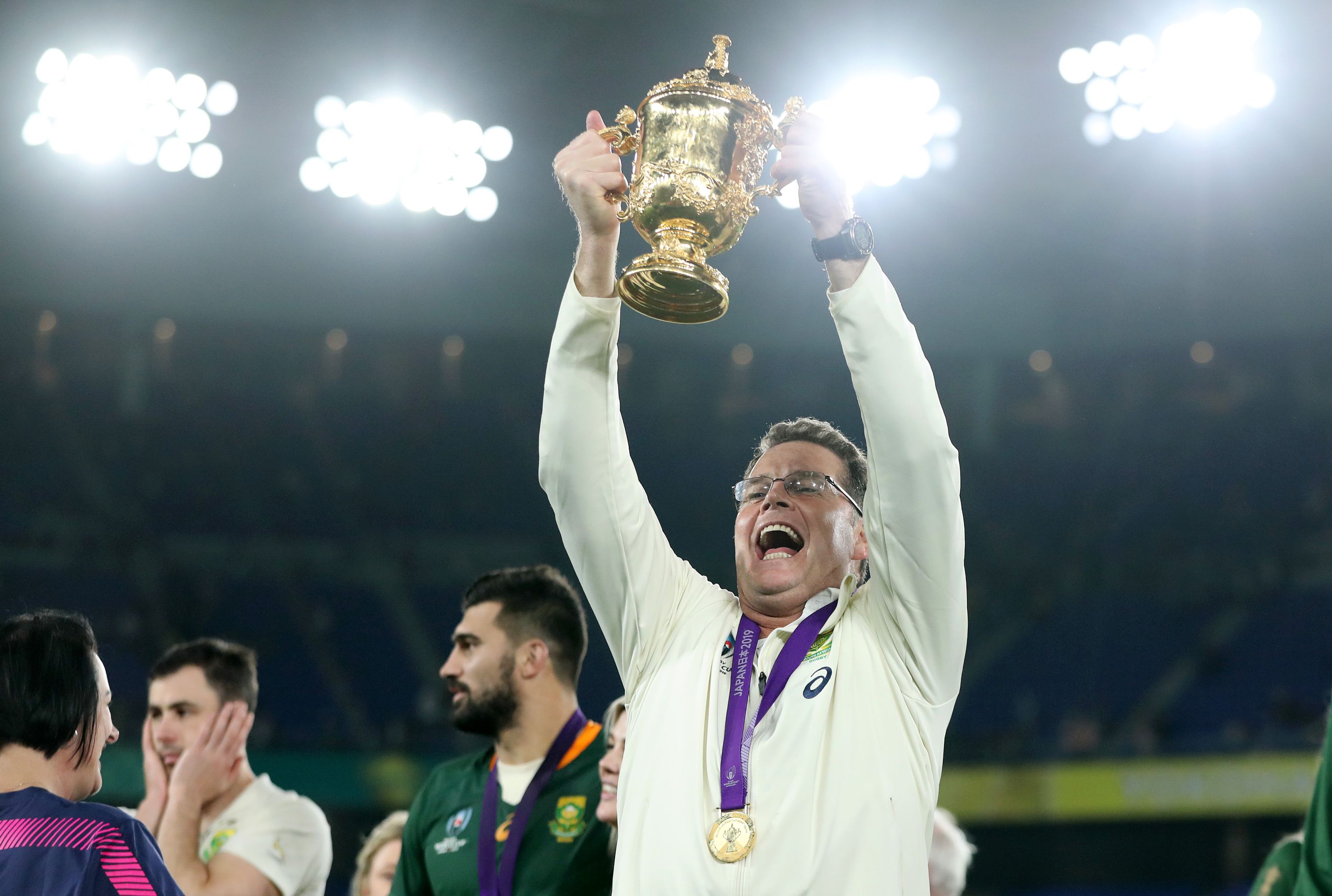 England, with the wind behind their backs, found a strong force in their faces as well as the South African pack laid down some early markers.

The Springboks had an early chance with England not rolling away after a tackle on Malherbe, but Pollard pushed his first attempt to the right from 40 meters out.

The Springbok pack showed early dominance in the scrum and England's cause was not helped by the departure of Kyle Sinckler in the second minute after a head-knock in a tackle, forcing England into an early substitute with Dan Cole coming onto the field.

The Springboks scrum dominance brought them three penalties in the half and all were turned into points by Pollard.

A strong Bok shove on England's put-in had the men in white under pressure and they were forced into another mistake, holding on to the ball. Pollard slotted the penalty in the ninth minute to hand his side the lead they would never surrender.

The momentum swung the other way though as the Springboks conceded a penalty near their own line and Bongi Mbonambi left the field for a HAI. Owen Farrell kicked the first points for his team to draw scores level.

At the same time Lood de Jager left with a dislocated shoulder and was replaced by Franco Mostert. Mbonambi, who would not return to action, was replaced by Malcolm Marx.

There was a strong repost by the Boks. England fumbled the kick-off and the Bok pack - with another strong scrum forcing another penalty - gave Pollard the opportunity to kick his side into the lead again.

England attacked strongly through various phases, but could not break the line, but were rewarded with a penalty which Farrell kicked to even the scores again in the 35th minute.

From the resulting kick-off the Boks again applied the pressure and England were penalised. Pollard immediately restored the lead.

England kicked deep, but the Boks unexpectantly ran from within their 25.  Faf de Klerk's long pass prompted a good break from Lukhanyo Am. He kicked ahead, forcing a knock-on by Elliott Daley.

It was almost inevitable that from the resulting scrum, England was found wanting again, giving Pollard his fourth penalty kick of the half.

The second half saw an early call to the bench with  Vincent Koch and Steven Kitshoff coming on for Frans Malherbe and Beast Mtawarira. Their first contribution was a penalty from a powerful scrum. Pollard kicked his fifth penalty goal.

England struck back with a scrum penalty of their own and Farrell kicked his third penalty from 40 meters out.

The lead was back to six points with 30 minutes to play.

Pollard turned into villain briefly as he slipped while trying to run from deep and was pinged for holding on. Farrell's kick brushed the uprights, but on the wrong side

A sixth penalty goal from Pollard restored the halo around his head.

England were caught napping from a varied line-out play by the Boks and they went offside within range of the Springbok flyhalf's boot.

The lead was back to nine but from the kick-off, Marx came into the ruck from the side and Farrell slotted the kick to make it six points again

Pollard had an opportunity to extend that again with a 59 meter kick. That came up short, but the play after that not.

The Springboks went blind, where Marx soft hands had Mapimpi in space and running strong. When confronted he chipped ahead where Am gathered and played to the Eastern Cape flyer on the outside again. The converted try, South Africa’s first in a final, had the Boks 25-12 up. 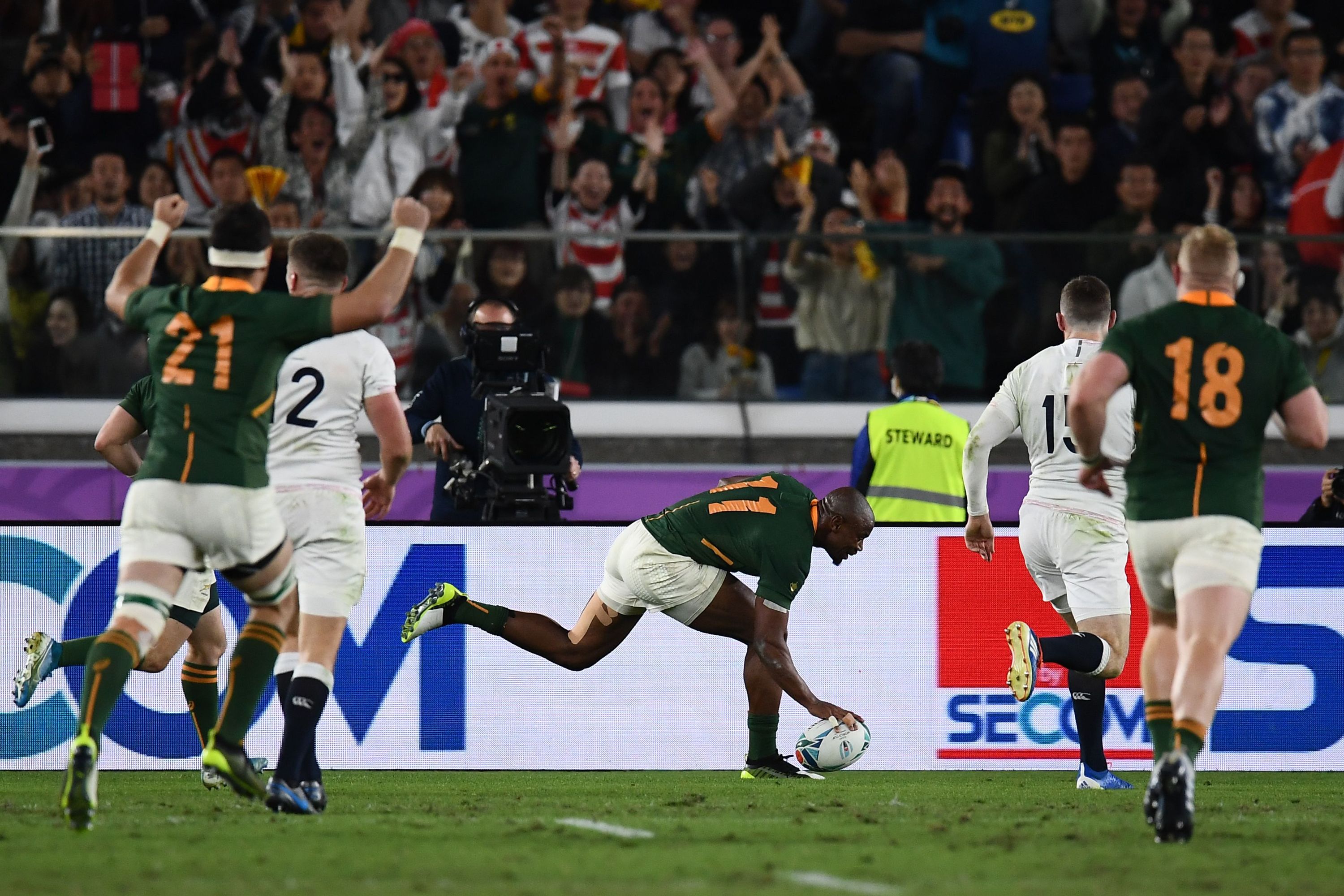 England attacked from all angles and Anthony Watson ran strongly, but lost the ball in the tackle and the opportunity was lost.

The second try, by Cheslin Kolbe, was another gem.

This time a Marx tackle forced a knock-on. Am send it to Pieter-Steph du Toit who found Kolbe in space.

The winger stepped inside one defender and then outside of the cover defence to score his own try.

Pollard conversion pushed the lead to 20 and the engraver could start his work on the Webb Ellis Trophy.