Springboks Edge Scotland in a Close One

The Springboks continued with their fine recent form by beating Scotland 26-20 at Murrayfield in Edinburgh.

Scotland would be right to conclude that they had conspired against themselves but the Springboks can thank their key breakdown performers for their hard fought 26-20 win at Murrayfield in Edinburgh on Saturday night.

It might have been a different outcome had the Scots kicked for goal instead of for touch when they still had their captain and ace goalkicker Greig Laidlaw on the field in the 59th minute. By then it was clear this closely fought game would go down to the wire, and the Scots trailed by just three points (23-20).

It was an easily kickable attempt for Laidlaw, but he decided instead to set up the attacking lineout. Not for the last time on the night the Boks killed the Scottish momentum by resisting the drive and forcing a scrum. The chance was gone for the Scots and when they tried a long-range drop-goal not long after that it was an admission that the initial call was the wrong one.

But what really won the game for the Boks was the efforts of Malcolm Marx, Duane Vermeulen, Siya Kolisi and later on in the piece Thomas du Toit and Bongi Mbonambi at the breakdowns. There were several turn-overs that went the South African way in this game that ultimately made up the difference between the teams.

In the first half it led to a try, later in the game it was a case of the Boks tying up the Scotland attempts to wrest the initiative their way in a game where they always trailed, but not by much.

While many South Africans will consider it an underwhelming win by their team based on the Boks’ history at the venue, it wasn’t that.

Any win over Scotland at their headquarters these days is a good one, and like Paris last week, it was another pressure test that was passed by the Boks. They showed good composure in the final quarter, when they started to win more territory after it had been the Scots who dominated both territory and possession for the middle 40 minutes of the game. Once again the Bok bench made a significant impact.

The star of the Bok show, apart from the forwards already mentioned for their work at the breakdowns, and a shout-out too to Vincent Koch for the big tackles he put in when he came on, was flyhalf Handre Pollard. He was instrumental in both of the tries, and until his place-kicking authority suddenly deserted him late in the game and Elton Jantjies took over for one vital kick, he kicked well for posts and was a constant thorn to the Scottish defenders.

Not far behind was young Embrose Papier. The scrumhalf was making his first start and apart from the natural flair that has seen him elevated up the South African halfback pecking order at a very tender age, he showed a vast improvement in his kicking game.

With one notable exception, his box kicks were on the money. He produced a mature performance which should steady the nerves of coach Rassie Erasmus when he thinks of back-up to first choice Faf de Klerk.

Given the obvious improvements in the Papier game, which is surely an indication of how hard the coaches must have been working with him behind the scenes, Erasmus should also be lauded for the timing of his introduction of Papier to the starting team.

The match was a game of two halves, with the first being fast-paced and entertaining and the second becoming more of an arm-wrestle. The Boks should look back at the 10 minutes that they were down to 14 men after Willie le Roux was yellow carded for what referee Romain Poite saw as a deliberate knock-down, as an example of how they should have played for much more of the game.

It was a bizarre call and surely a wrong one, but it did provide the cue for the Boks to take a more direct approach. They held onto the ball better and threatened the Scots more in that period when they were down on numbers than they did for much of the rest of the game.

As anticipated, the Scotland approach determined that in the first half we saw a game quite unlike the two that the Boks had played prior to reaching Edinburgh on this tour. Although it was the Boks who enjoyed the early momentum, and who scored first, the Scots made their intention of trying to quicken up the game and keep the ball in hand known from an early stage.

Both teams played with a tempo and pace that at times made it resemble a Super Rugby game. The big emphasis for the Boks was always going to be them assuming forward dominance, and they did appear to have the physical edge, but they didn’t get to drive up through the middle in the manner that South African fans would have been hoping for as a first step towards them unlocking the Scottish defensive system.

They were the first to score though - indeed they were never headed in the game - and their early lead came courtesy of one of their best tries of the season. It was started by Willie le Roux fielding a Scotland kick in the fifth minute, and then Pollard executing an electrifying break through the inside channel off the recycle at resulted from Pieter-Steph du Toit taking the ball up.

Embrose ran an excellent support line and then after taking the inside pass made the right decision in cutting back infield before RG Snyman offloaded to Steven Kitshoff, who in turn got the ball through the tackle to Sbu Nkosi. The wing was held up short of the line but the ball was transferred inside off the loose scrum and Jesse Kriel used his power to get himself over the line.

As good as the Bok try was, so was the first Scotland try. Initially the Scots appeared to be having problems with the high lining Bok defensive system, and spilt more ball than they would have liked. But in the 18th minute the Scots finally got an attack together, and for their fans it would have been worth waiting for as their team produced some sublime handling and off the ball running.

Former Western Province centre Huw Jones featured prominently early in the movement as his deft pass created the space outside that the Scots exploited, and then he featured again as a little switch flick to the outside later in the movement put centre partner Peter Horne in for the try.

Pollard made his debut against Scotland in Port Elizabeth in 2014 and obviously likes playing against them. He capped his solid performance with the second Bok try as the Boks capitalised on a poor decision by the Scots, who were turned over trying to run the ball out of their own territory.

That try came in the 21st minute so it was a quick response from the Boks to the first Scotland try, and it didn’t take them long after that to extend the lead to 10 points as Pollard kicked a penalty in the 25th minute.

The Scots responded with a penalty of their own and then came a superb counter-attack from Scotland fullback Stuart Hogg, who used his pace to round the Bok defence and force Willie le Roux to hack the ball out. At the resulting lineout the Scots produced a variation that sent flanker Hamish Watson through the middle to score.

Pollard kicked a penalty to make it 20-17 at halftime but the Boks knew they were in a tough contest and it was a test of nerve after that. They passed it and the fact they have another tick in the win column is what really matters at the end of a long and exhausting rugby year. 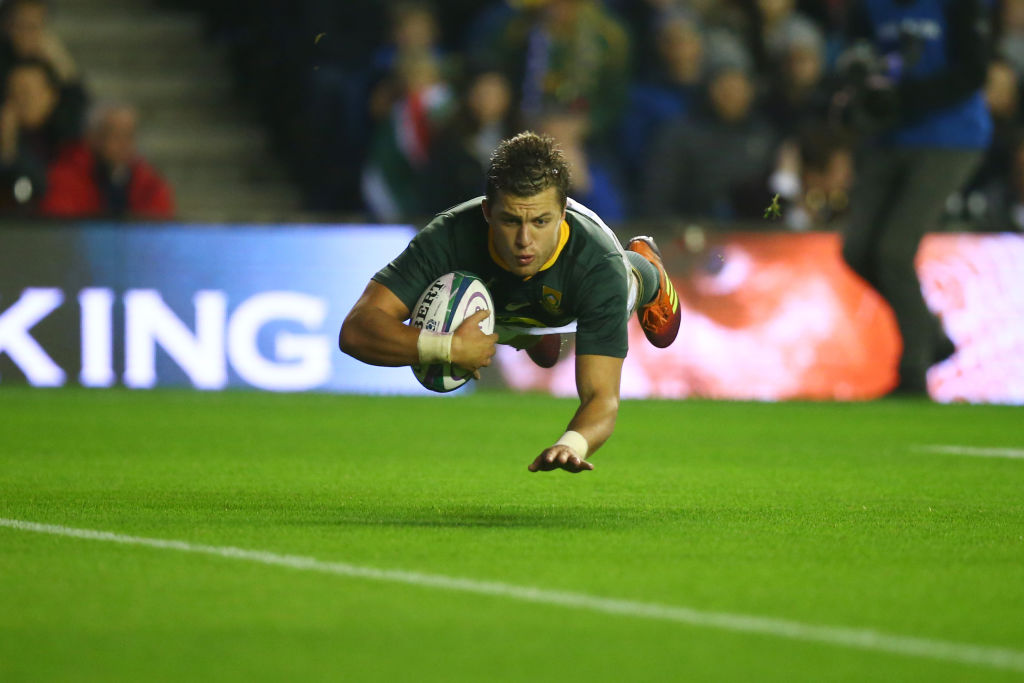