Springboks Edge Wallabies in Close One

South Africa continued with their fine recent form when they beat Australia 23-12 in the Round 5 Rugby Championship Test in Port Elizabeth.

In a tightly contested match, the Springboks were made to work hard for this result as they were under plenty of pressure for long periods but a solid defensive effort, particularly in the second half, kept the Wallabies at bay.

Both teams scored two tries apiece, although excellent goalkicking from Handré Pollard proved to be the difference between the sides and he contributed 13 points courtesy of three penalties and two conversions.

The victory is South Africa's third of the tournament and consolidates second position on the table while Australia are still firmly rooted to the bottom of the standings.

South Africa made a terrific start when 25 seconds into the match Kurtley Beale threw a long pass - close to his tryline - which Aphiwe Dyantyi intercepted, from under the nose of Dane Haylett-Petty, before crossing for the opening try.

Pollard slotted the conversion which meant the Boks had their tails up with the score 7-0 in their favour.

Three minutes later, the Wallabies had a chance to narrow the gap when Matt Toomua lined up a penalty, after the Boks strayed offside on defence, but his shot at goal was wide of the posts.

The home side held the upper hand over the next 15 minutes but, despite having the bulk of the possession, they could not convert their dominance into points.

Despite being on the back-foot during that period, the visitors were kept in the game thanks to a superb defensive effort with David Pocock leading the charge with two crucial steals at the breakdown.

However, the Boks' fortunes would change in the 21st minute when Pollard beat a couple of defenders inside the Wallabies' 22 before throwing an inside pass to Faf de Klerk, who raced away before scoring next to the posts.

Despite that score, the visitors stayed true to their attacking roots and ran the ball from all areas of the field. And in the 26th minute that tactic reaped reward when Will Genia threw a long pass to Reece Hodge, who dotted down in the right-hand corner.

Toomua's conversion was off target but shortly afterwards Marika Koroibete found himself in space down the left-hand touchline, inside South Africa's half, before throwing a pass to Genia, who cantered in for the visitors' second try.

This time Toomua was successful off the kicking tee which meant the match was evenly poised with the Springboks leading 14-12.

However, in the 34th minute, Australia strayed offside on defence close to their tryline and Pollard added the resulting penalty to give his side a five-point lead.

The Wallabies had a chance to narrow the gap shortly afterwards when Pollard was blown up for offside play but Reece Hodge was off-target with a long range penalty.

Just before half-time, Siya Kolisi did brilliantly to win a penalty for his side at a breakdown and Pollard added another three-pointer which gave the Boks a 20-12 lead at the interval.

The Springboks made a bright start to the second half and six minutes into the half they extended their lead when Pollard slotted another penalty after Pocock was blown up for an illegal hit on Dyantyi.

The next 20 minutes was an arm wrestle with Australia spending long periods inside South Africa's half but, although the visitors were awarded several penalties within goalkicking range, their captain, Michael Hooper, opted to kick for touch instead.

In the 64th minute, the Springboks' penchant for conceding penalties proved costly when Dyantyi was yellow carded when he slowed the ball down cynically at a ruck inside his 22.

That gave the Wallabies a chance to up the ante on attack and, although they did just that, a combination of unforced errors and the Boks' excellent defensive work kept them out during Dyantyi's stint off the field and the game's closing stages. 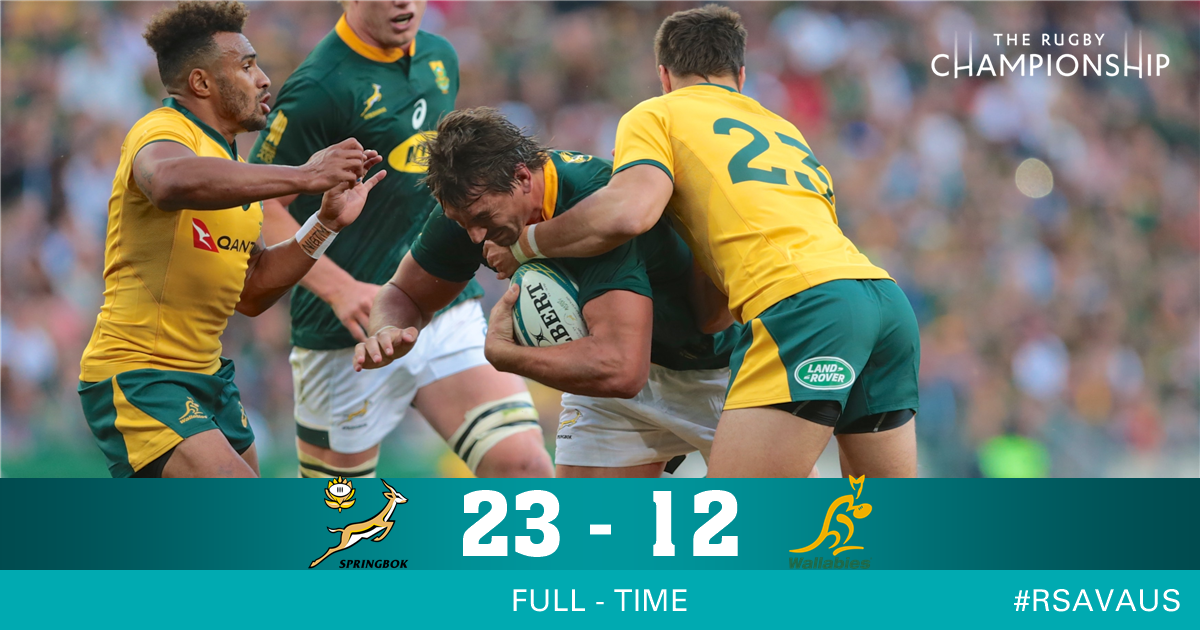