The Springboks produced a second half revival to beat hosts Japan and clinch a place in the Rugby World Cup semi-finals.

After a ‘nervous’ first 40 raised hopes for a packed home crowd of a repeat of the ‘Miracle of Brighton’ which had seen Japan turn the rugby world on its head with victory over South Africa four years ago.

The Springboks stretched away from an edgy two-point halftime lead (5-3) with 21 unanswered points in the second half.

Makazole Mapimpi scored two more tries to take his tally to 13 in 12 Tests, while Faf de Klerk finished off a 40-metre rolling maul to claim the third.

“We’re happy to be through to the semi-finals but we were very nervous at halftime,” said Rassie Erasmus, South Africa’s director of rugby.

“Overall we were nervous going into this match; playing Japan with their home support and the way they played against Ireland and Scotland and they were definitely building momentum today.

“Going in at halftime we were only a few points up and having left a few tries out there, there was definitely a bit of a lull and a quietness in our change room.

“But I think after being together for 17 weeks the guys knew which buttons to push to get ourselves out of that lull and come and produce it in the second half. I’m proud of that. We’re through to the semi-finals and hopefully we can pull it through.”

“If guys miss tackles and there’s a lack of commitment and there are effort errors, harsh words might help,” said Erasmus.

“But if it’s a bad pass or a missed opportunity or a skill error then it’s more a question of trying to get the guys confidence up and I guess that was the challenge at halftime.

“That’s where Siya and Duane and those guys did well at halftime. I think Siya and the boys did most of the talking and sorted that out.”

Kolisi said: “The message at halftime was to be patient and trust our plan. Our maul and our scrum were working. We didn’t take our opportunities in the first half, but we didn’t want to change anything, especially when we got turnover ball.

“And in the second half it worked. We got a mauling try and our scrum gave us penalties that gave us points. That was the main message – stick to the plan – and having positive chat throughout the game,” said Kolisi.

Erasmus was satisfied that the gameplan triumphed in the end.

“I don’t think it was a lack of effort in the first half,” he said.

“It was more the pressure Japan put on us and the amount of effort and intensity that they put onto us in the first half.

“I think we did really well in terms of intensity. But in terms of execution we weren’t that great.”

However, the outcome was an effective one for the Springboks as they stretched their record at this Rugby World Cup to four wins from five matches with only three tries conceded – and 30 scored – and a points difference of 211 for and only 39 against.

“Two of those tries were against New Zealand in four minutes, so I think we’ve not had long spells where we were under pressure and we folded,” said Erasmus.

“There’s a lot of people that see a few holes in our defence. But we really trust our system. Defence is a pretty important thing if you want to try and win a World Cup. But we were certainly tested today.

“To concede only 10 points in two games against Japan who have got a really good track record in this World Cup, the previous World Cup and the Pacific Nations Cup is good. We’ve got good confidence in our defensive system.”

That defensive system worked out to plan, with Japan succumbing to the Springboks’ set piece gameplan. 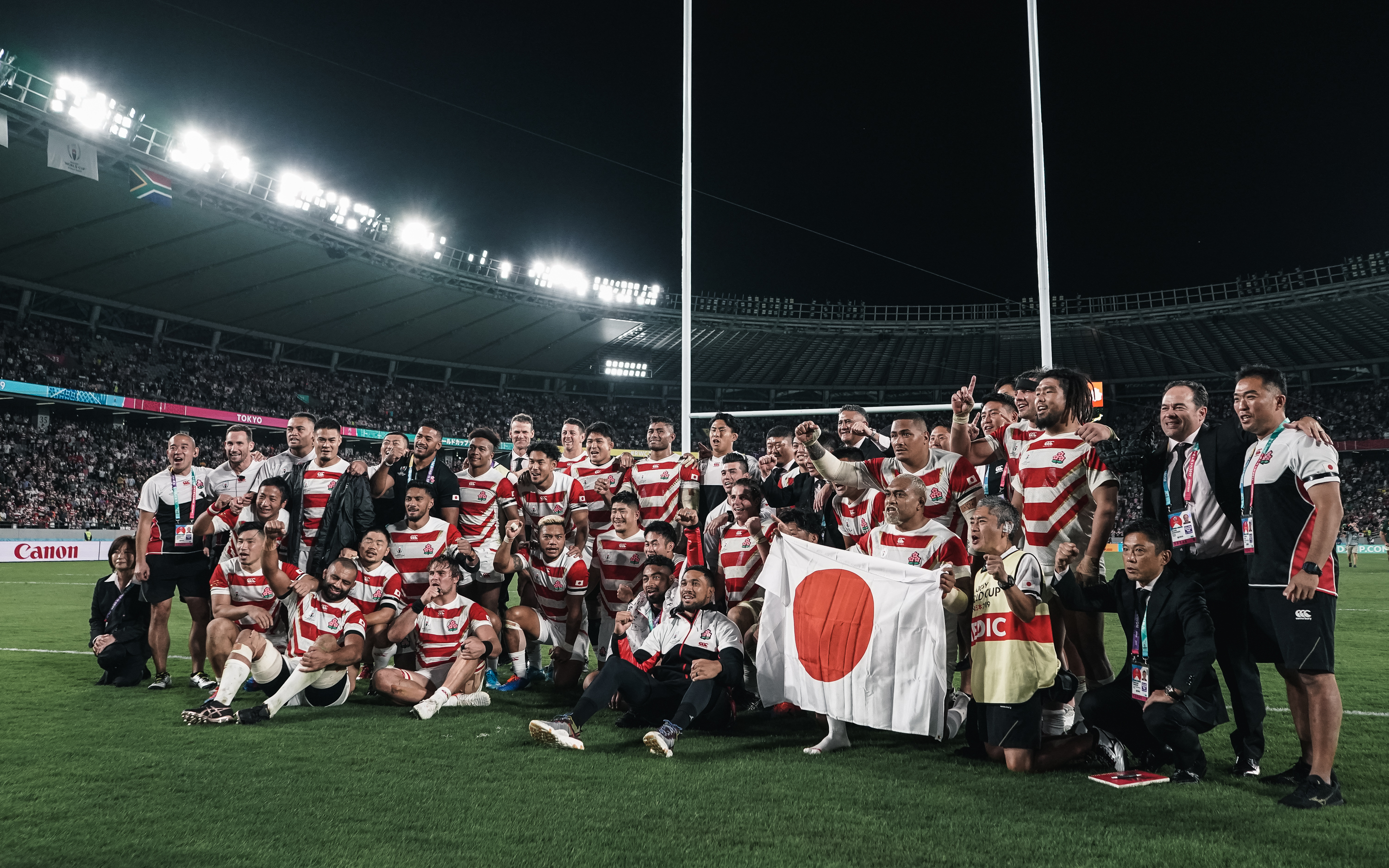 “We expected Japan to be a high-paced team, a fit team a team that almost announced in the media how fast they wanted to play,” said Erasmus.

“Our team selection was in the first place to see how – in the tight phases, the scrums, the mauls, the breakdown – we could physically impose ourselves there and in the same breath how we could contain their speed and the individual ‘Ferraris’ that they have.”

It was a particular challenge when the Boks were reduced to 14 men after the yellow carding of Tendai Mtawarira for a tip tackle.

Kolisi said the faith in the system had been the key for the team.

“There was a lot of heat coming – the ball was moving fast,” he said.

“But the things we pride ourselves in are our defence and work rate and how hard we work for one another. I think that’s what came out in that ten minutes.

“We knew what we needed to do. We had to work that bit extra but, as coach said, we have been together for so long, those kind of moments are when we pull together; that was one of those moments.”

Meanwhile Erasmus identified where the team needed to improve to advance in the tournament.

“We must find those pressure points and when we get the opportunities, we must utilise them and then don’t give away soft moments,” Erasmus said.

“That’s when we will have a real chance and be consistent. I think that’s the biggest work-on for us.

“I think we have the pack; I think we have the backline players to go all the way; but I think in a game which is 80 minutes and 40 minutes ball-in-play if you have four or five minutes of ball in play where you drop your concentration, which we did against New Zealand, you get found out

“There was three or four minutes against Japan when we almost got caught out. So, I’d say we don’t have to improve that much in specific departments such as scrumming, mauling, lineouts or breakdown.

“It’s more to concentrate for the full 80 minutes where we need to improve if we want to try and win the World Cup.”