Springboks Lose Out To France in Tight Tussle

The Springboks fell agonizingly short as France ended a run of seven successive defeats by the Boks with a 30-26 win in Marseille.

The Boks played for 58 minutes with 14 men - after Pieter Steph du Toit was red carded for a head collision - and the last ten minutes with 13 men following a yellow carding for replacement Deon Fourie after a second infringement at a close-range France maul.

The home team also played the last 32 minutes with only 14 men of their own, after skipper Antonie Dupont was dismissed for ploughing into the aerial Cheslin Kolbe. The Springbok wing was upended, landing on his head, and played no further part after being withdrawn for a head injury assessment.

The Boks could proud of their effort however. They drove the game, winning the collisions for the most part and playing a high passing game against a French team that barely used their backline and resorted to the kick and the maul. The boot of fullback Thomas Ramos was their most potent weapon as he was successful with seven out of eight kicks at goal.

The Boks used three kickers (Kolbe, Faf de Klerk and Damian Willemse) – through circumstance not choice – and the trio were successful with all six kicks at goal to put last week’s Dublin troubles behind them.

It was a brilliant Test match as South Africa came back from 13-0 down shortly after their first card to lead with six minutes remaining before a spate of penalties gave France the field position to sneak a victory that should have been the Boks.

Du Toit’s horror moment arrived in the 12th minute when he was sent off by referee Wayne Barnes. The loose forward half-stumbled half-drove at knee height to clean a ruck and his head made direct contact with the cheek of centre Jonathan Danty who was seated in the ruck, facing the oncoming Bok.

His departure robbed the Boks of a back-of-the-lineout option as well as his phenomenal work rate and France took advantage within nine minutes to add to their 6-0 lead from the boot of Ramos after two offside offences by the Boks.

French wing Damian Penaud ghosted outside Jesse Kriel’s attempted tackle on halfway to make the line break. France were held short but after eight phases of close-range drives loosehead prop Cyril Baille found a gap from five metres to score just to the left of the poles.

Ramos converted to take France into a 13-0 lead against the 14-man Boks. It looked a mountain to climb. This motivated and focused Springbok team strapped on their crampons and started up the cliff face.

Base camp was a penalty goal from Kolbe in the 25th minute when the more obvious option from long range and a difficult angle was a kick to the corner.

Better was to follow five minutes later when the maul option – working better than in recent weeks – propelled Siya Kolisi over the tryline as he broke away to dive expansively into the in-goal with Kolbe converting to reduce a once yawning deficit to three (13-10).

Ramos kicked two penalty goals either side of halftime to one from Kolbe which restored the lead to six points (19-13) before the second red card of the match set up a rip-roaring second half in which the Boks claimed the lead for the first time in the 52nd minute and held if until the 74th by which time they had been reduced to 13-men. 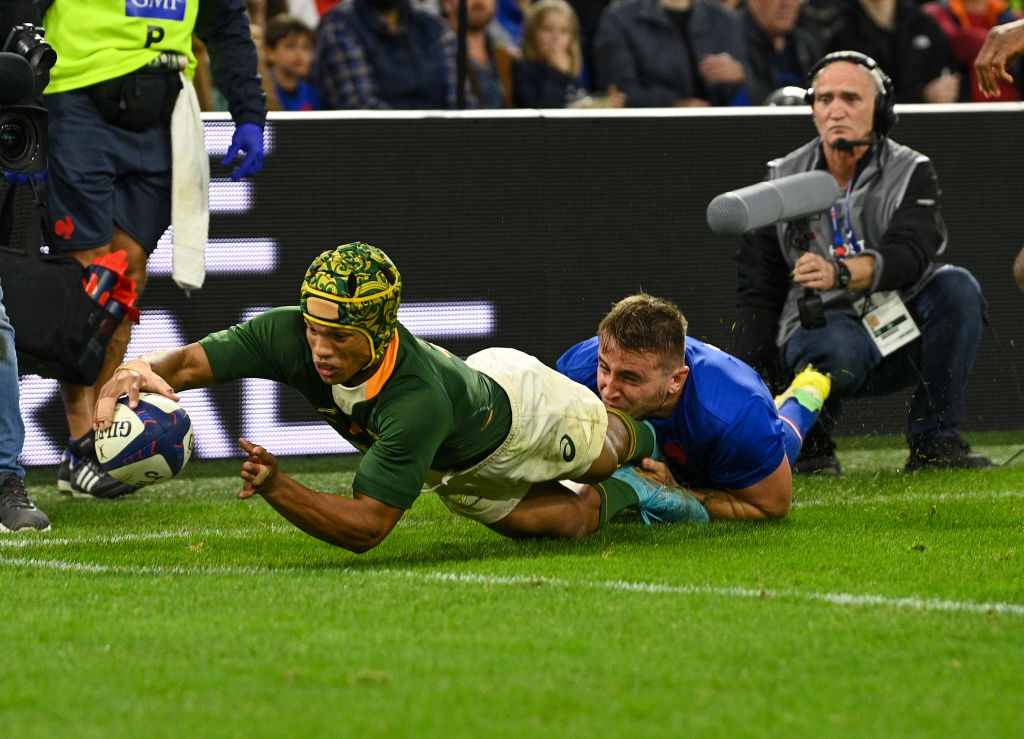 Dupont was dismissed for a dangerous challenge on the airborne Kolbe who was flipped through 180 degrees to land his head and shoulder. The wing was removed for an HIA from which he did not return.

His dismissal was the cue for the Bomb Squad to arrive and although the resulting maul drive was stopped, De Klerk and Willie le Roux combined down the blindside to put over wing Kurt-Lee Arendse [pictured above] in the right-hand corner.

De Klerk – in the absence of Kolbe – converted brilliantly from the touchline and added a penalty goal to stretch out the Bok lead to four points (23-19). Flyhalf Damian Willemse became the Boks’ third kicker – landing a tricky penalty in the 63rd minute – after De Klerk had been withdrawn.

Roared on by their home crowd and a string of penalties against the Boks, which culminated in the yellow carding of Fourie, France found the momentum to claim a second try from a close range drive with Sipili Falatea finishing after patchy consultation with the TMO on whether there had been a double movement.

A sixth penalty goal for Ramos with two minutes remaining ran the clock down to allow the home side to close out a rapturously received home victory.