World champions South Africa ended 2022 with a 27-13 win over England at Twickenham.

South Africa, who overwhelmed England 32-12 in the 2019 World Cup Final in Japan before losing by a point at Twickenham last year, held out despite playing the final 20 minutes down to 14 men after Thomas du Toit was sent off for a high tackle on Luke Cowan-Dickie.

Springbok coach Jacques Nienaber and captain Siya Kolisi praised the team for their brave effort to earn their first win over England at Twickenham since 2014, and their first personal victories in London as they registered a rewarding 27-13 victory on Saturday.

The Boks built up an encouraging 14-3 halftime lead and managed to stretch it to 27-6 in the 57th minute before being reduced to 14 men for the last 20 minutes after replacement prop Thomas du Toit received a red card for a dangerous tackle. Despite this, the team hung on as if their lives depended on it to snatch the memorable victory.

The result saw the Boks win two of their four matches on the Castle Lager Outgoing Tour – with the two narrow defeats being against the first and second ranked teams in the world in Ireland and France.

“We’ve had a couple of special results as a team, but this was the first win for Siya and I at Twickenham, so it’s very special to us,” said Nienaber.

“The forwards were outstanding and created a good platform for our backs to attack, so all-in-all, it was a fantastic team effort.”

Kolisi echoed lauded the entire team for their efforts to make the victory possible.

“Sometimes we take it for granted what a special environment one is in and the great coaching team we have,” said Kolisi.

“When we got together with most of this coaching team in 2018, we all bought into the plans and the synergy and the way we work together is really special in this group.”

Nienaber was delighted with the way some of the young players rose to the occasion and said: “With this match being outside of the international Test window there were a whole lot of players who were not available for selection, but we have a lot of players knocking on the door and it was great to give those guys an opportunity tonight.

“It’s always good to give those players a chance under such pressure in front of a packed Twickenham, which can be pretty hostile, and they stood up today.”

Asked what he had told his players when they were reduced to 14 men, Kolisi said: “We actually said last week there is nothing we haven’t faced together as a group year. We’ve even been in situation when we had a red card, so the players knew what to do.

“Everyone knew they had to work harder to make up for the extra man, and the way the forwards played was great, and everyone did their bit to get the result.”

Wrapping up the tour, Nienaber said: “This was one of the most enjoyable four weeks we’ve had had even though we only got a 50% win record. The way the team, coaches, management and the game drivers made plans and worked tightly together with it was great, and we can take a lot from this going forward.” 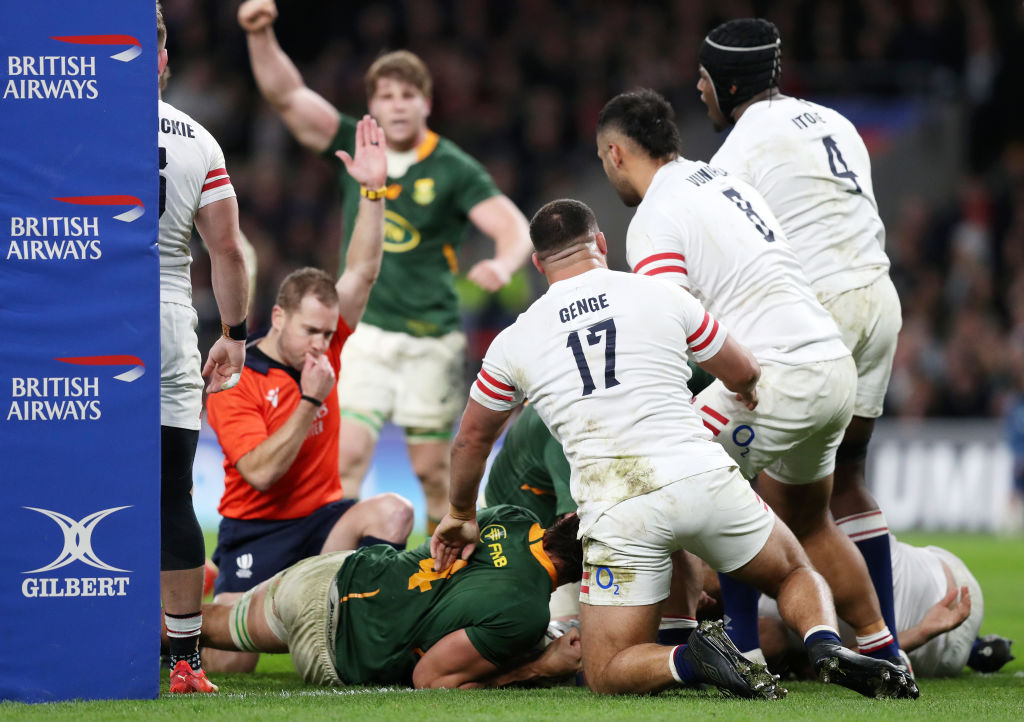