Springboks Snatch Last-Gasp Draw Against All Blacks in Wellington

Herschel Jantjies was the hero for South Africa as he scored a last-minute try to help rescue a 16-16 draw against the All Blacks in Wellington.

The Springboks controlled the opening half-hour and deservedly went 6-0 in front via Handre Pollard's boot, but one error saw New Zealand hit back as Jack Goodhue touched down for a 7-6 lead at the interval.

Beauden Barrett then added a penalty early in the second period to extend the hosts’ buffer, but Pollard kept Rassie Erasmus’ men in contention.

There was little between the two sides but the defending world champions appeared to display the greater control and quality in the latter exchanges and moved 16-9 up through successive Richie Mo’unga three-pointers.

There was one last sting in the tail from South Africa, however, as Jantjies crossed the whitewash – Pollard converting – to level matters late on.

The draw leaves the Springboks at the top of the Rugby Championship table with one round remaining while the All Blacks, who once again failed to fire in attack, are a point behind in second.

There was plenty of excitement before the game with the introduction of Mo’unga and the selection of Barrett at fullback, but the former began rather nervously.

Twice the fly-half’s kicks were charged down and it allowed a confident Springboks side to get on the front foot. They capitalised on the hosts’ errors and were rewarded by the accurate boot of Pollard, who kicked two penalties for a 6-0 advantage.

His playmaking team-mate was also struggling and their decision-making was quite simply atrocious in the opening quarter. There were mistakes aplenty and the full-back, who surprisingly took on kicking duties, missed a relatively simple chance to reduce the arrears.

South Africa were almost toying with the home side. Their defence was exceptional and the half-backs – Faf de Klerk and Pollard – were varying the kicking game nicely.

As a result of the pressure exerted, the Springbok pivot was handed another opportunity, but this time his effort was awry off the tee.

It was to prove costly as the visitors failed to garner the points their dominance deserved. Even when New Zealand are playing poorly, they are always dangerous off turnover ball and one moment of quality was the away team’s undoing.

South Africa knocked on in the midfield and the space opened up out wide for Barrett to scamper down the right. Goodhue was on his shoulder and, after receiving a pass from the full-back, the centre crossed the whitewash unopposed for a one-point advantage at the break.

Buoyed by that score, the All Blacks displayed much more composure at the start of the second half and extended their lead via Barrett’s three-pointer.

Erasmus’ men were now the side making the needless errors, but they were kept in the game by the errant boot of New Zealand’s kicker, who missed his second penalty attempt.

Following that miss, the visitors responded when Pollard kicked another three-pointer – a minute after Brodie Retallick had sustained a nasty-looking shoulder injury – but Mo’unga immediately restored the four-point gap.

It meant a tense final 10 minutes but the All Blacks seemed to take control through a second penalty from their fly-half.

However, South Africa produced a fine move in the final minute as Cheslin Kolbe raced down the right and chipped ahead. Jantjies was in support and, although he received a bit of luck by not knocking on under pressure from Aaron Smith, the youngster collected and touched down.

The scrum-half should have taken it closer to the uprights in preparation for the conversion but it did not matter as Pollard added the extras to dramatically tie the game at the death. 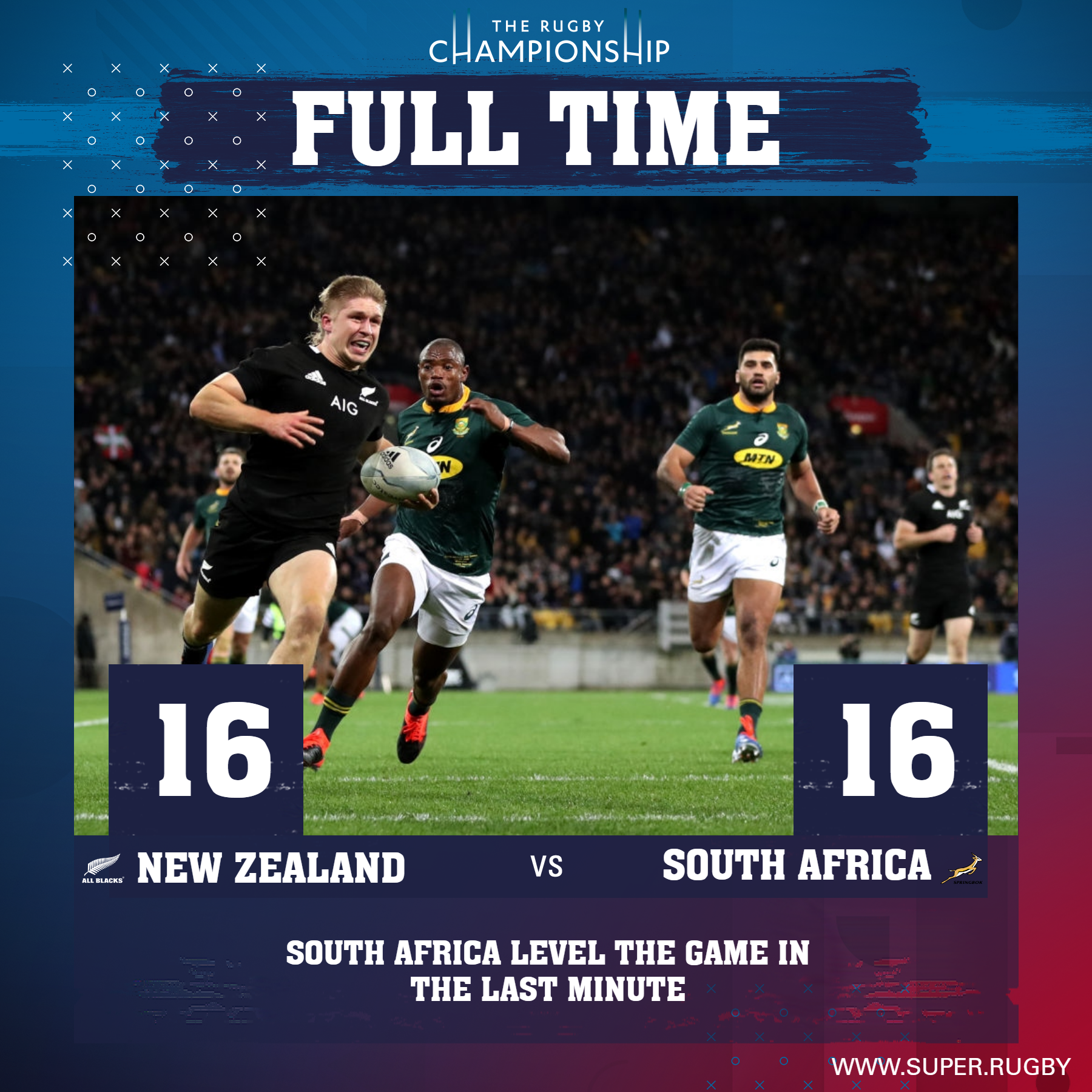