The Springboks enjoyed a solid win over hosts Japan while the Pumas had a run against Sydney club side Randwick as they wrapped up Rugby World Cup preparations.

Rassie Erasmus was a satisfied man after his team successfully dodged a potential booby-trap with a solid victory over Japan at the Kumagaya Rugby Stadium - by winning 41-7 it went some way to erase the ghosts of RWC 2015.

The Springboks’ seven try to one victory completed the team’s pre-Rugby World Cup preparations and restored some historic order in the wake of Japan’s famous 34-32 victory at the 2015 Rugby World Cup.

“There are some tired players in the change room and some tired bodies but we haven’t got a lot of injuries and it has put us on the right track for the Rugby World Cup,” said Erasmus.

“Japan pushed us hard right to the end. At halftime we were leading 14-0 or 22-0 or something but they scored that try after Frans Steyn had that pass go loose and that gave them hope. They are a dangerous team and really challenged us.

“I really believe that if we progress from our pool there’s a chance we may meet them again.

“But the game went pretty much as we wanted it to. We put up a lot of contestable kicks because they have not faced that much and we wanted to see how they handled that.

“We scored four of our seven tries from contestable kick turnover so we’re happy how that turned out.

“Having said that, I think the scoreboard was flattering to us today.”

Erasmus also said how much his team was enjoying their Japanese experience.

“I haven’t experienced the way the crowd respected the game – the way they applauded good play from both sides and when the replacements came on and were quiet for the kickers - it’s not something we’ve experienced before.

“And I don’t get upset if they ask us about 2015; Japan should be proud of that result but it’s why we wanted to win this match and now we hopefully we see them in the play offs if we progress.”

Siya Kolisi was asked what impact the appointment of Erasmus had had on the team.

“The one thing that he brought back to us is that the Springboks are bigger than our personal goals and that if we work as hard as we can for each other we will be successful.” 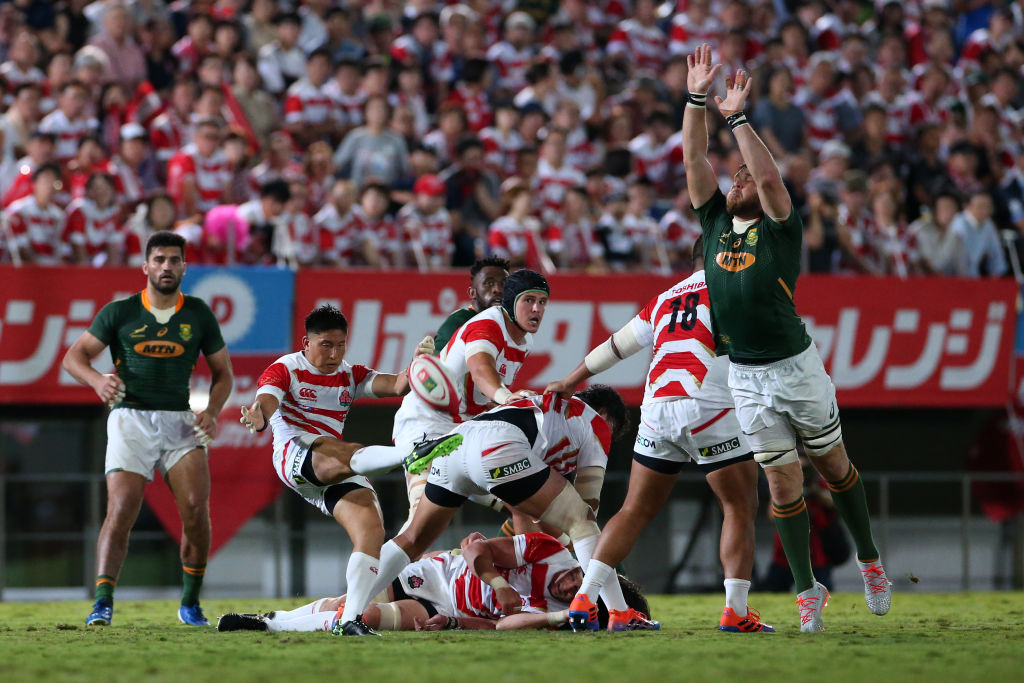 It won’t be remembered as fondly as the clash against the All Blacks in 1988, but Randwick’s loss to Argentina at a packed Coogee Oval on Saturday demonstrated that passion for rugby remains strong in Sydney.

The Pumas won 74-0, dual-code star Andrew Walker bid adieu to competitive footy, and a sellout crowd of 5000, as well as many perched on nearby balconies, rooftops and even exercise cycles at the upstairs gymnasium across the road applauded the return of a Test team to a suburban ground.

Argentina tuned up for their World Cup campaign — they’re pooled with northern heavyweights England and France — with a ruthless demolition of a young Randwick side featuring emerging stars Short, Will Harrison, Jeral Skelton, Josh Gordon and Christian Poidevin.

Argentina scored five first-half tries to lead 33-0 at the break, however it took them 18 minutes to get on the board.

A game young Randwick side began with desperate intent in defence and pulled off commendable tackles on their line in the first quarter.

But the Pumas began wearing down their resistance, and scored their first try through Cubelli after No. 8 Tomas Lezana broke powerfully from a scrum and offloaded to the halfback.

Four minutes later Argentina had another, when hooker Julian Montoya crashed through from a lineout drive.

Veteran Juan Manuel Liguizamon was next to score after a Montoya delivered a smart offload to the backrower who twisted through three Greens defenders.

The home crowd rose in voice when Randwick winger Josh Gordon burst through the defence from his own quarter, but the attacking raid was turned over midfield and Argentina orchestrated a clever counter-attack that led to a try by open side flanker Marcos Kremer.

As the halftime siren sounded, Wicks five-eighth Ben Donaldson attempted a chip over the defence that was snapped up by the Pumas, and a quick spread allowed winger Santiago Carreras to score in the corner.

Pumas veteran Agustin Creevy set up one try and scored another late in the match.