The Wallabies and All Blacks teams have been named for the Bledisloe Cup 3 clash in Tokyo.

Folau to centre with Naivalu to start on the wing

Reece Hodge’s ankle injury has forced a reshuffle to the Wallabies backline with Folau shifting to the number 13 jersey and Sefa Naivalu named on the wing for his first Test since playing Italy at Suncorp Stadium in June last year.

Naivalu will be looking to add to his remarkable strike rate in the Gold jersey, with four tries in seven Tests despite featuring predominantly off the bench.

Rob Simmons will start at lock alongside Izack Rodda after groin soreness forced Adam Coleman to sit out the final Bledisloe Cup Test of 2018.

Veteran Sekope Kepu is in line to play his 100th Test after being named amongst the reserves and will become the first prop in Wallabies Test history (and 9th Wallaby overall) to reach the century mark, should he run on at Yokohama Stadium on Saturday.

Kepu is joined on the bench by backrower Jack Dempsey, who hasn’t featured at Test level since the third Bledisloe Cup fixture last year because of a hamstring injury.

Dempsey was man-of-the-match in a memorable display against New Zealand, when Australia snuck home 23-18 in front of a packed house at Suncorp Stadium last October.

Samu Kerevi is also set to make his Test return after nearly four months out with a biceps injury suffered in the final game against Ireland at Allianz Stadium in June. 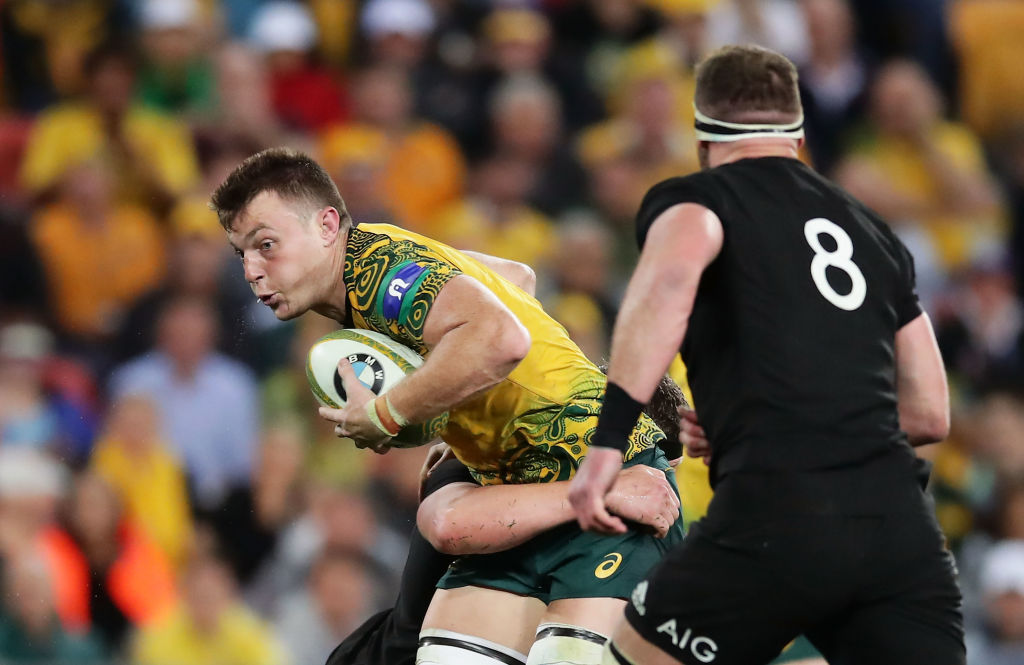 Midfielder Sonny Bill Williams has been named to play in his 50th Test, a special milestone in a career which started in November 2010 when Williams made his Test debut against England.

The squad also features the return of several key players from injury. Joe Moody returns from his thumb injury and back into the number one jersey, while fellow prop Nepo Laulala is also back, named in the run on reserves. Liam Squire returns to the number six jersey while Brodie Retallick will make his return via the bench.

In other changes from the last Test side, TJ Perenara will start at halfback with Aaron Smith providing impact from the bench. Ben Smith moves to the right wing to make way for Damian McKenzie at fullback.  Matt Todd provides loose forward cover from the bench.

All Blacks Head Coach Steve Hansen said this weekend's Test in front of a passionate rugby crowd in Yokohama was the perfect way for the All Blacks to kick off their Vista Northern Tour.

"We'll be up against a good Australian team and they'll be desperate to win, but so are we. We know that they'll come with a lot of passion and physicality, but our focus this week has been about us and what we want to bring - intensity, skill and a triple threat game.

"Being well prepared, clear in our roles and excited about the opportunity in playing this one-off Test against Australia in Japan, will be a good start in achieving a quality performance."

Hansen added: "It's great to have Joe, Nepo, Liam and Brodie, as well as Matt Todd, back.  As well as being world-class rugby players, they also add a lot of experience to the team, both on and off the track. We look forward to seeing them play again.

"The Test match will provide us with another great opportunity to put into practise what we have learnt throughout our recent Tests in the Rugby Championship, and grow our game in the first Test of what will be an exciting Vista Northern Tour.

"We're also excited to be playing the first of our two Tests here in Japan.  The Japanese people have been fantastic hosts and the team has enjoyed the cultural aspects of our time here. We look forward to seeing them on Saturday and hopefully having their support."

* The All Blacks have scored 52 tries so far this year, the most by any top tier country, and have scored the most tries every calendar year since 2010.