The Stats Behind The All Blacks

The All Blacks again lead the way in this year's Rugby Championship and their success is backed up by impressive figures that show they lead the way in most game statistics.

The plaudits and praise for the All Blacks is as insatiable as their own desire to win every game they play. Having already swept aside the Wallabies with aplomb they overcame a resilient and impressive Argentinean side in Round 3 and will now be looking to inflict the same ruthlessness against South Africa as they visit Westpac Stadium this weekend.

The Springboks have lost eight consecutive games away from home against the All Blacks and have lost on all six visits to this venue in Wellington, with all the signs suggesting these losing runs will continue.

Looking solely at the All Blacks and they have absolutely dominated the statistical rankings this season, topping the charts for average points, tries, carries, metres, breaks, defenders beaten, passes, tackle %, lineout % and scrum %. The only areas you could look at for improvement if you were a miserly coach would be their goal kicking and possibly their turnover rate. 19 turnovers per game is three more than any other side, however the All Blacks are probably the one side in the world that can get away with that, needing just scraps sometimes to be able to conjure up the required possession to get over the try line. 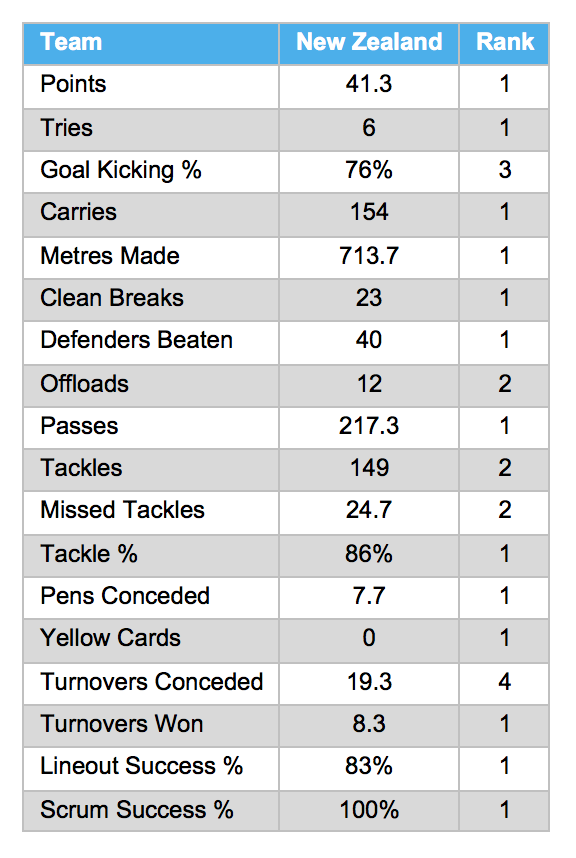 Comparisons will always be made to previous great sides in Test rugby, with most of those being former All Blacks squads, and it is almost impossible to compare eras, but undoubtedly the current crop is as dominant as any has been in the professional era. This weekend they will be aiming to become the first side in the history of the Tri Nations/Rugby Championship to score 40+ points in three consecutive games, they’ve done it three times in back-to-back games but never three games. Their consistency in producing emphatic attacking rugby is relentless, but can they keep it going through the tournament, or will a wounded Springboks side be able to produce the shock of the competition so far?