Its down to the wire for the Wallabies against Ireland while the All Blacks and Springboks are chasing whitewash victories.

For the All Blacks the key feature is the selection of new All Blacks Shannon Frizell in the number six jersey and Jackson Hemopo on the bench.

The tight five is unchanged, with Samuel Whitelock again named as captain.

In other forward changes, Ardie Savea gets his fourth start in the number seven jersey, while Matt Todd will provide additional impact off the bench. Liam Coltman, who made his Test debut in 2016, comes in as the reserve hooker, while Karl Tu'inukuafe and Ofa Tuungafasi will again provide front row power from the bench.

In the backs, Damian McKenzie gets his first Test start in the number 10 jersey outside halfback Aaron Smith. Midfielder Jack Goodhue, who played against the France XV on last year's Northern Tour, will make his Test debut at centre, outside Sonny Bill Williams, who has made a remarkable return from injury.  The back three have been reshuffled, with Waisake Naholo coming in on the right wing, Ben Smith at fullback and Rieko Ioane on the left wing.

TJ Perenara is reserve halfback, Richie Mo'unga, who also played the non-Test against the France XV last year, looks set to make his Test debut off the bench, while Jordie Barrett is the other back reserve.

All Blacks Head Coach Steve Hansen said: "One of the aims of the Steinlager Series was to continue to build depth across our squad and give players opportunities. Now that we have secured the Dave Gallaher trophy and won the Series, we think this is the right time to do that.  It's an exciting mix of players with big-match experience, newer All Blacks who are continuing to grow their game, and four players who have been named in the Test 23 for the first time. On behalf of the All Blacks, I want to congratulate Shannon, Jackson, Jack and Richie, on their selection in the Test side.

"Our focus this week has been concentrating, firstly, on getting our individual processes done well, and then working on these collectively as a team.  Another key focus has been our mental preparation, which needs to be bone deep and genuine.

"The French have proven to be a worthy opponent and very difficult to play, and we see this Test as another opportunity to improve our game.

"Once again we are looking forward to playing under the roof at Forsyth Barr Stadium in guaranteed good conditions."

Tui and Phipps in for Wallabies decider

Qantas Wallabies coach Michael Cheika has made two changes to his starting side ahead of the Mitsubishi Estate Ireland Series decider, to be played in front of a sold-out Allianz Stadium in Sydney.

David Pocock shifts to number 8 to make way for Lukhan Tui at blindside flanker while Nick Phipps will start in the number nine jersey after Will Genia suffered a fractured arm in game two.

Saturday night’s Test will be Tui’s first start in Wallaby gold, having appeared off the bench in his previous six Internationals.

Phipps brings plenty of Test experience and will lean on his Waratahs backline combination with Bernard Foley, Kurtley Beale and Israel Folau.

Fellow scrumhalf Joe Powell will aim to add to his three Test caps after being named on a six-two bench along with 2017 Wallabies Rookie of the Year, Ned Hanigan who makes his return from injury.

Australia and Ireland last faced off in Sydney back in 1994, when the Wallabies won 32-18 at the Sydney Cricket Ground. 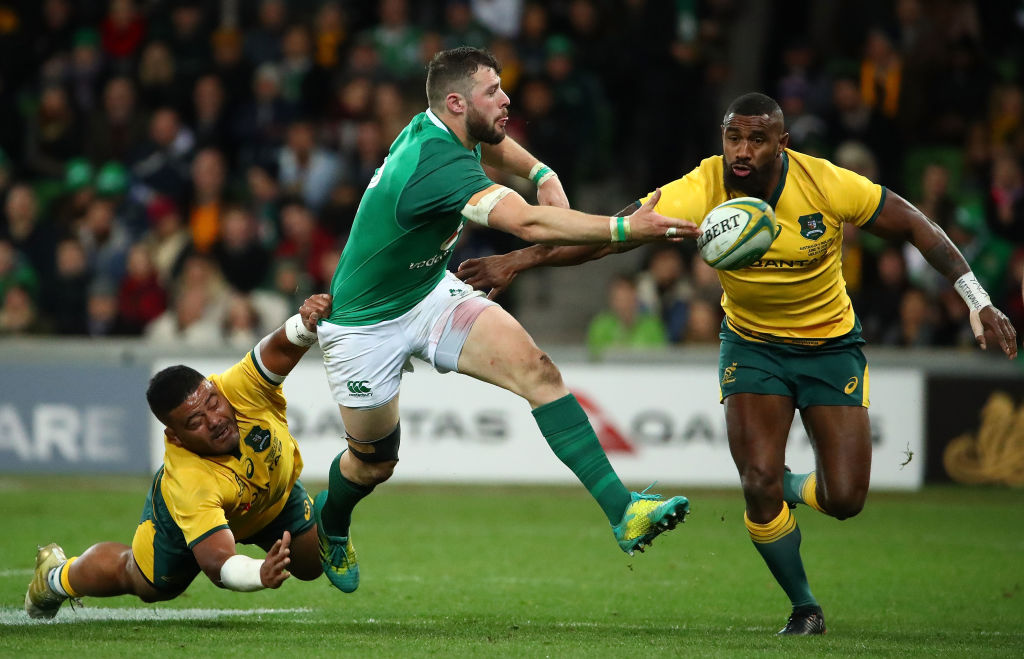 The Springbok team for the third and final Test in the Castle Lager Incoming Series against England in Cape Town on Saturday, shows five changes from the starting team that beat the English last week in Bloemfontein.

Rassie Erasmus, the SA Rugby Director of Rugby, has picked Warrick Gelant at fullback, Jesse Kriel and Andre Esterhuizen in midfield, Elton Jantjies at flyhalf and Chiliboy Ralepelle at hooker for the match at DHL Newlands, which kicks off at 17h05.

The 37-year-old Schalk Brits (hooker) is on the replacements bench and is set to make his first Springbok appearance since the 2015 Rugby World Cup. The promising young scrumhalf Embrose Papier, who made his Springbok debut off the bench against Wales in Washington, was also named amongst the substitutions.

The Springboks have already clinched the three-match series between the two countries following last Saturday’s 23-12 victory in Bloemfontein, where front rower Tendai Mtawarira made his 100th Springbok Test appearance.

Mtawarira will again anchor the Bok scrum, this time with Ralepelle doing duty in the No 2 jersey, while Frans Malherbe gets a second successive start following last week’s return to the Bok tight five.

Erasmus has resisted the temptation of make wholesale changes and has instead opted for a couple of tweaks in areas where he wants to try different combinations.

“The series might be won but we still have an important Test match on Saturday, against a very determined English side who will be looking to end the series on a high,” explained Erasmus.

Referring to the changes in the match 23, Erasmus said: “No one is out of the team because of a lack of form, the changes are due to our long term planning for next year’s Rugby World Cup as we continue to build squad depth and capacity.”

While praising the strides made in the past two matches in Johannesburg and Bloemfontein, Erasmus said he wants to see much more improvement from the Springboks.