Thriller in Wellington Ends In Draw

The Wallabies surprised the All Blacks in the opening Test of 2020 in wet Wellington as visitors see winning penalty from 60 meters hit the post.

The Qantas Wallabies and New Zealand have played out a classic at Sky Stadium in Wellington with both sides playing themselves to standstill in a memorable 16-all draw.

The clock almost ticked over 90 minutes as the Wallabies and New Zealand went end-to-end in a heart-stopping final passage of play but both eventually had to share the honours in a pulsating Bledisloe Cup opener.

In wet and windy conditions in Wellington, the Wallabies dominated possession and territory in the opening half before All Blacks winger Jordie Barrett stung Australia on counter attack.

Barrett added another three points moments later as Australia’s lineout struggled in the blustery conditions and under intense All Blacks pressure.

The Wallabies forced their way back into the contest though, to narrow the margin to five points thanks to a penalty from James O’Connor, and that’s where the margin stayed at the half-time interval.

It was a titanic second-half with New Zealand scrumhalf Aaron Smith earning the first five points following a set-piece play off an All Blacks lineout before the Wallabies responded with a special of their own.

Australia took the ball off the top of the lineout before passing it through the hands to the left wing before an acrobatic Marika Koroibete finish in the corner pulled the Wallabies back into the contest.

Filipo Daugunu then stole a Test try on debut after a brilliant flick pass from Australia scrumhalf Nic White, to bring the sides level with 18 minutes left to play.

As the rain started to fall in Wellington, the Wallabies gradually earned field position and with seven minutes left, James O’Connor stepped up to put Australia in front by three points.

Jordie Barrett then pulled New Zealand level with just two minutes remaining and that’s where it stayed despite almost 10 minutes of play after the final siren.

The two sides now move north to Eden Park in Auckland for the second Bledisloe Cup Test on Sunday 18 October. 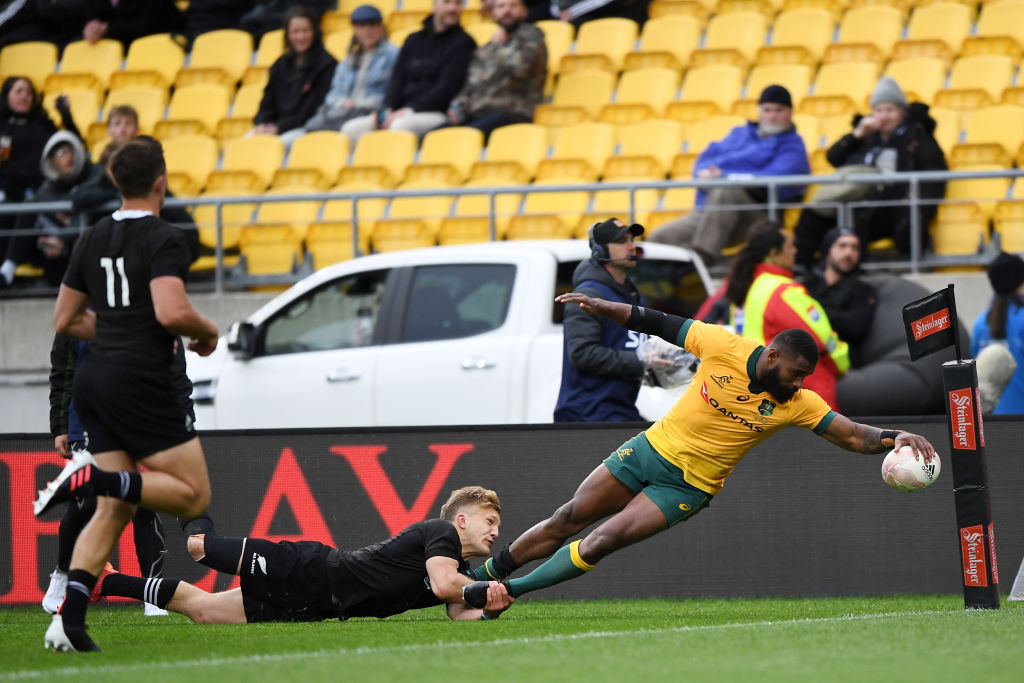 Wallaby wing Koroibete scored in corner in second-half in Wellington