In an epic battle the All Blacks gain revenge for round one loss to get campaign back on track.

The All Blacks scored early and late in their second Castle Lager Rugby Championship Test against the Springboks in Johannesburg on Saturday to set up a 35-23 victory over the home side. Leading 15-0 after 30 minutes, New Zealand were overhauled by the Boks with less than 15 minutes to play when SA held a 23-21 lead, but that was snuffed out by two late tries by the visitors.

The men in black had much more possession than last week in Nelspruit and used it wisely, with their dangerous backs a continuous threat in the match. They also did 100 times better in the aerial battle and could actually claim bragging rights in that department.

The Boks did not dominate the air like a week ago, mainly due to more indifferent kicking, but also better play in the air by the visitors' back three.

The first half was as intense as predicted and New Zealand were showing real intent in everything they did from the start. The Springboks, on the other hand, were not their usual self, losing their first lineout, conceding a penalty at the first scrum and in some frantic defence, losing Damian Willemse to the sin bin when he did not release the tackler close to the Bok tryline.

To add to their woes, Jesse Kriel had to leave the field after he tried to tackle Caleb Clarke, with the winger's high knee action leaving a Springbok defender dazed for a second week in a row.

The New Zealanders had real intent in their attack, none more so than Clarke, who after a couple of wild passes early on, was finally put in space by his inside backs. He continued to threaten with ball in hand, but good Bok scrambling defence kept the All Blacks in check.

Lukhanyo Am then almost scored against the grain of momentum. Pieter-Steph du Toit found a gap and ran hard and far before being overhauled by the New Zealand cover defence. He popped the ball inside and Am was stopped on the line and held up, which meant the All Blacks could escape with a goal-line drop out.

After trying twice to force a try through the driving maul, the visitors took the lead 25 minutes in when Richie Mo'unga opted for the safer points option after the Boks were penalised withing range.

Barely two minutes later, Clarke broke through and this time a try was the reward, but it was not scored by the wing. He was stopped but from the resulting play and good distribution by the men in black, captain Sam Cane was left unguarded on the left flank and scored in the corner.

The conversion went wide, but suddenly the All Blacks found some momentum and grabbed the game by the scruff of the neck by scoring a second try in the 32nd minute. They attacked well with Ardie Savea prominent, but in the end Samisoni Taukei'aho barged over. Mo'unga converted for a 15-0 lead.

The Boks needed something special to happen and it come in a wonderful moment when Am danced his way around a number of would-be tacklers.

They called Malcolm Marx onto the field after 30 minutes and made two more changes soon after with Steven Kitshoff and Jasper Wiese replacing Ox Nche and Duane Vermeulen respectively, and the duo had immediate impact.

The Boks mauled brilliantly as they arrived and when the ball was sent wide, Le Roux glided a pass to Am, now on the wing, who seemed cornered. Not so for the Bok blitz, who bamboozled the first, then second and ultimately a third tackler before he reached over the line for a brilliant five pointer.

Handre Pollard kicked a touchline conversion and added a long-range penalty from 55 meters on the hooter to cut the All Blacks' lead back to five points at the break. 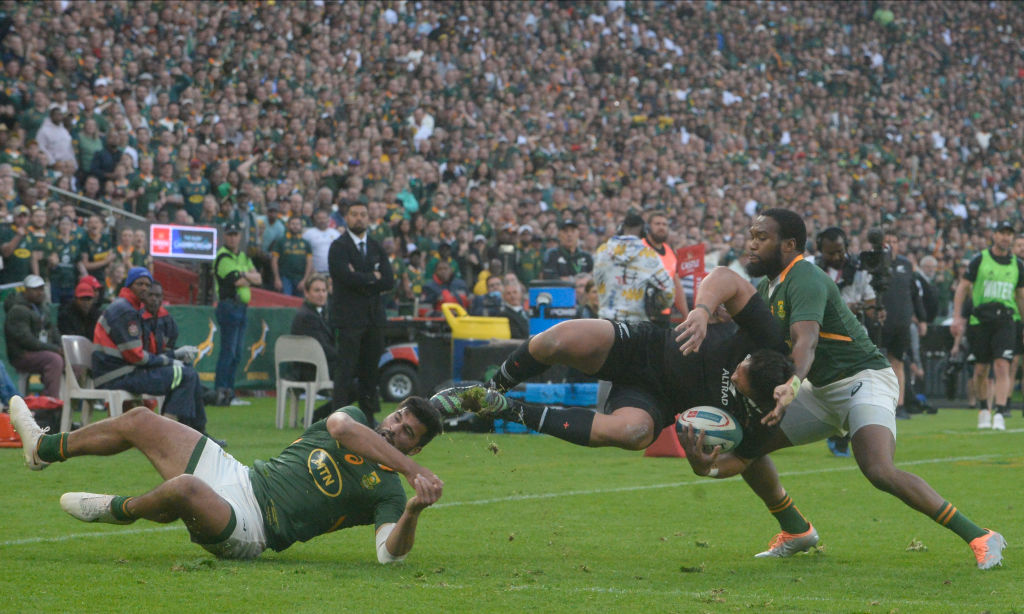 The second half started much better for the Springboks. An early maul set up some attacking phases and when the All Blacks were penalised for offside play, Pollard kicked a second penalty goal to cut the lead to two points (13-15).

Wiese was then penalised for a late charge, which came as referee Luke Pearce blew his whistle, to turn around the penalty against the Boks. Mo'unga was not going to miss this on any given day and the lead was back to five with 30 minutes to play.

The Boks twice kicked for the corner and on the first occasion, Am was tackled into touch meters out, on the second the All Blacks were penalised for collapsing the maul. A third lineout was forced and this time around the Boks went wide. They came close, but turned the ball over and it was an opportunity lost.

The Boks thought they scored via Mapimpi when Am broke through, but the match officials spotted some blocking by Jaden Hendrikse. The play was called all the way back to the original infringement, again within range of Mo’unga, and instead of a Bok lead, the All Blacks were up by eight again.

From the restart though, sanity was restored when Mapimpi scored. Marx made a brilliant turnover from the kick-off and Willemse threw a beauty out wide to the left wing who was not going to be denied again. Pollard’s conversion from the touchline was sweet as sugar and suddenly the lead was cut to one, 21-20.

The Boks took the lead for the first time (23-21) in the match after 67 minutes when Beauden Barrett impeded Hendrikse, who was chasing a kick-through and Pollard slotted from close range.

The All Blacks were not done though and with six minutes left it was David Havili who silenced the 61,519-strong crowd. Fellow midfielder Rieko Ioane made a great break and from that the Boks defence was reeling, with Havili finishing off some good interplay.

Mo’unga’s conversion was good and the lead back in black (28-23) with four minutes to play.

The Boks could still grab the win with a try, but a last burst by New Zealand proved decisive though as they forced their way over from a lineout close out, with Scott Barrett dotting down for the fourth try which sealed the victory for the visitors, and ensured they retain the Freedom Cup.