Springbok coach Jacques Nienaber has handed Warrick Gelant a start on the right wing and recalled scrumhalf Faf de Klerk in the only two changes to his starting team for their Castle Lager Rugby Championship tour match against Australia in Adelaide on Saturday.

Gelant takes over from Jesse Kriel on the wing, while De Klerk has completed his return to play protocol after missing the second Test against New Zealand due to concussion and slots in for Jaden Hendrikse.

Nienaber also made three changes to the replacements bench, which features a split of five forwards and three backs, where Hendrikse takes over from Herschel Jantjies, while Elton Jantjies will provide flyhalf cover and Frans Steyn additional cover at the back. Willie le Roux and Jasper Wiese are not in the match-23 this weekend.

“This is a very important clash for us to set the tone for our Castle Lager Rugby Championship tour and we feel that continuity in selection is important to build momentum in our campaign,” said Nienaber.

“Warrick was in good form for the DHL Stormers earlier this season and he has been working hard at training, so we thought it would be good to give him a run on the wing. He also combined well with Damian Willemse in the Vodacom United Rugby Championship, so we are excited to see what they offer us in the match.

“Faf, meanwhile, is back from concussion and his experience will be important in this game.

“We also feel it is important to give the likes of Ox (Nche), Joseph (Dweba) and Duane (Vermeulen) another opportunity to further build combinations and give them valuable game time as we build toward the Rugby World Cup next year.”

Of the decision to switch from a six-two to a five-three split on the bench, Nienaber said: “We looked at what Australia will bring to the game, and that combined with our need to give Elton and Frans Steyn some vital game time, prompted us to select five forwards and three backs on the bench.

“With Franco (Mostert) and Kwagga (Smith) on the bench, we will have cover at lock and looseforward, while Frans Steyn’s versatility will also be handy as he can cover centre and fullback. These changes obviously mean that Willie, Jasper and Herschel lose out, but we know what we have in them and what they bring to the team.”

Nienaber expected a big onslaught from the Wallabies who will be equally determined to bounce back from their defeat against Argentina and said: “Australia are always a tough force at home and the fact that we haven’t beaten them here since 2013 is evidence of that.

“Much like us, they will also want to bounce back after going down against Argentina, so we expect them to come out firing. The fact that this will be the first Test between the teams in Adelaide will serve as extra motivation for both teams this weekend, so we are preparing for another epic encounter against them.”

Nienaber added: “We had a thorough review of our last match against New Zealand, and we have identified the areas of our game in which we need improve. We know we need to make a big step-up in the quality of our performance to start the tour on a positive note, and that is a big objective for us this weekend.” 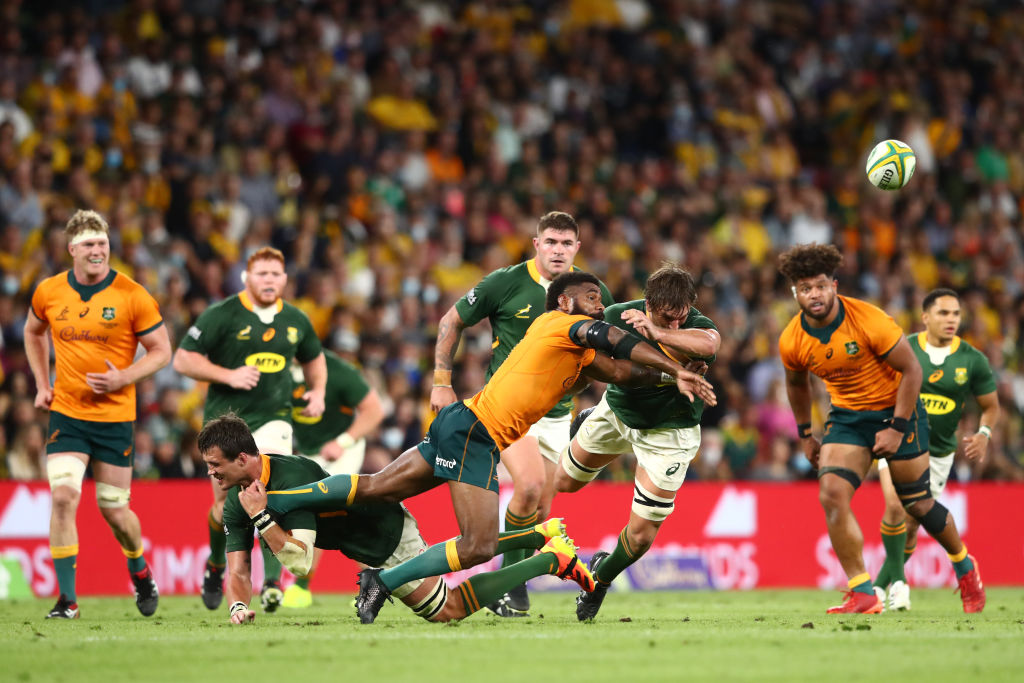 In their last encounter the Wallabies beat the Springboks 30-17  in Brisbane last year.

Wallabies coach Dave Rennie has made six changes to the starting XV ahead of Saturday afternoon's clash with South Africa at the iconic Adelaide Oval, in what will be the first Test to be played in the South Australian capital since 2004.

The two sides will square off for the Mandela Challenge Plate, with the Test also featuring as part of a double-header with the Wallaroos taking on the Black Ferns in the earlier game.

57-Test capped Reece Hodge returns to the starting line-up at fullback with Tom Wright shifting back to the right wing and Marika Koroibete on the familiar left edge for the match which forms part of the eToro Rugby Championship.

After returning to Australia early from Argentina for a family bereavement, Allan Alaalatoa will start in the front row at tighthead prop alongside hooker Folau Fainga'a and club teammate James Slipper who plays his 120th Test.   Slipper will also continue to captain the side this weekend.

Rebels stalwart Matt Philip's experience has been called upon, named in the run-on second row pairing alongside Rory Arnold who made his first appearance in the gold jersey this year, in the side's last outing in San Juan.

The backrow remains unchanged for the third consecutive week with Jed Holloway continuing his impressive start to his Test career at blindside flanker. He'll combine with Fraser McReight who is selected at openside flanker and Rob Valetini who will wear the number eight jersey for the 16th consecutive Test.

The experienced Nic White will again be the starting scrumhalf, partnering Brumbies teammate Noah Lolesio who will play his first Test against the Springboks on Saturday afternoon.

Queensland inside centre Hunter Paisami is another who returns to the starting team, reigniting his midfield combination with the fleet-footed Len Ikitau who will wear the number 13 jersey.

Rennie has opted for a 6-2 split, with Waratahs hooker David Porecki also recalled after overcoming injury to be named as the finishing rake, with the experienced duo of Scott Sio and Taniela Tupou the other replacement front rowers.

Darcy Swain will be called upon as the lock cover, with Melbourne-born duo Rob Leota and Pete Samu the other forward replacements.

Reds skipper Tate McDermott will be asked to bring energy as the finishing scrumhalf while Andrew Kellaway has recovered from injury to round out the match day 23, in what will be his first Test since the Wallabies defeated England in Perth in July.

Wallabies coach Dave Rennie said: “It's great to have a number of experienced players back in the mix this weekend."

"We understand that respect is earned daily and we get an opportunity to earn it against the current World Champions on Saturday afternoon.

"It's really motivating to be back at home in front of our supporters, especially in Adelaide, a place we haven't played at in 18 years."