South Africa rings the changes for Sydney Test while the Wallabies remain unchanged.

Talented young utility back Canan Moodie will make his Springbok debut against Australia in Sydney in The Rugby Championship as injuries and the desire to try a few new player combinations sees head coach Jacques Nienaber include eight new players in the starting team.

Handre Pollard, Lukhanyo Am and Pieter-Steph du Toit were all ruled out due to knee injuries, while Elton Jantjies injured his hand and was not available for selection this weekend, which means Damian Willemse [pictured below] will move from fullback to flyhalf, Jesse Kriel will slot in at centre, and Franco Mostert has been included in the loose trio.

The 19-year-old Moodie earns his first start on the right wing in a positional switch with Warrick Gelant, who has been named among the replacements, while the experienced Willie le Roux will take Willemse’s place at fullback, with the other change in the backline at scrumhalf, where Jaden Hendrikse takes over from Faf de Klerk.

Apart from Mostert’s inclusion among the forwards, prop Steven Kitshoff and hooker Malcolm Marx earn starts in a new-look front row with Frans Malherbe, while Jasper Wiese takes over at No 8 from Duane Vermeulen, who will provide an impact off the replacements bench.

These changes see a reshuffle of the front row on the bench, with Deon Fourie serving as the replacement hooker, and Ox Nche and Trevor Nyakane providing cover at prop.

Among the backs, Cobus Reinach will serve as back-up for Hendrikse at scrumhalf, with Frans Steyn providing cover flyhalf and centre, while Gelant will offer options on the wing and fullback.

“We selected a team we thought would be best for this match given that we have several players out with injuries and with an eye on how we want to play,” said Nienaber.

“Handre, Lukhanyo, Elton and Pieter-Steph are all carrying injuries which adds to a list that includes Cheslin Kolbe and Sbu Nkosi, while Kurt-Lee Arendse is also out serving a suspension, and this has forced our hand to make a few changes in some positions.

“With both flyhalves injured, Damian was the natural choice at No 10 where he has slotted in for us a lot. He is also becoming a settled player in our team with over 20 Test caps to his name.

“This will also be a great test for Canan, who was a stand-out player for the Vodacom Bulls this season in the Vodacom United Rugby Championship. He’s a very talented player, who will enjoy this opportunity.”

Nienaber added: “Cobus at his best is world class and having seen what he offers us at training we think he’s close to that form. With him, Warrick and Frans Steyn on the bench we have sufficient cover among the backs.”

Commenting on the changes among the forwards Nienaber said: “With Bongi (Mbonambi) and Trevor injured in the last few weeks we were in a position where we could test other combinations and we got some good answers in that regard.

“This weekend we opted to make a few switches with Ox and Trevor playing off the bench along with Deon Fourie. With Bongi and Malcolm both settled with over 50 Test caps each, it was always our plan to give Joseph (Dweba) and Deon a chance at hooker, and this week Deon gets a run.”

Zoning in on the match itself, Nienaber said: “We had a thorough review of our performance against Australia last week, and the most disappointing aspect is that were dominant in several areas of the game, but we struggled to show that on the scoreboard.

“This week is a final for us to stay in the competition and we are expecting Australia to be just as desperate, but so are we.

“We let ourselves down in the last two games and we are determined to rectify that this week and change our fortunes in Australia. We’ll prepare as well as possible this week to stay in the hunt for the title,” he added. 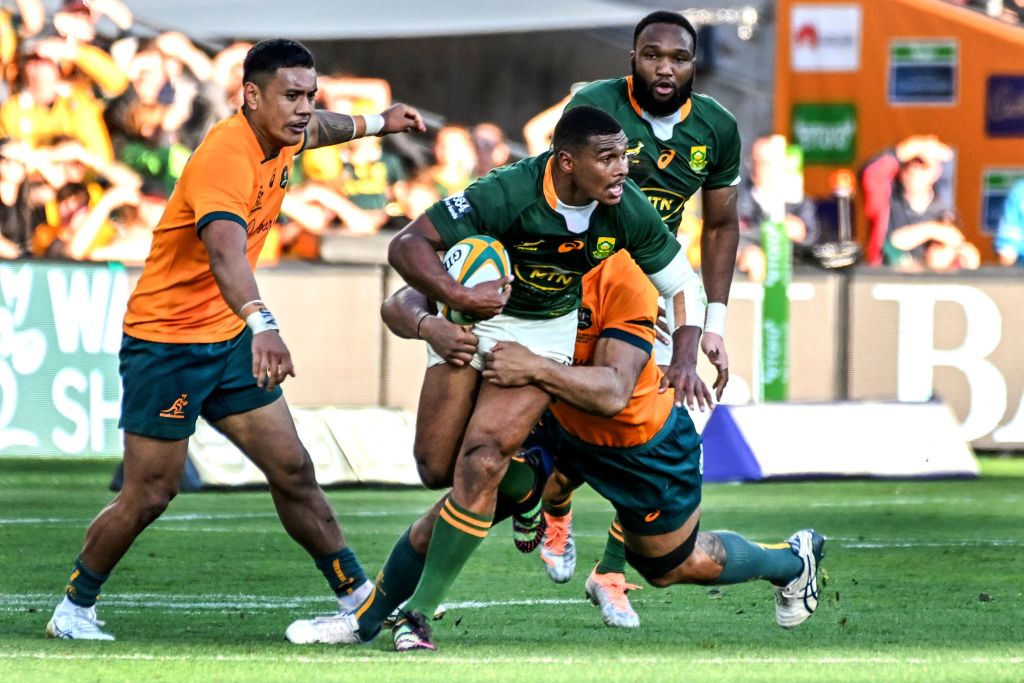 Wallabies coach Dave Rennie has named an unchanged starting XV for the first time in his International coaching career, ahead of the Test against South Africa in Sydney.

The eToro Rugby Championship clash will be the first International event held at the brand new, state-of-the-art venue in front of a sold out 42,500 spectators.

James Slipper will captain the side at loosehead prop, playing his 121st Test which equals that of Michael Hooper and former teammate Adam Ashley-Cooper.  He's joined in the front row by long-time ACT Brumbies teammates Folau Fainga'a and Allan Alaalatoa.

The second-row combination of Rory Arnold and Matt Philip will again start for the Wallabies as the team looks to put together back-to-back wins for the first time this year after defeating South Africa 25-17 last Saturday in Adelaide.

Waratahs Player of the Year Jed Holloway will get to wear Wallaby gold for the first time in his home state, lining up at blindside flanker.  Dual try scorer Fraser McReight again starts on the openside with Rob Valetini going strength to strength as the no. 8.

An impressive performance from 22-year-old Noah Lolesio in Adelaide has assured him another start at flyhalf, where he will partner 53-Test halfback Nic White.

The ever-improving midfield pairing of Hunter Paisami and Len Ikitau will get another chance to work on their combination at inside and outside centre respectively.

Reece Hodge had a near flawless game at fullback last weekend and is named again to fill the number 15 jersey with Tom Wright and last week's man of the match Marika Koroibete on the edges.

The bench remains a 6-2 split for the second consecutive week, with David Porecki, Scott Sio and Taniela Tupou the front row reinforcements.

Darcy Swain will cover the second row, with Rob Leota and Pete Samu offering versatility across the remaining forward positions.

Waratahs captain Jake Gordon is the only change to the matchday 23, named as the finishing scrumhalf in his hometown.  The dynamic Andrew Kellaway will also play his first ever Test in Sydney and rounds out the matchday 23.

The team currently sits second on the eToro Rugby Championship ladder at the halfway mark of the competition.

Wallabies coach Dave Rennie said: “It's great to be able to have some consistency in selection with the team that played last week earning the right to wear the jersey again in Sydney."

"While rapt with last week's effort, we’re well aware of the challenge a wounded Springbok poses and the intensity we will require again on Saturday night.

"We're excited by the opportunity to play in front of a sold out crowd in the first International event at the new Allianz Stadium."