The Springboks have muscled their way to a 24-8 victory over the Wallabies at Allianz Stadium.

In front of a sold-out crowd, the Rugby World Cup Champions proved too strong as they recorded a crucial Bonus Point victory.

“It was frustrating, we couldn’t get into the game,” Wallabies coach Dave Rennie said after the match. “Early on, we turned a bit of ball over and it gave them momentum.

“They certainly defended and we struggled to get any continuity – they strangled us pretty well.

“I thought aerially bar one we were strong but again back out of that corner, we struggled.”

The Springboks opened the scoring in the tenth minute as centre Damian de Allende stepped through and scored under the posts.

It went from bad to worse for the Wallabies as lock Matt Philip found himself sent for ten for a professional foul in the build-up to the try.

South Africa continued to hunt for points but some great defence from the hosts repelled their efforts as they looked for back-to-back wins for the first time in 2022.

The hosts’ injury woes continued as Hunter Paisami left the field with a concussion.

The Wallabies opened their account in the 31st minute after Noah Lolesio slotted a penalty goal from right in front.

With the siren fast approaching, teenage debutant Canan Moodie lit the new stadium up, rising over Marika Koroibete and sprinting away to give the Springboks a 12-3 lead at the break [pictured below] 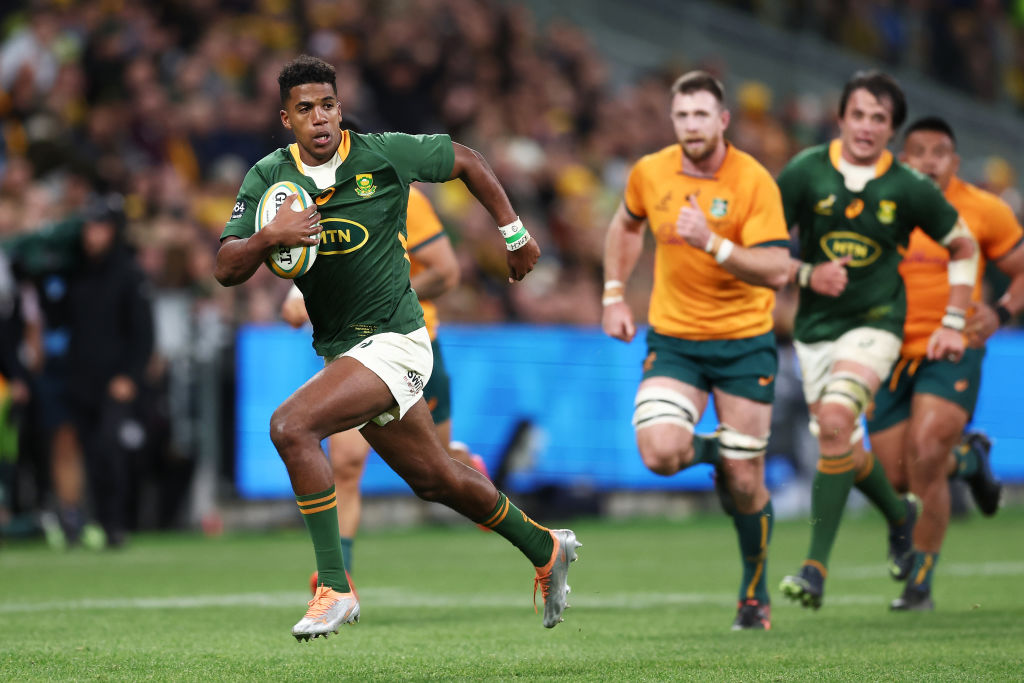 Dave Rennie’s men suffered a further setback with Taniela Tupou appearing to tweak his calf while warming up in the first half.

The World Champions picked up where they left off after the break, with flanker Franco Mostert finishing off some nice interchange between the backs to extend the advantage.

Flyhalf Noah Lolesio followed Paisami up the tunnel with his own HIA, also failing to return.

Neither team could make the most of their attacking opportunities as the game's physical nature took its toll on players.

Makazole Mapimpi sealed the game in the 71st minute as he dived over in the corner after a nice set play.

With Koroibete unable to repeat his heroics from Adelaide, Mapimpi’s overzealous celebrations earned him a yellow card for foul play, however the try stood.

Pete Samu scored a consolation try for the Wallabies as Willie le Roux was yellow carded for the deliberate knockdown.

With every team in The eToro Rugby Championship now having won two matches, the Wallabies will look to stake their claim for the title in their next match, the year’s first Bledisloe Cup clash in Melbourne on Thursday 15th September.