The All Blacks have claimed a 39-37 victory over the Wallabies on the siren at Marvel Stadium in remarkable scenes.

The Wallabies looked to have won the game when Nic White slotted a penalty from halfway in the 77th minute.

However, Bernard Foley was pinged for wasting time with a minute to go, giving the visitors one last chance.

With a penalty advantage, Will Jordan spread it wide and found Jordie Barrett in the corner to seal the Bledisloe Cup.

The All Blacks had taken a 31-13 lead after a double to Samisoni Taukei’aho before an Andrew Kellaway double and Pete Samu try got the Wallabies back into the contest.

White's penalty and Lalakai Foketi's pilfer seemed to have secured a famous victory before Mathieu Raynal's free kick gave the visitors one last chance, which they took with open arms.

Before the smoke could clear at Marvel, the All Blacks were gifted an early opportunity as the hosts failed to take the kick off cleanly.

This allowed Samisoni Taukei’aho to dive over the line from the resulting rolling maul.

A further three points from Richie Mo’unga extend the advantage as the visitors found considerable success with the chip in behind.

Returning flyhalf Bernard Foley reduced the margin with a penalty of his own after a great break from Tom Wright.

This flipped momentum and the Wallabies looked certain to score via Andrew Kellaway, however, he was somehow held up. 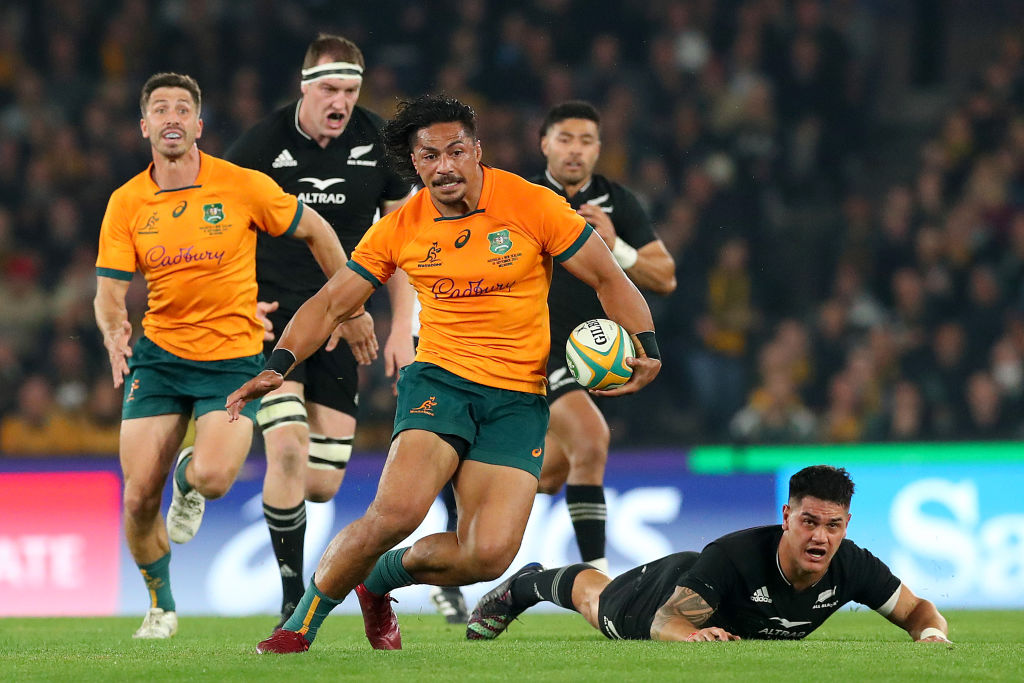 The hosts didn’t have to wait long as Rob Valetini barged his way over the line three minutes later, levelling the scores at 10-all.

A yellow card to Dalton Papali’i proved the perfect platform to attack, with the Kiwis just finding a way to hold on.

This allowed Caleb Clarke to flip the field and change the game in a chaotic period of play.

Clarke burst away, eventually tackled by Tom Wright, whose infringement following the hit saw him receive a yellow card.

His Brumby teammate Darcy Swain followed him off, with the TMO finding a dangerous cleanout in the play.

Looking to expose the numbers advantage, Taukei’aho dived over for an apparent double before an incredible tackle by Jake Gordon dislodged the ball.

As the second half started, the Wallabies couldn’t hold on as Taukei’aho crossed for his second.

Foley’s second penalty of the night reduces the lead but a yellow card to Jake Gordon for deliberate collapsing the maul opened the gates for the visitors to strike.

Richie Mo’unga stepped off the left to score before Will Jordan took a chip kick as the All Blacks scored twice in five minutes.

Needing a spark, Andrew Kellaway and Bernard Foley lit the game up as the flyhalf put the fullback into space to start the comeback.

Another great ball from Foley put Kellaway into space for a double, before some great interchange from Pete Samu and Marika Koroibete saw Samu cross and the Foley conversion tied it up.

White’s penalty looked to have won the game for the Wallabies when Lalakai Foketi earns the penalty at the breakdown.

However, Raynal deemed Foley to have wasted too much time, giving the All Blacks a free kick 5 metres out.

This allowed Jordie Barrett to strike, sealing the win and the Bledisloe Cup.

“Absolutely gutted. I actually don’t know what to say,” captain James Slipper said after the match

“We really wanted to put together a good performance tonight and we just fell short. That’s probably the most gutting way to lose a game."