TRC RD#6: All Blacks Ruthless Against wallabies In Auckland

All Blacks demolish Wallabies meaning Springboks need to score bonus point and win by 39 points to win the title.

Applied All Blacks pressure, delivered with unrelenting intent, overcame an Australian effort that bordered on the desperate, even undisciplined, in the 40–14 win in the Lipovitan-D Rugby Championship at Eden Park.

The win left South Africa with the challenge of not only beating Argentina but overcoming a points differential of 39 points, to deny the All Blacks the Rugby Championship title.

The win extended New Zealand's record to 23 consecutive wins over Australia at the ground since 1986.

Outstanding efforts by the front rowers Tyrell Lomax and Ethan de Groot highlighted the application of the All Blacks pack with locks Brodie Retallick and Sam Whitelock marking their world record-equalling 63rd Test together with huge contributions.

New Zealand was better at the breakdown taking 15 turnovers to six while Australia were forced to make 127 tackles to 112 by the All Blacks, who conceded only 12 penalties to 16 by Australia.

Jordie Barrett made his case for more consideration at second five-eighths in the future with a powerful display that committed the Australian defence time and again.

Wing Will Jordan was elusive, especially in the first half, but limped from the field with a leg injury 67 minutes into the game.

Wing Caleb Clarke was safe in coping with high balls kicked in his area, making the tactic redundant, but still employed.

Two early yellow cards, to lock Jed Holloway and hooker David Porecki, were the last thing Australia needed if they were to vent their frustration from the manner of the Melbourne Test defeat 10 days ago.

Up 17-0 at the turn, the All Blacks struck first in the second half when Whitelock scored beneath the posts. Hooker Codie Taylor was able to score in an All Blacks lineout maul and, when he was replaced by Samisoni Taukei'aho, he marked his revival with another driving maul, with four of the backline joining to power the ball over the line.

Australia had the satisfaction of two tries toward the end. The first, created from a partial chargedown of a clearing kick, and giving replacement hooker Fainga'a Folau the chance to score. And on fulltime, Jordan Petaia got over after an Australian penalty kick to the corner resulted in the play moving to midfield where the chance came after another period of torrid All Blacks defener. 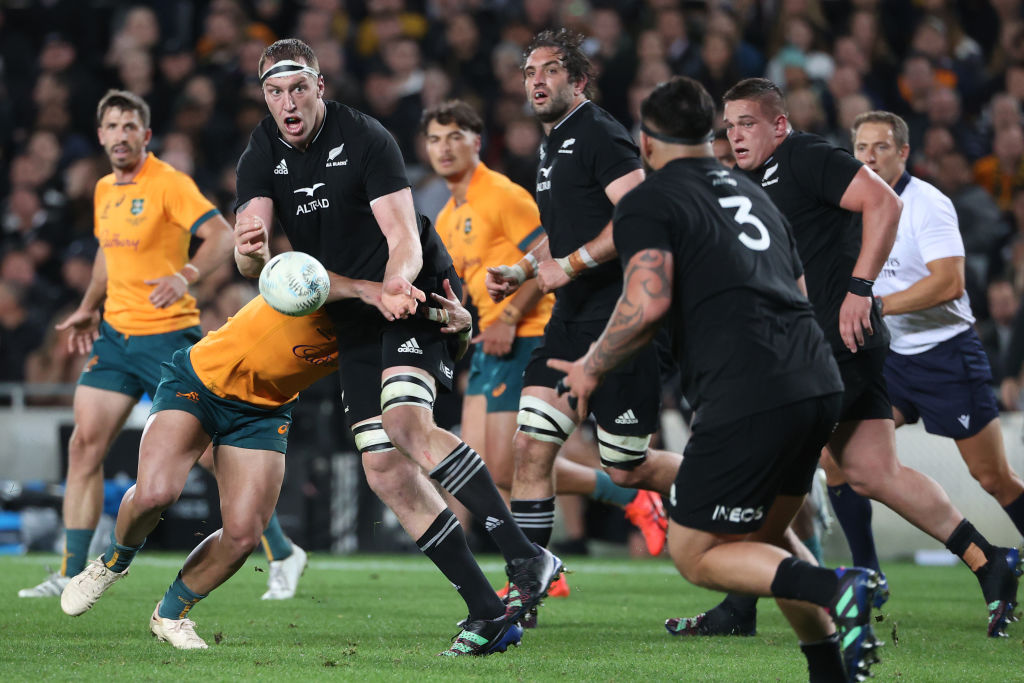 New Zealand were not as efficient as they might have wanted in the first quarter, their inability to take chances costly while also allowing Australia the chance to mount their own challenges. That forced the All Blacks to make 25 per cent more tackles in that quarter.

But once they were able to string their moves together, they played at a tempo that Australia couldn't match. It was that man, Jordan who gave the All Blacks a stunning try, almost from the restart after first five-eighths Richie Mo'ounga opened the scoring with a penalty goal.

With outstanding set-up provided by Jordan in a lineout play and support from flanker Dalton Papali'i, the ball emerged with fullback Beauden Barrett in the line and feeding Jordan who rounded his marker with a superb burst of speed to run in the try.

The Australians infringed and after the All Blacks kicked towards the goal-line they mounted a thrilling driving maul which was taken down by Porecki, resulting in a penalty try, and 10 minutes off the field for the offender.

It was a desperate first half for the Wallabies. They had a try denied when wing Marika Koroibete stepped on the sideline before diving for the line, while on another occasion the ball was held up.

They had plenty of time in the All Blacks' 22m area, and while receiving penalties rather than opting to kick for goal, they attempted tap penalties or kicked to the corner.

None of the tactics brought reward as sterling home defence held them out.

Some of the defence was frightening in its severity. The Australians attempted to batter down the ramparts but they proved solid and, for the first half at least, impenetrable.

It seemed that whatever they tried whether bullocking runs or high kicks to the All Blacks rearguard the home team were up to the task when it mattered.