Both sides have made minimal alterations with only injuries forcing changes on both sides for the Eden Park match.

All Blacks selectors Ian Foster, Joe Schmidt and Jason Ryan have announced the match-day 23 for this week’s Lipovitan-D Rugby Championship Test against Australia at Eden Park in Auckland.

Injuries have forced changes to the All Blacks team that defeated Australia in Melbourne, with captain Sam Cane, Scott Barrett, David Havili and Quinn Tupaea unavailable for selection this week.

Sam Whitelock will lead a side which has welcomed No.8 Ardie Savea back from parental leave. He will take his place in a loose forward trio featuring Dalton Papali’i at openside flanker and Akira Ioane on the blindside.

With Havili and Tupaea out of the midfield selection frame, the All Blacks have retained a key combination that finished the Bledisloe Cup Test in Melbourne. Jordie Barrett will play second-five eighths while brother Beauden will stay at fullback.

The front row sees experienced hooker Codie Taylor selected in the run-on side while Samisoni Taukei’aho will provide cover, alongside props Ofa Tu’ungafasi and Nepo Laulala.

Lock Tupou Vaa’i, midfielder Roger Tuivasa-Sheck and outside back Sevu Reece are the other new faces added to the reserves.

“This year’s Lipovitan-D Rugby Championship is so tightly contested and our group is continuing to make shifts to improve,” said All Blacks head coach Ian Foster. “We are determined to finish the tournament strongly and we know that Australia will throw everything at us. This is what Test match rugby is all about and we can’t wait.

“Saturday’s sold-out double-header at Eden Park is special for our two national teams. We are right in behind the Black Ferns as they take on Japan and we all wish them well.” 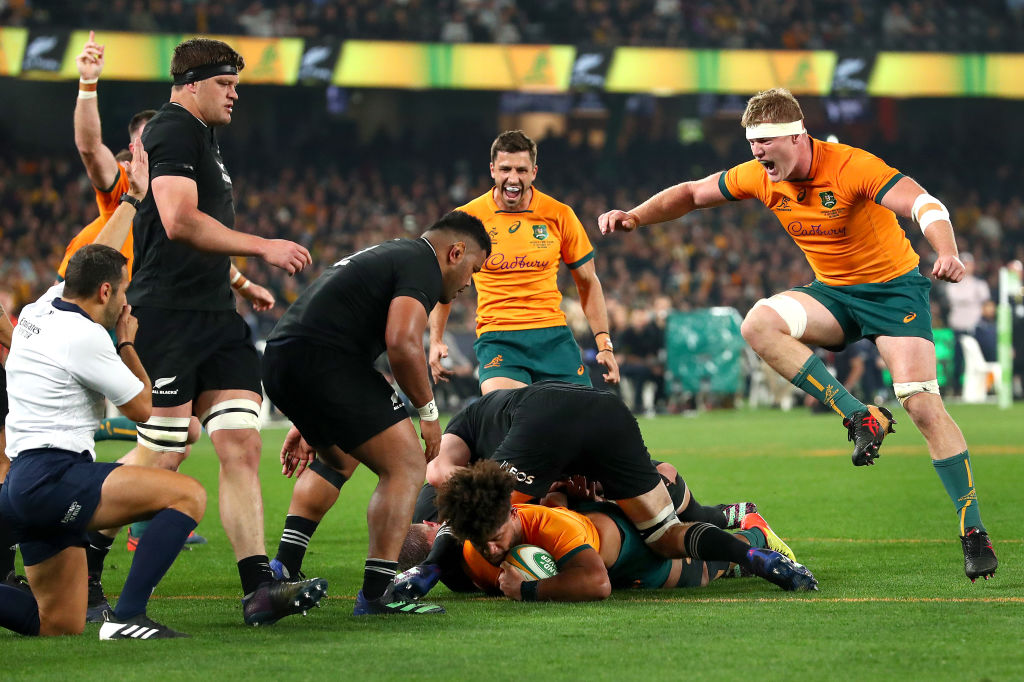 Round #5 clash was a thriller with nine tries in Melbourne

Neville has fully recovered from a knee injury picked up in the England Series to take his place in the starting second row alongside Jed Holloway, who has made an impressive start to his Test career since debuting in Argentina last month.

Wilson's return as the anchor of the scrum sees Rob Valetini shift from the number eight jersey to blindside flanker, a position he regularly fills for the ACT Brumbies in Super Rugby, with Pete Samu earning another start at openside flanker after a standout performance in Melbourne last Thursday night.

An unchanged front row will see James Slipper lead the side out at Eden Park for the first time, with David Porecki the starting hooker alongside workhorse tighthead prop Allan Alaalatoa.

NSW skipper Jake Gordon will again start at scrumhalf, partnering Bernard Foley in the halves, who made a seamless return to the Test arena in the side's heartbreaking two-point loss at Marvel Stadium in Bledisloe One.

The back three also remains consistent, with last week's dual try-scorer Andrew Kellaway selected at fullback with Tom Wright and Marika Koroibete on the wings.

21-year-old Angus Bell will make his first appearance of the 2022 eToro Rugby Championship via the pine as the reserve loosehead after overcoming a toe injury he suffered in July.  He'll join hooker Folau Fainga'a and Pone Fa'amausili in the replacement front row.  Fainga'a returning to the place of his International debut back in 2018.

The athletic Nick Frost has also been recalled as the finishing lock, with Fraser McReight set to inject energy later in the game in the backrow.

The experience and leadership of Nic White will be called upon as the replacement scrumhalf, while the versatility of Reece Hodge sees him named on the pine for what will be his 60th Test for Australia.  22-year-old Jordan Petaia rounds out the matchday 23.

The side currently sits third on the eToro Rugby Championship ladder and will be looking to be the first Wallabies team to win in Auckland since 1986.

Wallabies coach Dave Rennie said: “It's great to have Cadeyrn available and Harry's been working really hard to earn another opportunity in the gold jersey, so we're excited for both of them."

"The side parked the disappointment of the last Test early in the week and we have plenty to play for in Auckland on Saturday night.

"New Zealand supporters have an expectation that the All Blacks win at Eden Park and we're excited to get another crack at them at their spiritual home."