The teams for Tri Nations match #2 have been announced for the clash at Suncorp Stadium in Brisbane.

Four players have been named in a Test team for the first time. In an eagerly-awaited Test debut, loose forward Akira Ioane, who first pulled on the black jersey in a non-Test on the All Blacks' 2017 Northern Hemisphere tour, will start in the six jersey. Hooker Asafo Aumua, who also played two non-Tests on the same tour, is also set to make his Test debut from the bench alongside two 2020 All Blacks, 20-year-old loose forward Cullen Grace and 22-year-old outside back Will Jordan.

It will also be a special day for veteran lock Samuel Whitelock, who will make his 100th Test start for New Zealand in his 120th Test, becoming just the fifth player to start in a century of Tests for the All Blacks.

There are also a number of other changes to the matchday 23 which claimed the Bledisloe Cup in Sydney on Saturday.

Codie Taylor starts at hooker, while Scott Barrett starts in the second row, with Patrick Tuipulotu moving to the bench. Ardie Savea returns to the number eight jersey, alongside Ioane, and Captain Sam Cane, with Grace coming in for Dalton Papalii as reserve loose forward.

In the backs, TJ Perenara starts at halfback, with Brad Weber to come off the bench in his first appearance of 2020.  Beauden Barrett will start at 10 with Damian McKenzie coming onto the bench, while Ngani Laumape starts at second five-eighth.

In the outside backs, Jordie Barrett starts at fullback and Rieko Ioane starts on the left wing, with Sevu Reece also making his first start of 2020 on the right wing.

To watch Ian Foster talk about the team for this week, click here.

All Blacks Head Coach Ian Foster said: "We have reset this week and our focus has been on this weekend and the Investec Tri Nations.  It's an All Blacks - Wallabies Test and that's special.  We know how fired up they'll be, so we have to make sure we are as well, because we don't want to give ourselves any excuses at the end of it."

In making a number of changes to the squad, Foster explained: "We've been really delighted with the whole squad, so we feel that there are some players who are really putting their hand up and deserve an opportunity. Secondly, it's been a big three-week Test series to date against Australia; it'll be another massive Test, so we've brought in some freshness and new energy into the group. Players are jumping out of their skins to get onto the park."

Foster said the four players named to play their first Test had all been working hard and had earnt the opportunity.

"We've been really impressed with Akira. He's keen, he's ready and to have his first Test start is pretty special.  I know Asafo is also excited for his first Test and he'll bring a lot of energy and enthusiasm when he comes off the bench.

"Cullen Grace is a young man who has also been very impressive.  He's got a nice, quiet demeanour about him, but we know he's excited.  Will Jordan has also been working really hard; he's settled in really, really well and he's got a calmness about him.  He's been doing a great job behind the scenes and we're delighted he's got his opportunity."

In a unique build-up to the Test, Covid-19 protocols for the Tournament mean the All Blacks will fly from Sydney into Brisbane several hours before the game and return to Sydney post game.

Foster said the team were ready for the unique circumstances.

"We have to change the structure of our game day preparation, but we don't have to change the approach.  It's obviously going to be a different Test day for us, but it doesn't mean it's going to be disruptive. We've worked hard on getting a structure in place that we think is the right one for Saturday and just have to make sure that when the whistle goes, we are ready."

Wallabies coach Dave Rennie has named Lachlan Swinton [pictured below] and Tom Wright to debut in the fourth and final Bledisloe Cup clash against New Zealand at in Brisbane on Saturday night.

The  Test will also serve as a major milestone for James Slipper, who will become just the 13th Wallaby to play 100 Tests for Australia when he runs out in the number one jersey in his home state.

He’ll be joined in the front row by Brandon Paenga-Amosa, who starts for the third consecutive match at hooker with Brumbies skipper Allan Alaalatoa at tighthead prop. Injury to Lukhan Salakaia-Loto will see a new second row combination of Rob Simmons and Matt Philip at Suncorp Stadium, a venue the side has won three of their past four Tests against the All Blacks. 23-year-old Swinton will be joined by captain Michael Hooper and youngster Harry Wilson in the loose forwards.

Nic White will start at scrumhalf in all four Bledisloe clashes in 2020, partnered by Reece Hodge who will wear the number 10 jersey for just the second time in his Test career.

An all-new midfield sees Queensland Reds duo Hunter Paisami and Jordan Petaia at inside and outside centre respectively. 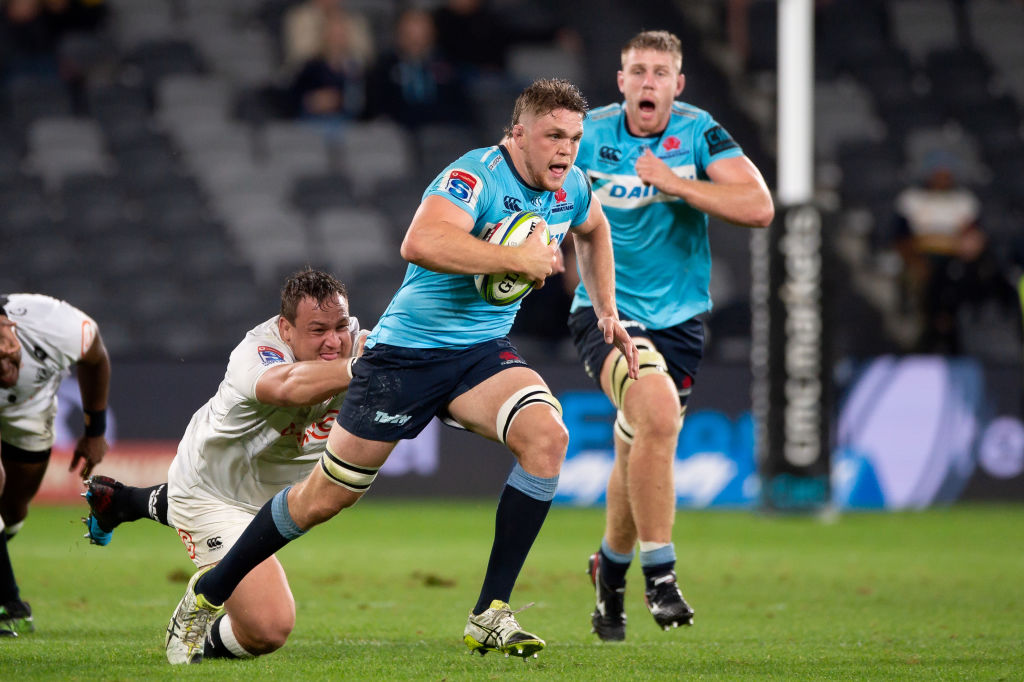 Wright is set to become Wallaby number 939 when he runs on for debut, with his Brumbies teammate Tom Banks returning to fullback and Marika Koroibete finalising the back three.

Hooker Folau Fainga’a returns to the match day squad as a replacement with Taniela Tupou and Angus Bell, who is set to follow in his father Mark’s footsteps with his first Test cap off the bench.

After making his debut last weekend, Tate McDermott will again be called upon to provide spark as the replacement scrumhalf with promising playmaker Noah Lolesio and the electric Filipo Daugunu rounding out the team.

For video interview and audio with Rennie, please click here

Qantas Wallabies coach Dave Rennie said: “It’s going to be a really special night for James in front of his family and friends back at his home ground and I know the team will be doing everything they can to make sure it’s a memorable result.”

“Lachlan, Tom and Angus have been excellent over the past seven weeks and have earned their first jersey for Australia through hard work and good performances.

“As a whole group we were really disappointed after last weekend and we get a chance to show our character on Saturday in Brisbane."

* Jordie Barrett has scored a try in each of his last five consecutive starts for the All Blacks.

* Australia have lost only one of their last four Tests against New Zealand at Suncorp Stadium and picked up a 23-18 win over the All Blacks in their last meeting there in October 2017.

* The All Blacks and Australia will be playing their 170th Test against each other. New Zealand has won 117 of those matches, Australia 44 with eight draws.  The All Blacks have held the Bledisloe Cup since 2003.