Reds backrower Harry Wilson and Melbourne fullback Reece Hodge both selected for the decider in Sydney.

In what will be the first Test at the iconic Sydney Cricket Ground since 1986, Rennie has made four changes to the starting XV with Nick Frost earning his first Test start, and James Slipper returning to the familiar loosehead prop role.

Australia played its first ever match of Test Rugby at the SCG in 1899 against the British Isles, and with the impending opening of the neighbouring Allianz Stadium, it is likely that Saturday night’s clash will be the last at the birthplace of International Rugby in Australia.

Fittingly, the match is sold out – the first time the Wallabies will play in front of a full capacity sell-out in Australia since the 2019 Bledisloe Cup clash in Perth, with more than 40,000 spectators to watch the Ella-Mobbs Cup being presented for the first time to the winning captain.

Test centurion Slipper will be joined by David Porecki who plays his first Test in his hometown at hooker with the damaging Taniela Tupou to start at tighthead prop.

Frost will combine with Rebels stalwart Matt Philip in the second row, with Wilson’s inclusion at blindside flanker to complement a backrow that includes captain Michael Hooper and number eight Rob Valetini.

Brumbies duo Nic White and Noah Lolesio will partner in the halves for the third consecutive match, with the former set to bring up his 50th appearance in the gold jersey.

The midfield remains unchanged from last weekend with Samu Kerevi and Hunter Paisami to combine in the centres.

A new look back three sees Hodge at fullback with the fleet-footed Tom Wright and powerful Marika Koroibete on the wings.

Folau Fainga’a is again the finishing hooker with Sydney-born Angus Bell and the returning Allan Alaalatoa the replacement props.

Usually finding himself in the backrow, Rob Leota’s versatility will be called upon to cover the locks due to the increasing injury toll.  Super-sub, Pete Samu will again wear the number 20 jersey. 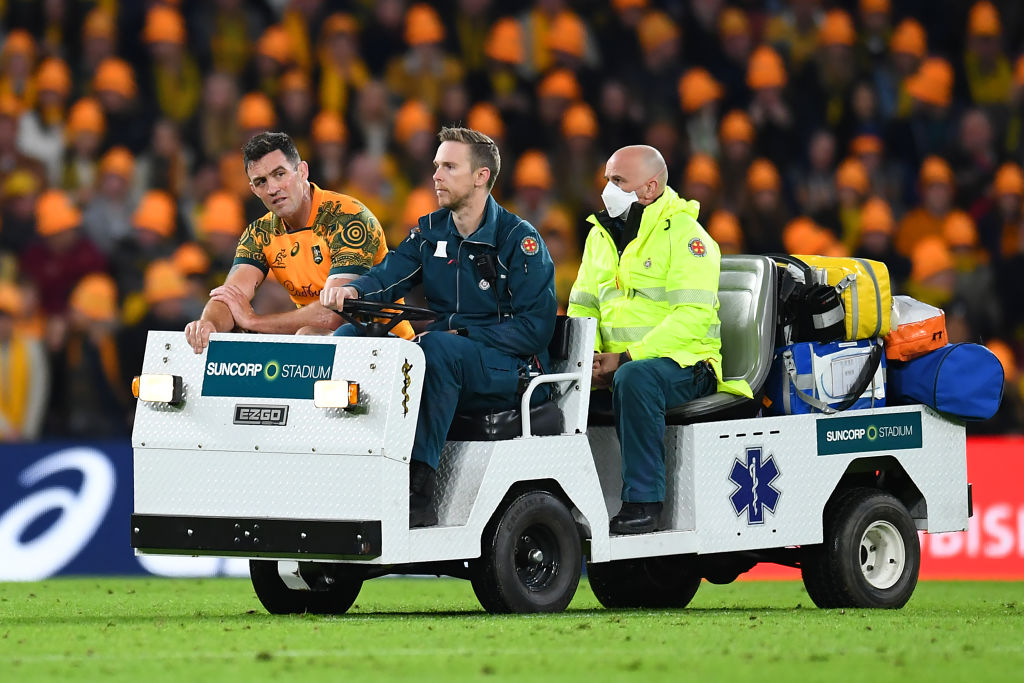 Injury hit Wallabies will have tough task against England in Sydney

Reds skipper Tate McDermott is another who will see his first minutes of Test Rugby this weekend, named to provide spark as the reserve scrumhalf, while Len Ikitau will make his return from calf soreness via the pine.

Former NRL star Suli Vunivalu has been named for a potential Wallabies debut from the bench, roundiung out the matchday 23.

Australia played their first ever Rugby Union Test at the SCG in 1989 against the British Isles, with Saturday night’s International set to be the last for some time with the construction of the new Allianz Stadium nearing completion.

Wallabies coach Dave Rennie said: “Harry and Reece are both super excited to wear the Wallaby gold for the first time this year and have trained extremely well.”

“We know we’re a much better team than how we played in Brisbane and we’ve had a good week of preparation which will allow us to put in a performance that makes Australians proud on Saturday night.

“As a squad we have an opportunity to go to Sydney and lift some silverware in a series decider and that’s something that highly motivates us.”