The Springboks’ end-of-year tour ended on a sour note as they stumbled to an error-ridden 20-11 loss against Wales in Cardiff.

This was the fourth consecutive loss against the Welsh for the Springboks and confirmed why Wales are ranked third in the world, putting a massive dent on the talk of a Springbok revival in the 2018 season.

Wales confirmed their timely run of form, winning their ninth consecutive game on the trot and racking up their biggest scalp of the Autumn season as they easily forced the Springboks onto the back-foot and made them look ordinary all around the park.

In a game that was hardly pretty, Rassie Erasmus’s record was pinned back at 50 percent for both the season and the tour, and left more questions than answers with only four tests left until the Rugby World Cup for the Springboks.

All the momentum and goodwill from the wins over Scotland and France and the near miss against England earlier in the month were turned to mush as the Boks lurched from penalty to penalty and mistake to mistake, failing to trouble the Welsh defence for most of the game and being harassed at the breakdown.

The Welsh defence, which was superb, totally dominated the Springboks at the breakdown, with Ellis Jenkins having a field day in that department, often finding the Bok runners isolated or forcing the Boks into mistakes when they were on attack.

Wales must have the best defensive side in international rugby at the moment, and their stinginess in not allowing the Boks metres also says a lot about the Bok method of attack.

With a willingness to restart the game quickly, they took away the Boks’ best attacking weapon in the lineout, negated them in the scrums and then bossed them at the breakdown.

With that in mind it was difficult for the Springboks to launch out wide as they weren’t able to get dominance up front.

Where Wales seemed to have players who attacked the ball all around the park, the Boks were left with only one weapon at the ruck – hooker Malcolm Marx, who succeeded in securing four turnovers, but was left to fight the battle alone.

And the breakdown woes were the start of the problems, leaving the Springboks with many questions – especially if they aren’t able to physically dominate a team with the pack that they selected.

Ironically their best player on the park wasn’t even meant to play – with S’bu Nkosi injuring himself in the warm-up, Cheslin Kolbe stepped up to the plate and provided an inspirational performance, beating a number of players with his feet whenever he touched the ball.

But all too often the performances were individual, and while the Welsh defence may have creaked, it soaked up the pressure well, not giving the Boks any sort of comfort on attack.

To be fair though, the Boks did score twice – well, almost – as Pieter-Steph du Toit touched the sideline early on as he ran in out wide, and Jesse Kriel looked to have scored but the TMO ruled there was no clear evidence the ball touched the ground.

It was one of those nights, 50-50 decisions were going against the Boks, and the visitors did nothing special to overturn the momentum.

It raises a number of questions ahead of the World Cup, many of which will centre around the Boks' ability to break down sides with a good defence, and their ability to dominate when their pack can’t secure the breakdown.

And once again they had a bad start through some poor defensive work, and had to play catch-up rugby all along.

The first try came from a simple misread by Marx on Jenkins, who threw a dummy and found a gap on the inside of the Bok hooker, putting Tomas Francis over the line.

And the second, minutes later saw Aphiwe Dyantyi shoot inside and out of line, and when the pass went past him, there were a number of players lining up to score, which Liam Williams did to put Wales 14-0 up early.

A solitary Handre Pollard penalty was the only thing that the Boks could smile about in the first half, but things got better in the second when they started finding space in the midfield and after eight phases some quick hands from Willie le Roux flipped the ball onto Kriel on the wing who dived in at the corner.

A penalty by Elton Jantjies brought the Boks within three, but then some moments of madness handed momentum back to Wales and took the Boks’ chances of a late victory away.

Jantjies knocked on from an up and under, but didn’t play to the whistle with Wales kicking the ball downfield and despite Williams clearly diving on Dyantyi, the penalty went the other way and Dan Biggar kicked the first of two penalties to put the nail in the coffin.

Another break by Jonathan Davies led to the second penalty and Biggar added another three points, leaving the Boks frustrated and irritated at a loss they have only themselves to blame for. 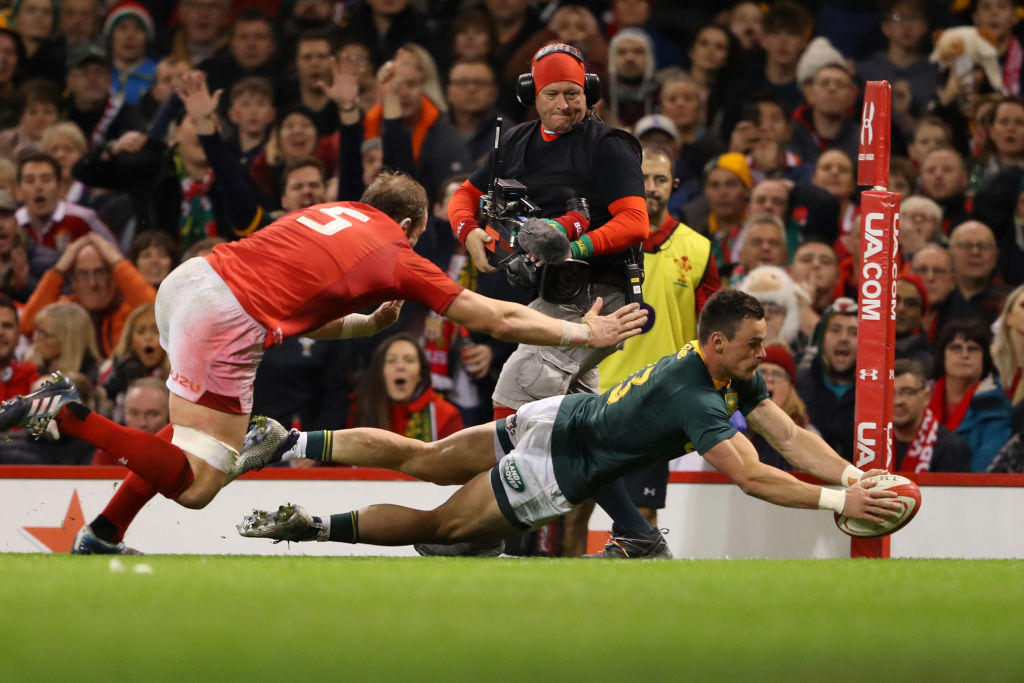