Wallabies and All Blacks Comfortable Winners as RWC Looms

The All Blacks outclassed Tonga while the Wallabies saw off Samoa in final preparations for the RWC in Japan.

The Qantas Wallabies have emerged 34-15 victors over Manu Samoa in a bruising encounter at Bankwest Stadium in Sydney's west tonight.

The Wallabies scored six tries to Samoa’s two in blustery conditions in the final match for both nations ahead of the game's showpiece event in Japan later this month.

The home side raced to a 22-3 half time lead, but conceded the first two tries of the second stanza to hold a slender 7-point lead as the game clock ticked down inside the final 10 minutes.

A Dane Haylett-Petty try in the 71st minute provided some breathing space for the Wallabies, before replacement scrumhalf Nick Phipps laid on the final try which was finished by Matt To'omua right on the final whistle to make it a 19-point winning margin.

Towering lock Adam Coleman crossed in the opening exchanges of the match giving the Wallabies an early lead. Eventual man of the match, Marika Koroibete then swiftly followed, turning defenders inside out on the way to the tryline at the 15-minute mark.

The Samoans looked to have answered when prop Michael Alaalatoa barged over under the posts minutes later, however the TMO denied the visitors on replay and they settled for 3 points from the boot of Tusi Pisi.

Veteran centre Adam Ashley-Cooper, and then flanker Lukhan Salakaia-Loto added tries for the men in gold to set up a commanding lead at the half.

It was then a more composed Samoan side that emerged from the break as they took the challenge up to the Wallabies physically and pressured the Australian ball, until eventually breaking through when shifty replacement half Dwayne Polataivao dotted down after darting down the short side in support from a Samoan scrum win.

When Polataivao crossed again from a brilliant exchange of passing through the middle of the ground, the contest came alive.

Cool heads prevailed for the Wallabies, who took command of the arm wrestle inside the final 10 minutes to run away with the win. 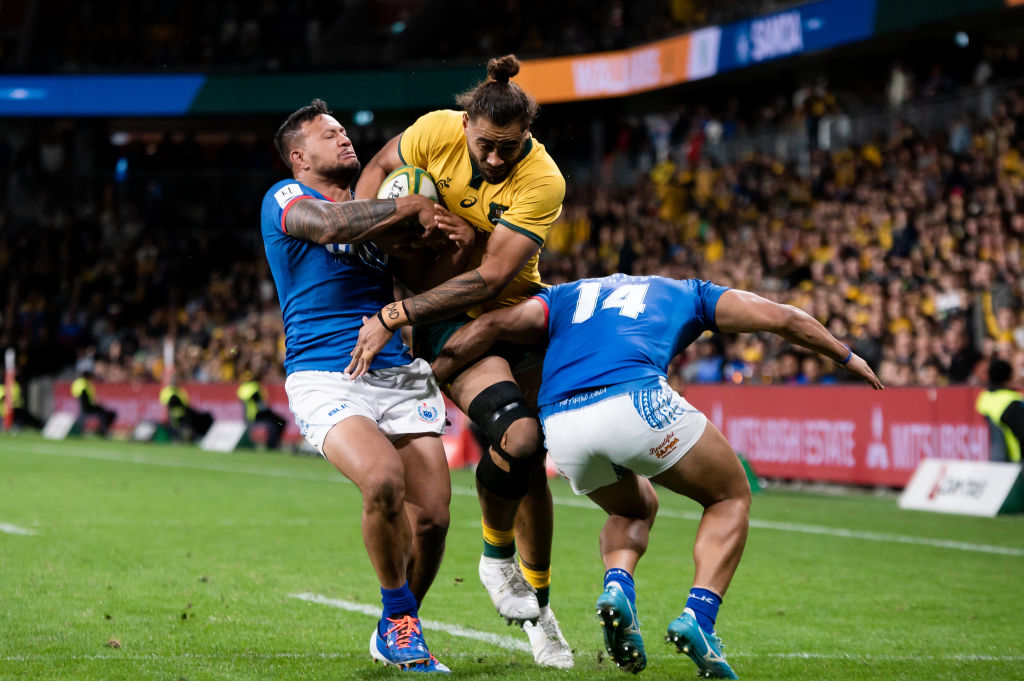 As send-offs go the All Blacks had a spring-like romp over a Tonga side who failed to produce the expected passion to suffer a 92–7 loss on a fine but windy day in Hamilton.

The benefits for the All Blacks were the chance to work on continuity plays and set moves, power scrummaging, to twice achieve tightheads, and on the rare occasion Tonga managed a breakthrough a workout for the defence. Valuable game time was also achieved for all of the bench as well. With no injury concerns it was a successful exercise ahead of the Rugby World Cup.

Working miss out plays from the outset in their backline moves, the All Blacks broke open the Tongan defence to carry play 40-50m downfield without being able to secure the final scoring advantage.

But after centre Anton Lienert-Brown shook loose a tackle attempt he got the ball to left wing George Bridge who was brought down just short of the line. The ball was moved to the left and right wing Sevu Reece benefited with the opening try after eight minutes.

A turnover to flanker Ardie Savea on halfway resulted in fullback Ben Smith having access to a narrow blindside. He used it to clear out on an unchallenged 50m run toe the line in the 15th minute.

Another opportunity for Bridge saw run into space but he lost contact with Barrett who had moved inside. However, Bridge wasn't held and he ran towards the goalmouth before being halted. The ball was moved right, a dropping pass being pulled in by a diving No.8 Kieran Read. His pass outside was tipped by a Tongan defender and bounced into the path of hooker Codie Taylor who scored in the 19th minute.

The driving maul was used to effect to set up Bridge's 26th minute try. It came after a powerful All Blacks scrum secured the tighthead. Barrett opted to try a short kick and while contained by Tonga to clear to touch the All Blacks used the lineout to unleash their maul. When the ball was moved left, Lienert-Brown again created the space to give Bridge the successful run to the corner.

Tongan blindside flanker Sione Kalamafoni created some excitement when taking a kick from his fullback David Halaifonua which was allowed to bounce. Kalamafoni went back and then ran straight through the defence, but opted to kick ahead. He never had the speed to beat Barrett to the touchdown.

Another quick tap freed Reece on the right win and when blocked he slipped an overhand pass to supporting halfback TJ Perenara in the 35th minute.

Two tries in quick succession, a second for Ben Smith and one for second five-eighths Ryan Crotty after the All Blacks ran the ball from their own 22m area with Savea and Reece combining before Crotty was on hand in support.

The second half couldn't have started worse for Tonga as replacement first five-eighths saw his first act on debut, the restart, fall straight into Bridge's hands for him to cross after nine seconds.

He was to cross twice more in the half, becoming the 13th All Black to score four tries in a Test, as they ran the ball from everywhere and like Savea, he was able to benefit from an astute tactical kick from Ioane to score. 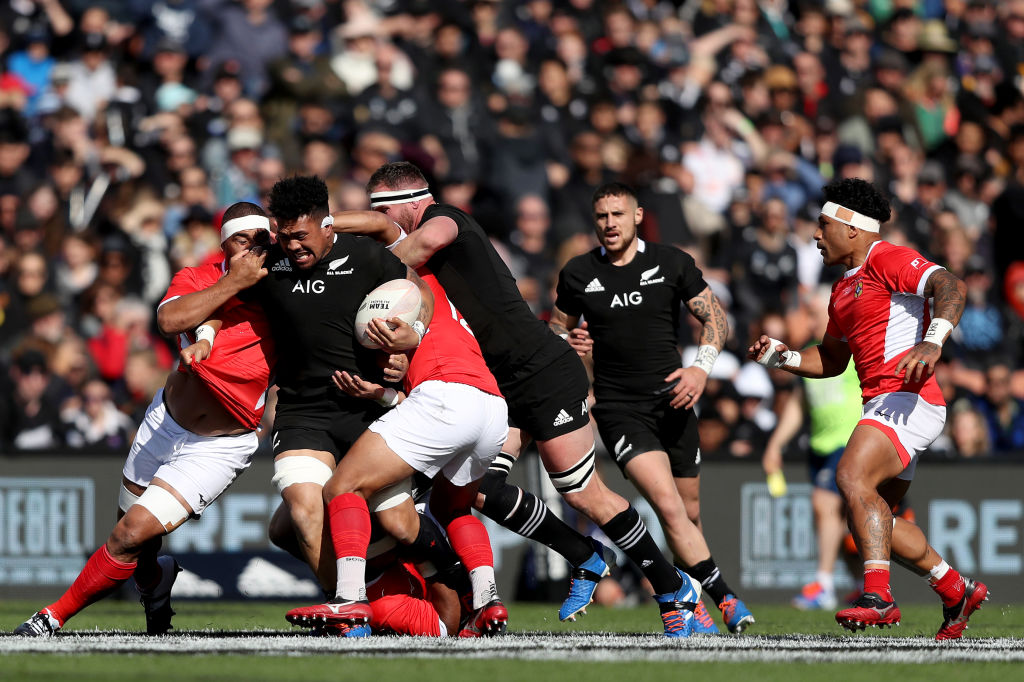