Rugby Australia has welcomed the arrival of the Fédération Française de Rugby ahead of the three-Test series that kicks-off on July 7.

The French team touched down in Sydney on June 23 and will now undergo its government-mandated quarantine ahead of the eToro Test series next month.

“I want to thank Bernard Laporte, Fabian Gautier and the FFR for their partnership in ensuring this series could go ahead. It has been a mammoth effort by all involved.

“We are now just two weeks away from the start of the series, which kicks off with the Wallabies’ first match at the historic Sydney Cricket Ground in 35 years.

“We know the Australian Rugby community is looking forward to seeing their team back in action in what promises to be an exciting series against a French team which is determined to stamp its mark as they build toward a home Rugby World Cup in 2023.

“The Wallabies are excited to play in front of their passionate fans, so make sure you don’t miss out and secure your tickets to one of the three Tests in Sydney, Melbourne or Brisbane now.

“Appreciating that we continue to operate in a dynamic environment with COVID-19 impacts, we are moving ahead with our plans to host these matches as planned, subject to any further advice from our State Government partners,” Marinos said. 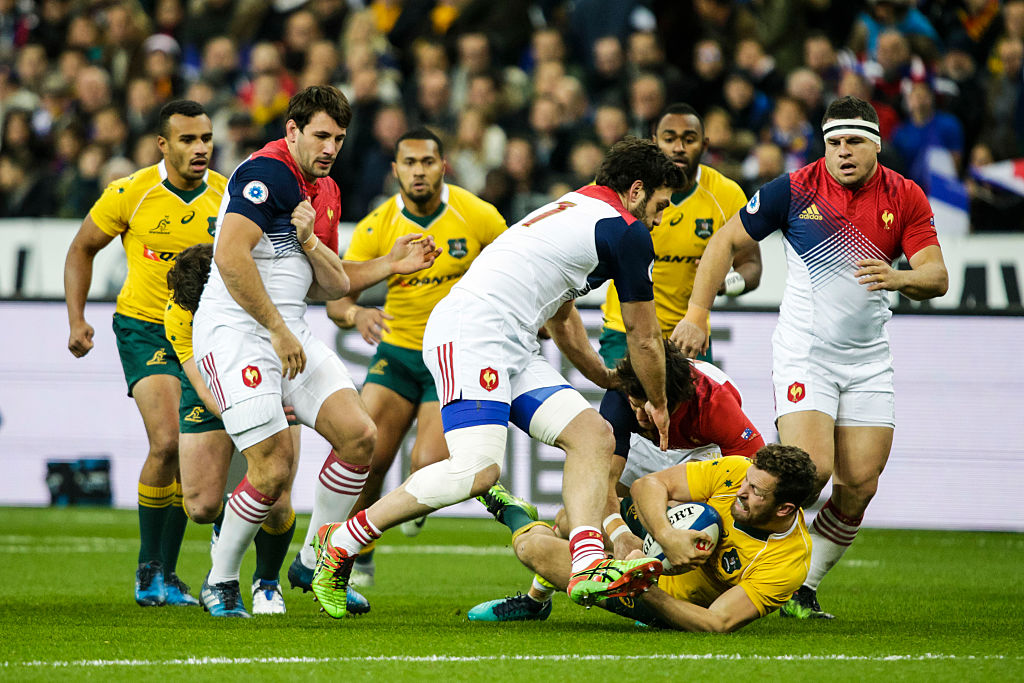 The Wallabies have played France 47 times winning 27, losing 18 with two draws: France last toured Australia in 2014 and lost the series 0-3; the last time the two teams met [above photo] was in Paris in November 2016 when Wallabies pipped their hosts 25-23

Michael Hooper will once again captain the side after making his return from Japan. Lock Matt Philip also makes his return to the set-up after finishing his stint with French club Pau.

The squad contains 11 uncapped players with a further 14 players having played less than 10 Tests. The debutants include Brumbies duo Len Ikitau and Lachlan Lonergan along with Force hooker Feleti Kaitu'u and Rebels back-rower Rob Leota. It also marks a return for Sitaleki Timani, with the Western Force veteran last played for Australia 2760 days ago on the 2013 Spring Tour against Scotland.

France coach Fabien Galthie opted for a youthful approach as he named a 42-man squad for the upcoming three-Test series against Australia. Galthie announced the squad after the Top 14 semi-finals, with French authorities deeming any players in the Final unavailable due to quarantine restrictions.

Castres Olympique flanker Anthony Jelonch has been appointed captain for the tour, with the first Test set to kick off on July 7. This comes after Toulon flanker Charles Ollivon was ruled out for the next six months after suffering an ACL injury to his left knee. The injury occurred in the final day of the regular season whilst playing for Toulon.

Jelonch is joined in the side by the likes of Damian Penaud, Teddy Thomas and Romain Taofifenua as the French ramp up preparations ahead of Rugby World Cup 2023 on home soil.

The squad contains a strong representation from their successful U20 sides, which went on to win to win successive world titles in 2018 and 2019.

Vanverberghe and flyhalf Louis Carbonel are amongst the strong French contingency that will reignite their rivalry with the likes of Angus Bell, Harry Wilson and Lachlan Lonergan following their narrow one-point win in the 2019 U20 World Championship Final over the Junior Wallabies.