Wallabies crushed by Beauden Barrett and the brilliant All Blacks

Akin to last week, it was a mistake-ridden first half but two pieces of quality saw the All Blacks go into the break 14-7 ahead thanks to a brace of Barrett tries.

Will Genia had levelled matters for the Wallabies but they fell away in the early stages of the final 40 metres when Joe Moody and Liam Squire touched down in quick succession.

Although Reece Hodge crossed the whitewash to reduce the arrears to 16 points, successive Barrett efforts eased the hosts clear as they claimed a second victory over their trans-Tasman rivals in 2018.

After this loss, further questions will be asked of Wallaby boss Michael Cheika in a defeat which resembled the previous match between the two.

New Zealand started slowly in their opening Rugby Championship encounter and were similarly slack at Eden Park, but their quality eventually told. Mistakes were prevalent in the first 10 minutes and Australia had a couple of chances to put the hosts under duress but, without their primary attacking threat Israel Folau, Hansen’s charges were relatively comfortable.

The All Blacks were struggling to find their fluency but one moment of brilliance appeared to change all that. Shorn of Folau, who was the visitors’ biggest aerial threat, the Wallabies were exposed as Ben Smith brilliantly collected Aaron Smith’s box kick. Play was shifted wide and Jordie Barrett broke through before his brother, Beauden, took a superb line off Aaron Smith’s pass to touch down under the posts.

It was a classic example of what the world champions can do on the front foot but, to Australia’s credit, they continued to pressurise the home side’s attack. As a result, Michael Cheika’s men were gaining plenty of possession through their opponents’ errors and they eventually benefited.

Kurtley Beale was the instigator, kicking through to Marika Koroibete, and the two combined to send them to within inches of the line. Although the initial attack was halted, Genia spotted a small gap following a five-metre scrum to scamper over from close range.

Cheika’s charges were back in the contest but, unperturbed, New Zealand created another outstanding score. This time it came from turnover ball and once again their wing played a crucial part after Smith went on a mazy run down the right. He found Jack Goodhue and, despite seeing the centre hauled down just short, Barrett was on hand to cross the whitewash for a 14-7 lead at the interval.

That try proved to be a hammer blow for Australia with New Zealand raising the intensity in the second period and increasing their buffer minutes into the half. When Jordie Barrett was needlessly taken off the ball, play was taken inside the opposition 22 and Moody barrelled his way over.

Following what was effectively the game-clinching try, the All Blacks put the result beyond doubt minutes later when Brodie Retallick showed his range of skills by deftly sending Squire through a hole to score.

Hodge responded almost immediately for the visitors but Barrett’s scything break resulted in the fly-half touching down for his hat-trick.

The pivot wasn’t done there and, after Damian McKenzie had broken through, good hands on the outside gave the two-time World Player of the Year a fourth for a 30-point haul. 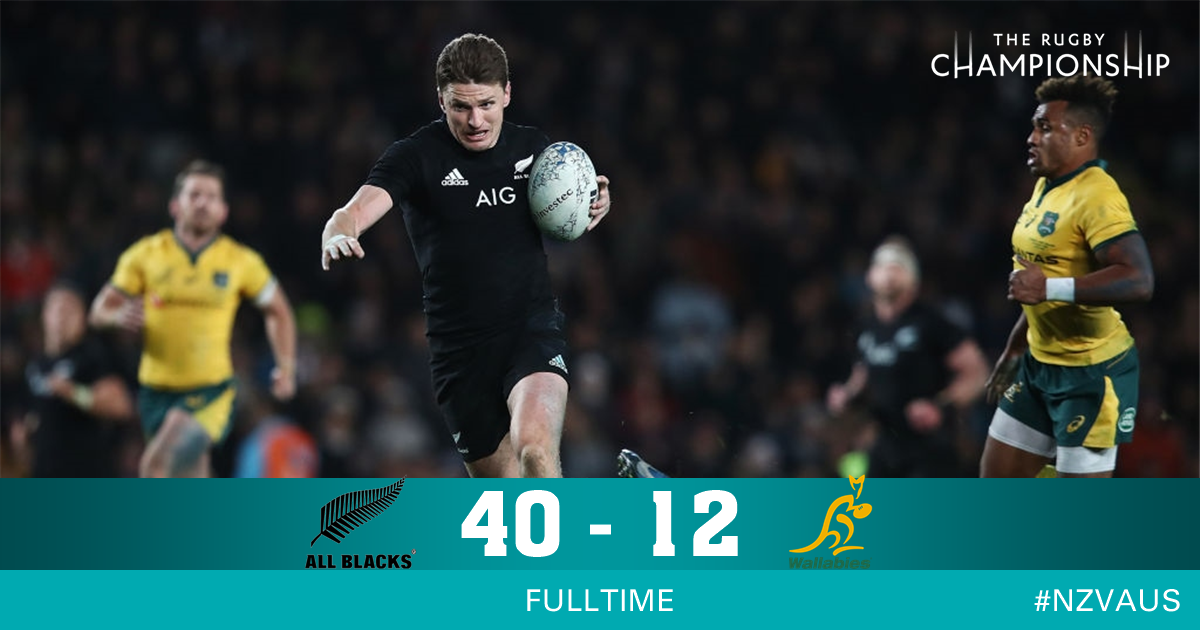