Heartbreak for Wallabies again as they lose narrowly for third straight week.

The Wallabies have fallen agonisingly short to Ireland, the number one-ranked team in the world, in a gruelling nail-biter in Dublin.

It was a tight and tense battle throughout in the Irish capital, with the scores level for much of the match, before the Irish nosed ahead late to win 13-10.

It took 65 minutes for the first try of the game as defence dominated the contest, with Bundee Aki putting the Irish in front.

A 76th-minute penalty to Ross Byrne proved the difference, with the visitors' late gamble to hunt for the win proving unsuccessful when the referee saw a penalty in the attacking maul.

“It was gutsy, we hung in the fight,” Wallabies coach Dave Rennie said after the match.

“There was a fair bit of adversity tonight – we ended up having to play with 13 so huge amount of character.

“There’s frustration because we had our opportunities. You have to give credit to the Irish defence – gutted for the boys because it was very winnable.”

The visitors showed promise early on as Nic White looked to have dived over for the first try inside three minutes before it was brought back for a neck roll at the ruck by Dave Porecki.

They then suffered a blow with Hunter Paisami forced off the field with a knee injury just four minutes in, with the world number one Irish opening the scoring via a Jack Crowley penalty, the lone points of the first half.

Paisami was shortly followed off by Porecki, who failed his HIA.

The Wallabies ended up feeling the brunt of a crackdown on neck rolling at the ruck as Folau Fainga’a was sent for ten just before the end of the first half.

Sensing an opportunity, the hosts marched onto the attack after the break with the Wallabies forced down to 13 as a result of having both hookers on the sidelines, leading to uncontested scrums.

The Wallabies' defence proved heroic, with Michael Hooper time and time again getting over the ball to force the turnover

This was complemented by a great scramble tackle from Bernard Foley to put Mack Hansen into touch, stopping a certain try to Jamison Gibson-Park.

As they returned to 15, the injury carnage continued for the visitors as Rob Valetini limped from the field.

It went from bad to worse minutes later when Taniela Tupou’s first carry ended in disaster, collapsing to the ground with a non-contact injury, stretchered off the field with an apparent Achilles problem. 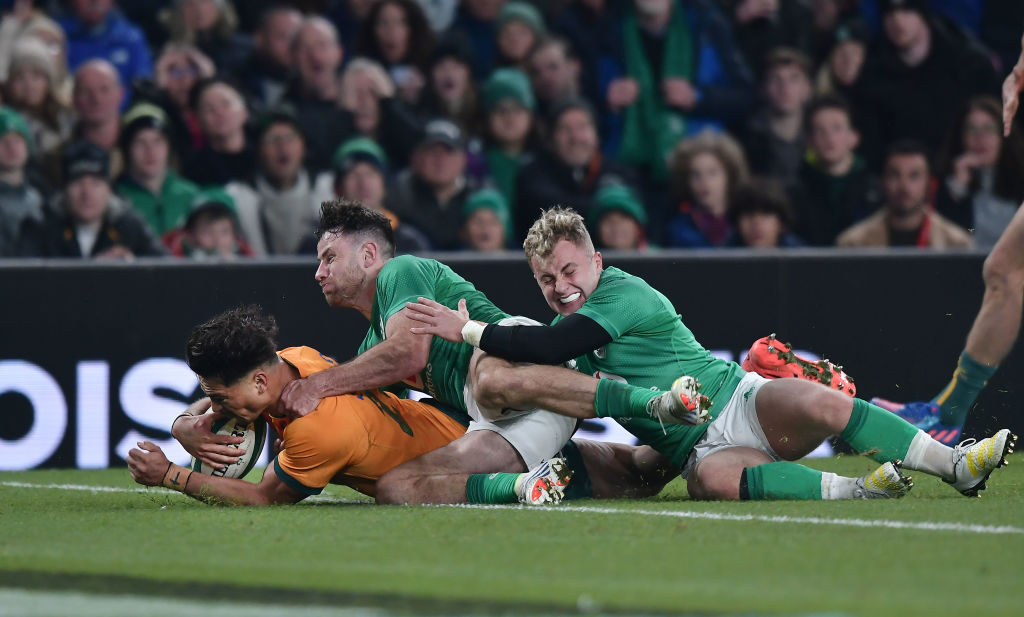 The injury came moments after Tupou earned a scrum penalty for the visitors, allowing Foley to level the scores up with 25 minutes to go.

Andrew Kellaway added to the tally as he was replaced with a foot/toe injury, forcing Jake Gordon into the back three.

The relentless pressure of the Irish eventually led to the first try of the game as replacement Aki powered over the line to give the hosts a 10-3 lead.

A great run from Will Skelton got the Wallabies back on the front foot and the impressive Petaia levelled it up as he glided over the line [pictures above].

When Australia was penalised for a scrum infringement in the 75th minute, replacement flyhalf Ross Byrne stepped up for the hosts, slotting an angled penalty goal from 35 metres out to give them the lead.

With time running out, the Wallabies went for the win when they put the ball into touch for a lineout, however the maul infringement and hosts’ impenetrable defence saw the home team hold on for the tough win.