Australia came from 13-34 down to beat Wales 39-34 in an extraordinary Test in Cardiff.

Indeed, the Wallabies scored 26 unanswered points in the final 23 minutes to erase a massive deficit and beat Wales in their final match of the season in Cardiff.

Down by 21 points as the match approached the final quarter, the injection of fresh legs and a scintillating two-try performance from Player of the Match Mark Nawaqanitawase turned the momentum,

Lachlan Lonergan scored a late try and secured a key turnover for a famous victory to conclude the Wallabies’ Spring Tour.

“It was a game around momentum,” Wallabies coach Dave Rennie said after the game. “They got it early, pressure resulted in a couple of cards.

“I thought we got fantastic impact off the bench, who we went to early, and we had all the momentum late in the game and applied the pressure there.

“Huge amount of ticker in this group, and we had a number of guys who played in the Italy game who had a chance at redemption – there were a number of young guys who really fronted today.

Ben Donaldson got the chance to settle his nerves on his starting debut, opening the scoring via a penalty.

However, it was all Wales in the opening quarter as lock Alun Wyn Jones proved his class in the tenth minute, turning playmaker to put Jac Morgan over after breaking through the line.

As both sides traded penalties, number eight Taulupe Faletau celebrated his 100th game for Wales in style as he dived over in the corner, allowing the hosts to take a quick 20-6 lead.

The visitors settled into the contest and built some pressure via solid breaks from Len Ikitau and Nawaqanitawase.

They eventually found their way over the line via the rolling maul and Folau Fainga’a.

Dave Rennie’s men were forced to dig deep when Jake Gordon was yellow-carded for a professional foul, failing to get back onside after a Rio Dyer break.

With Tom Robertson sent to the bin shortly after the break for too many scrum penalties, Wales were set to close out the game when Morgan crossed for his second.

Dyer’s converted try saw the home side out to their largest lead at 34-13 after 52 minutes.

Pete Samu's arrival was timely as his grubber put Wales under pressure, and Mark Nawaqanitawase [pictured below] would go over for his first try, standing up his opposite number to strike in the corner. 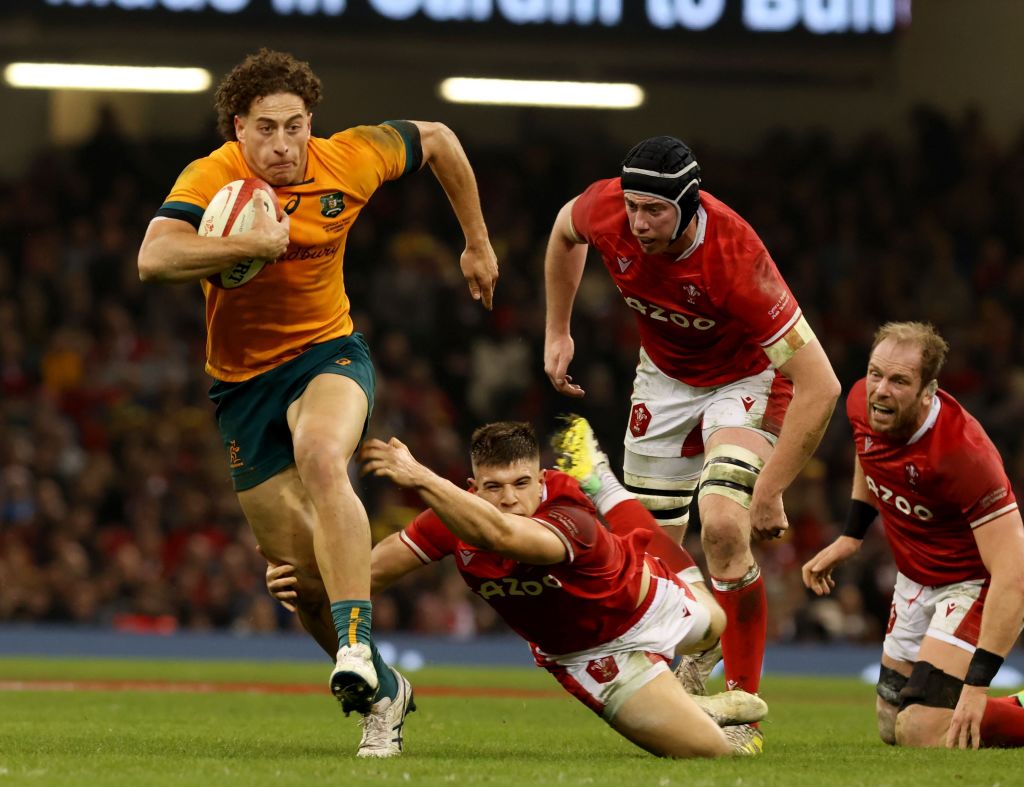 Eight minutes later, Samu snatched an intercept and looked to race away, but was stopped by the errant leg of Wales captain Justin Tipuric, who subsequently saw yellow for his trip.

This reduced the hosts to 14 and accelerated the Wallabies' momentum, who seemed to find a second wind.

A well-worked line-out move saw replacement hooker Lachlan Lonergan wrapping around and turning the ball back inside for a flying Nawaqanitawase, who sliced through for his second, reducing the margin to just nine.

The visitors followed this up with a dominant rolling maul with eight minutes remaining, earning a penalty try as Ryan Elias was yellow-carded for collapsing the maul as the Australians honed in on the tryline.

With the home side up 34-32 a grandstand finish beckoned, however Wales would play three minutes with 13 players before Tipuric returned from his yellow card.

It was Nawaqanitawase who produced more magic to find space, putting the visitors on the attack before a wide ball from Len Ikitau was knocked down by a Welsh defender, bouncing up for Lachlan Lonergan to collect on the right wing and score to give the Wallabies an unlikely lead with 90 seconds to go.

There was one late twist as referee Matt Carley found a penalty with seconds remaining giving Wales one last chance.

Asked to defend their line again, the Wallabies remained resolute until Lonergan proved the hero once more, coming up with the steal and booting the ball out to seal a famous victory.