The Wallabies have pulled off an incredible 30-28 victory over England at Optus Stadium.

The 47,668-strong crowd were treated to a thriller as three second-half tries sealed the victory.

The hosts suffered a major blow before the game with flyhalf Quade Cooper ruled out with a calf injury. This pushed Noah Lolesio to the starting side and James O’Connor to the bench.

England inside centre Owen Farrell opened the scoring in the sixth minute with a penalty as the hosts struggled for discipline.

They created the first major chance of the game when Farrell set up Tom Curry, however, a great tackle from Marika Koroibete stopped a certain try to Joe Marchant.

With Farrell adding three more, the Wallabies lost fullback Tom Banks, forced from the field with a suspected broken arm.

New flyhalf Noah Lolesio reduced the margin with a penalty of his own, opening the scoring for the Wallabies.

However, the Wallabies were reduced to 14 men for the rest of the game after Darcy Swain was sent off for an alleged headbutt on England lock Jonny Hill.

Despite this, the Wallabies hung tough as went to the break tied at 6-all thanks to the boot of Lolesio.

Lolesio put the Wallabies in front after the break with his third penalty before England found a way through via Ellis Genge and the rolling maul.

Needing a spark, Marika Koroibete came up with a brilliant regather from the kick off to put the Wallabies in perfect field position. 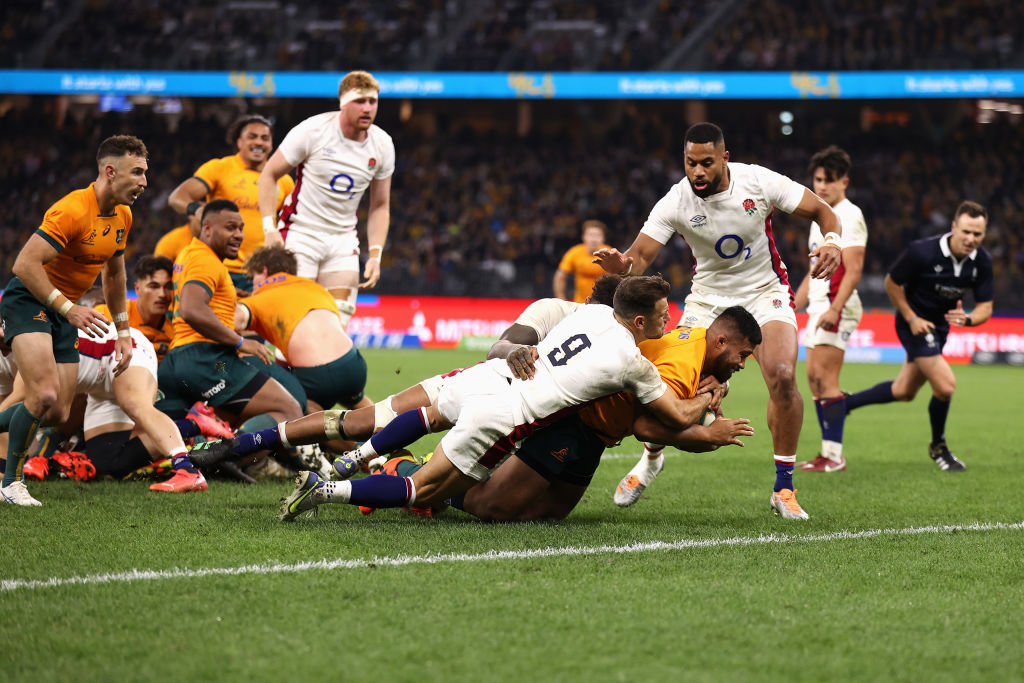 Some wonderful hands from Len Ikitau and Andrew Kellaway put Jordan Petaia through, who dived over. Noah Lolesio slotted the conversion from the sidelines to put the Wallabies in front 16-14.

This allowed the Wallabies to build pressure and found their way over via the rolling maul and new Force recruit Folau Fainga’a [see photo above].

Lolesio once again nailed the conversion from the sidelines to push the lead out to 23-14.

With momentum on their side, replacement back-rower Pete Samu sealed the win after a great ball from Jake Gordon.

Two late tries to Henry Arundell and Jack Van Poortvliet reduced the margin late but the game was out of reach as the Wallabies broke an eight-game losing streak to England.