Wallabies prevail in nail biting finish against the Springboks

Australia got their Rugby Championship campaign back on track when they secured a hard-fought 23-18 victory over South Africa in Brisbane on Saturday.

As expected, this was a hard-fought battle between two evenly matched sides but both teams committed a plethora of unforced errors which meant the game had a stop-start nature to it.

Both sides scored two tries apiece although a fine all-round performance from Matt Toomua proved the difference between the sides in the end as he finished with a 15-point haul courtesy of a try, two conversions and two penalties.

Australia made the brighter start and took the lead as early as the second minute when Michael Hooper burrowed his way over the tryline from close quarters after Scott Sio and Allan Alaalatoa went close in the build-up.

Toomua added the conversion but despite being on the back foot early on, South Africa soon took control of proceedings and were the dominant side for the next 15 minutes.

Elton Jantjies opened the Springboks’ account from the kicking tee in the seventh minute after Alaalatoa was penalised for a scrum indiscretion.

The Boks continued to dominate as the half progressed and took the lead seven minutes later when Bongi Mbonambi dotted down off the back of a lineout drive deep inside Wallabies territory.

Jantjies added the extras which gave the visitors a 10-7 lead and they went further ahead in the 28th minute when Makazole Mapimpi gathered a long pass from Faf de Klerk before diving over in the right-hand corner.

But despite that try, the Wallabies were soon back in the match thanks to a mistake from the Boks deep inside their 22. This, when Mbonambi over-cooked a long throw-in at a lineout on his five-metre line. The ball was gathered by Toomua, who had an easy run-in under the posts and he dusted himself off before adding the conversion which meant the match was evenly poised with South Africa holding a one-point lead.

The Boks extended their lead in the 39th minute, however when Jantjies added another penalty after another infringement from the Wallabies at a scrum deep inside their half.

But that would not be the last points of the half as deep into injury time, Steven Kitshoff infringed at a ruck and Reece Hodge landed a long-range penalty from 53 metres out which meant South Africa held a slender 18-17 lead at the half-time.

The second half was a more subdued affair and the opening points of the half was registered in the 55th minute when Toomua slotted a penalty after Kitshoff was blown up again for playing the ball on the ground.

That meant the Wallabies were leading 20-18 and Toomua gave his side a five-point lead when he added another penalty in the 69th minute after Tendai Mtawarira was penalised for illegal scrummaging.

The rest of the half was a tight affair as South Africa tried to regain the initiative but their game was littered with errors which meant they failed to haul in their hosts.

The closing stages was a thrilling affair as the Boks hammered away at the Wallabies’ tryline and the visitors thought they crossed for their third try when Francois Louw crossed the whitewash in the 78th minute but his effort was disallowed due to a knock on from Malcolm Marx in the build-up. 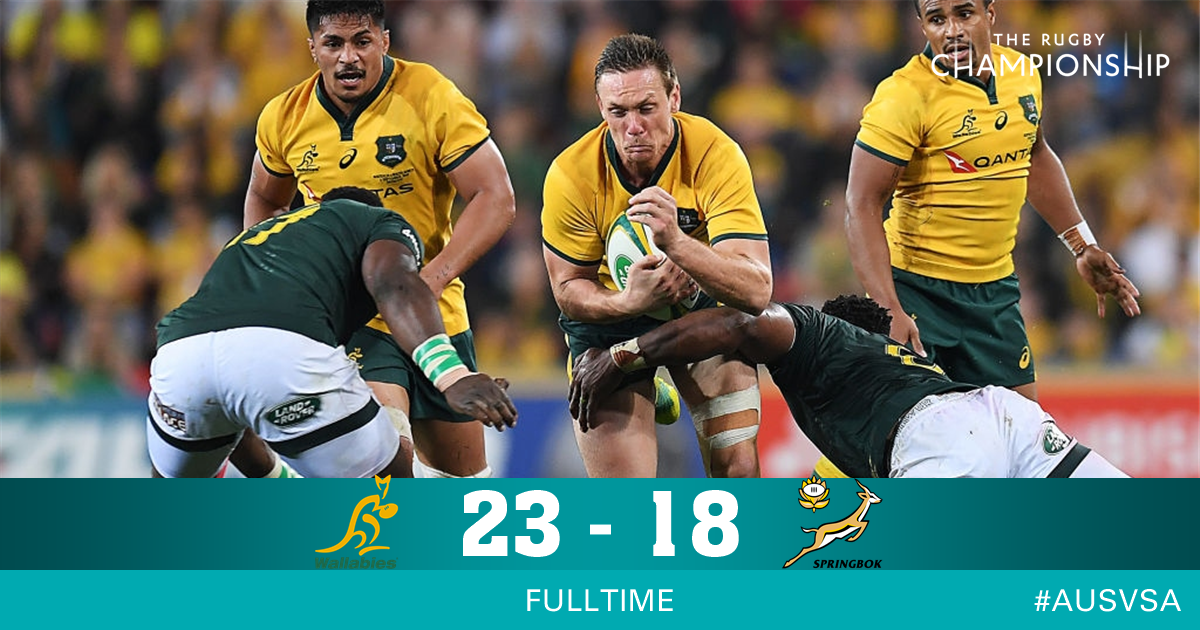