Wallabies coach Dave Rennie has made one change to his starting XV for the Second Test against France in Melbourne.

After a standout performance off the bench in Brisbane, Taniela Tupou has been elevated to the starting side for the Wallabies second eToro Test against France in Melbourne on Tuesday night.

The change in the front row is the only one made by Wallabies coach Dave Rennie, who has selected the same game day 23 for the first time in consecutive matches since taking the reins in 2020.

The damaging Tupou will combine with Queensland teammate Brandon Paenga-Amosa and 101-Test stalwart James Slipper in the front row, where a win will see the side retain the Trophée des Bicentenaires.

Returning Rebels lock Matt Philip will play at AAMI Park for the first time in over 12 months, partnering Lukhan Salakaia-Loto in the second row for the fifth time since Rennie took charge of the side.

After earning his first start in Wallaby gold last Wednesday night, Rob Valetini will again wear the number six jersey, with Michael Hooper to captain the side in the familiar openside flanker position.  Harry Wilson will wear the number eight jersey for the seventh consecutive Test.

Marika Koroibete will be looking to celebrate the birth of his third son with a strong performance on the left wing on the familiar turf of AAMI Park, with the electric Tom Wright and reliable Tom Banks rounding out the starting side. 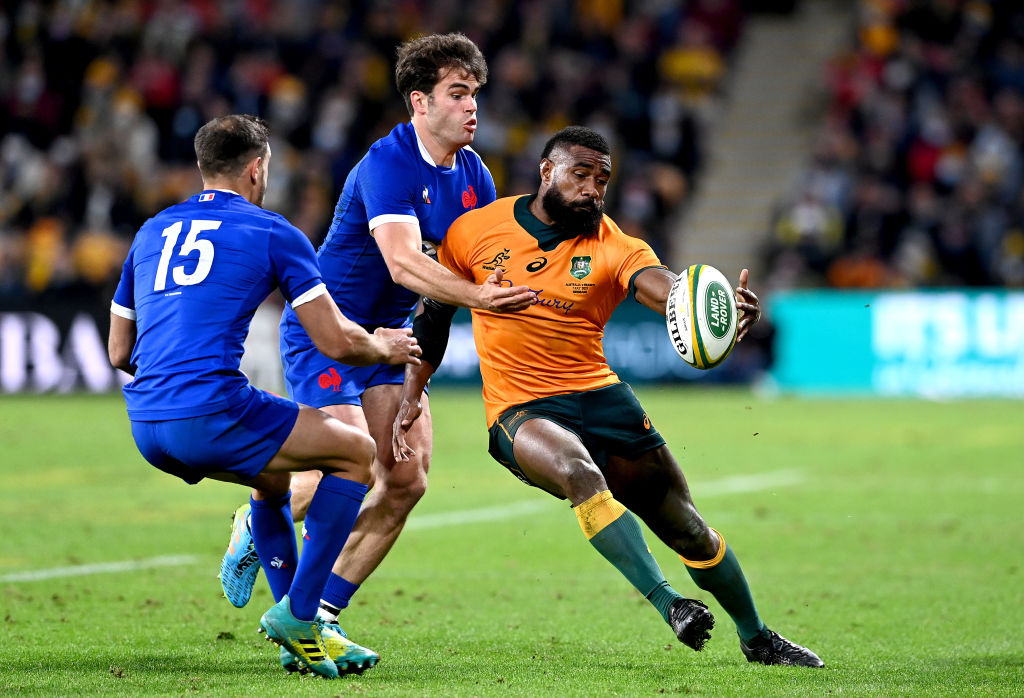 Following an impressive debut, Lachlan Lonergan has retained his place as the reserve hooker with youngster Angus Bell and the experienced Allan Alaalatoa the replacement props.

Darcy Swain was another who proved his impact on the International stage, retaining his spot as the finishing lock, alongside Isi Naisarani who will cover the backrow.

His effort to chase down the France lineout in the dying stages at Suncorp Stadium after the 80th minute proved to be the difference and the side will be looking for Tate McDermott to have the same impact off the pine in Melbourne as the reserve scrumhalf.

Len Ikitau is in line to become Wallaby no. 944 as the only potential debutant in the team, with Rebels flyer Andrew Kellaway earning his second opportunity for his country as the remaining back cover.

Wallabies coach Dave Rennie said: “Taniela made a real impact on both sides of the ball when he came on in at Suncorp Stadium and we’ll be looking for him to do the same from the get go in Melbourne.”

“We’ve worked hard and we’re well conditioned. A lack of accuracy in Brisbane denied us the opportunity to make the most of that, but we showed plenty of character to stay in the fight until the final whistle.

“We need to start fast, be more clinical and turn pressure into points at AAMI Park on Tuesday night.”

France coach Fabien Galthie made five changes to his team for the second Test against Australia at Melbourne, all of them in the pack, when he announced the side on Sunday.

Castres prop Wilfrid Hounkpatin and Stade Francais lock Pierre-Henri Azagoh both come into the side to win their first caps on Tuesday as Les Bleus attempt to level the three-match series. They are joined by Cameron Woki and Ibrahim Diallo in the back row with Bordeaux-Begles lock Cyril Cazeaux also coming into the side to form a new second-row combination with Azagoh who made just six starts in the Top 14 last season.

The Wallabies won the first Test 23-21 on Wednesday against a France side missing players from Top 14 finalists Toulouse and La Rochelle who would not have had time to complete Australia's coronavirus entry quarantine.

Galthie kept faith with his entire back division including rookie full-back Melvyn Jaminet whose error at the end of the match allowed Australia the chance to win the game at the death.

France have not won a Test in Australia since 1990. The third Test takes place in Brisbane on Saturday.